SABC board turns on chair 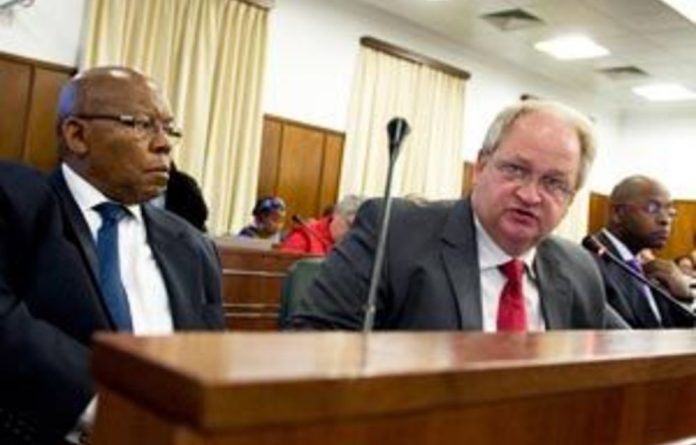 Three SABC board members — Clifford Motsepe, Desmond Golding and Cedric Gina — rounded on chairperson Ben Ngubane at a heated meeting this week, warning him that his “ill discipline” in speaking out against board decisions had become a national embarrassment, the Mail & Guardian has learnt.

The board members were enraged by Ngubane’s comment during an SAfm radio interview after their parliamentary appearance last week that he believed suspended group chief executive Solly Mokoetle should be reinstated in his job.

The controversial interview was flighted on a number of other SABC radio stations.

During the interview Ngubane also said he had not voted for Mokoetle’s suspension.

At Monday’s board meeting Ngubane was told he should not have used SABC resources to try to undermine the board’s decision to suspend Mokoetle. He had threatened the sustainability of the SABC, which must have a disciplined and cohesive board, the three members told him.

Board members claimed Ngubane was “very contrite” during the meeting and apologised for his actions. Respected deputy board chair Felleng Sekha resigned last month, but while recovering from a diabetic coma in hospital she told the M&G that she was planning to withdraw her resignation as Ngubane had shown a new willingness to work with board members and not to treat them as “the enemy”. She later declined to reveal why she had not withdrawn her resignation. “The only problem we have on the board is the chair and his conduct,” a board member said this week.

Attorney Motsepe, a nominee of the ANC Youth League, economist Golding, and Gina, the president of the metalworkers’ union’ Numsa, were all nominated to the board by the ANC. While Ngubane was also nominated by the party and chosen by President Jacob Zuma as chairperson, he threw the board into turmoil in May by unilaterally appointing Phil Molefe as news chief while candidates were still being assessed.

Ngubane told the M&G he would not comment on the meeting. “We issued a statement following the meeting,” he said. “All of us agreed that the comments contained in the statement would take care of what we wanted to say.”

This week’s board meeting was hastily assembled after Ngubane told Parliament last week that acting group chief executive Robin Nicholson had not been legally installed in his post, leaving the broadcaster vulnerable to litigation. But Nicholson later told the M&G that Ngubane had failed to sign off on his appointment.

As the broadcaster’s chief financial officer, Nicholson had been asked to stand in for Mokoetle after the board suspended the latter on 17 counts.

Last Friday Nicholson was asked to stay at home for the day until the board resolved the vexed issue of why Ngubane had not delegated authority to him. Members described Monday’s meeting as “horrible but necessary”. The SABC put out a statement that afternoon announcing that the board had approved the “reappointment” of Nicholson as acting group chief executive until Mokoetle’s disciplinary process was over.

Vote of confidence
The board’s vote of confidence in Nicholson follows reports that Communications Minister Siphiwe Nyanda is unhappy with him in his acting role as he was “the subject of an investigation and was found to have acted irregularly”.

Nicholson underwent a disciplinary process last December, following the release of an auditor general’s report on fruitless and wasteful expenditure at the SABC. As revealed by the M&G, the panel found cases where administrative processes had been flouted, but no wasteful expenditure, fraud or corruption.

By appointing Nicholson until Mokoetle’s disciplinary process is complete, the board no longer has to entertain the controversial idea of amending the SABC’s articles of association to accommodate an outsider. Answering the M&G‘s questions, Nyanda said the board had discussed recommending that broadcasting veteran Lulama Mokhobo should be appointed as acting group chief executive, and it had been proposed that he amend the articles of association for this purpose.

However, Nyanda said he had instructed the board to “properly resolve the matter” and advise him. A former SABC public broadcasting division chief, Mokhobo quit the corporation in June and is said to be Nyanda’s choice for the post.

Former interim board chairperson Irene Charnley said this week that Mokhobo was shortlisted with Mokoetle for the post of chief executive and did “extremely well” in interviews.

“She was a very good candidate with a proven track record and ran a profitable division,” said Charnley. “I would fully support a person like Mokhobo.”

Last week Mokoetle told the M&G that if Mokhobo was appointed while his disciplinary process was pending, it would amount to constructive dismissal. “Somebody wants to make me very rich,” he said. Board members said that if a new appointment was made after Mokoetle’s disciplinary hearing next month, the process would include advertising for candidates and interviewing them.

The M&G has established that Mokoetle’s appointment was governed by a performance-based contract, unlike some in the past, with particular requirements linked to treasury’s R1,47-billion guarantee for the beleaguered broadcaster.

A R1-billion draw-down was made immediately available to settle urgent debts, but the remaining R473-million is still subject to the broadcaster presenting clear revenue targets and cost-cutting measures. The board cannot afford further resignations until the four who quit — Barbara Masekela, Magatho Mello, David Niddrie and Sekha — are replaced. As President Jacob Zuma took the unusual step of discharging them with immediate effect, their departure poses a threat to meeting quorums.

The chairperson of Parliament’s communications committee, Ismail Vadi, told the M&G the committee had faith that those remaining would understand the “delicate issue” and continue serving their country.

Motsepe declined to speak to the M&G about the meeting, while Gina and Golding were not available.

‘We can only try our best … and we are improving’
The SABC board was given a whipping in Parliament for the second week in a row when it appeared before public spending watchdog Scopa to discuss the broadcaster’s 2009/10 annual report on Wednesday.

The presentation the board had prepared for Scopa was not tabled because committee members wanted to question it about what action had been taken on the damning auditor general’s report of last year.

The report found the SABC awash in fruitless and wasteful expenditure, non-compliance with reporting requirements, and irregularities. As most of the serious abuse has been referred to the Special Investigating Unit, the board could say little about individual cases.

The overwhelming complaint from Scopa members was that the board had given them no assurance that it understood the concept of fiduciary responsibility to shareholders and accountability for all transgressions.

Committee chairperson Themba Godi urged board members to answer questions honestly. “Say it as it is,” he said.

When the board appeared before the communications committee last week, its chairperson, Ismail Vadi, said that it could not receive presentations of the board’s performance review for the current year because of its dismal failure to submit relevant documents.

This week seemingly crestfallen SABC chairperson Ngubane said: “We have taken to heart all of the discussion today. We can only try our best and there is real sincerity in trying our best. But if obviously we are hopeless failures, well that is a different story. We have put in systems and the subcommittees are working and meeting all the time to try to answer all the issues in the AG’s report and to clean up the organisation. At the same time, we are trying to revitalise our commercial enterprises, bring in advertising revenue, which is rising by the way, and we are improving a lot.”

Ngubane said the board was also “trying to establish a pattern of behaviour within the organisation and these things take time”.