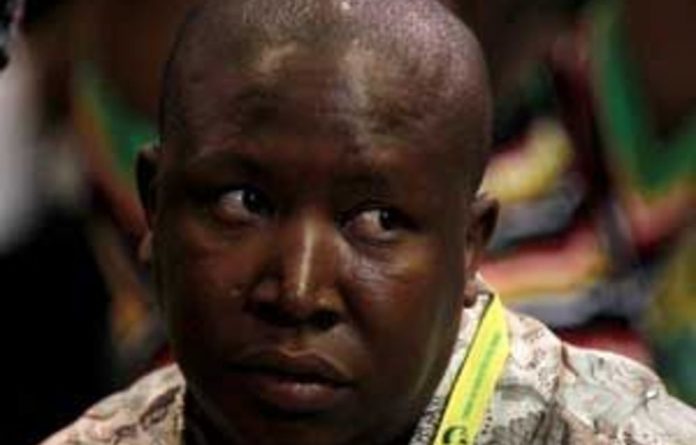 A curious statement released by the African National Congress Youth League (ANCYL) on Wednesday calling for the “closer’ of Twitter is fast becoming viral among South Africans on the popular social network.

And in an ironic twist, a fake Floyd Shivambu profile has been created in response to the spokesperson slamming such activity: @Floyd_Shivambu.

Twitter has been lambasted by the league for allowing the public to open accounts using the name of their controversial president, Julius Malema.

The league also stated that they had reported these issues in the past.

However ANC Youth League spokesperson Floyd Shivambu has previously been dismissive of fake Malema profiles on Twitter, saying when questioned about it in February: “We don’t follow up on petty issues. We have bigger battles to fight and this internet doesn’t even speak to our people.”

But several months later Shivambu, whose name appeared at the bottom of the statement for further contact, seems to be singing a different tune.

Several occasions?
“The ANCYL has in [sic] more than one occasion reported these impersonators and hackers, yet no action has been taken against them by the Twitter administrators. We will now approach the relevant authorities to report these hackers and call for the closer [sic] of Twitter if its administrators are not able to administer reports for violation of basic human rights and integrity.”

The statement ended on a strong note to offenders, which had users on Twitter shaking their digital heads in disbelief.

“Those who are hacking systems and impersonating the ANCYL leadership should immediately stop doing so because the laws of this country will come very hard on them.”

@LiamLynchPhoto added: “THIS JUST IN: ANCYL takes on Internet; defeated in end by Imperialist spell-checkers.”

The bad spelling, which ANCYL statements have become known for, earned many comments. “ANCYL statement called for ‘closer of Twitter’ following ‘cretation’ of fake accounts. Was that so we’d know it was the real Malema?” asked @JonahFisher.

Verification solutions
Twitter, the micro-blogging service where fake or spoof accounts have flourished like mushrooms after the rain, is in the process of testing verification solutions for public figures, governments and organisations. Known as “phweeting” (phony Tweeting), satirical Twitter accounts of world leaders include everyone from George W Bush to Kim Jong-il and Osama Bin Laden.

The Mail & Guardian had reported on a similar incident last month, when an article on the hoax profile of Cosatu spokesperson Patrick Craven raised the ire of the trade union.

The Police and Prisons Civil Rights Union (Popcru) was left red-faced after releasing a media statement that construed the article as an “unlettered and unpalatable attack” and, like the youth league, called for a government crackdown on social networks.

“Perhaps, it is ideal that we must accelerate the realisation of government instruments such as Media Appeal Tribunal to deal with media houses that may attempt to misuse their space for unsound and/or harmful writings,” said the statement.

Arthur Goldstuck, managing director of technology research organisation World Wide Worx, said the reaction highlights a staggering lack of awareness of how the media functions, of how the internet works and of the media’s role in reporting on the internet.

Implying that a media tribunal could regulate the internet showed a “blissful ignorance about the nature of the environment they’re going up against,” he said.

“It also emphasises the need for any organisation working in the public space to get up to speed on the changing nature of communications, social media and social networking,” he said.

South Africa is still playing catch-up in the social media game. The only party with a major online presence is the Democratic Alliance (DA). DA leader Helen Zille, for example, has her own Facebook and Twitter profiles. And although there are a number of fake profiles for high-ranking ANC officials, the only ANC member with a thriving net presence at this point appears to be former government minister Jay Naidoo.

Creating a fake Facebook profile is incredibly easy. All you need is a name and an email address, and you’re set.

Among the known fake profiles of public figures out there are JuJu Malema — “I firmly believe it’s the right of every man, woman & child to love me and obey me & serve me equally as I rise to become Africa’s next great dictatah!” — and Bob Mugabe, who has commented on everything from Blue Bulls player Bees Roux’s arrest to US pastor Terry Jones’ threats to burn the Qur’an.

Security
In the digital age, it is becoming more important for people, particularly those in the public eye, to secure their online presence against impostors. Peter du Toit, co-founder of Social Media IQ, a new media consultancy and training company, had this to say: “It’s a new world. Public figures especially need to claim their names online or risk a fiasco.”

Pria Chetty, founder of Chetty Law, a specialist technology law firm, warns that the consequences of creating a fake Facebook profile are severe. The offender could be sued by Facebook for violating its terms of use, criminally prosecuted under the Electronic Communications and Transactions Act because of the fraudulent profile information, or sued for defamation by the aggrieved person.

The person could also “claim damages suffered as a result of the attack on their character. This could for instance include loss of earnings if the person subsequently loses their job,” Chetty told the M&G.

But Twitter is not known for shutting down fake accounts. In fact, satirical accounts are among the most popular on Twitter. Instead, the platform enables public figures and celebrities to verify the authenticity of their identities. Verified accounts bear a blue tick mark on the user’s profile page, just above the user name.

“The organisation at the very least must be driving that process if the individuals don’t know how to do it, if anything simply to reserve those names for a time when they are ready to use it,” said Goldstuck.

Twitter: It’s the satire that counts
@jacobzuma: just got letter from SA Council of Churches, condemning my Media Appeals Tribunal. But it’s ok for them to have the Inquisition. Hypocrites.
@realjacobzuma: Team-I welcome letters from the media. Mostly because I’m now banned from using the Constitution as a firestarter.
@RealRobMugabe: Congrats @Ralf_Ho! You’re my 800th genuine follower! You are now the lucky owner of a white man’s farm.
@theUSpresident: Sometimes I get the feeling the press just wants to see me without a shirt on.
@FakeSarahPalin: DO NOT MOCKLE OR QUESTIATE MY USE OF THE AMERICISH LANGUAGE. K? SRSLY>