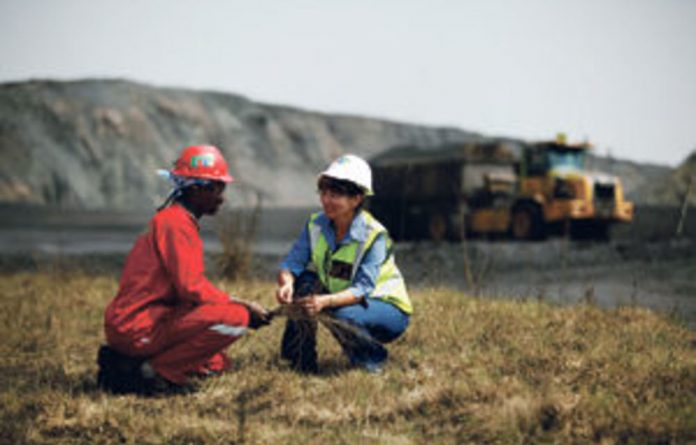 Mining and environmental sustainability make strange bedfellows. A mining operation, by its very nature, is neither sustainable nor is it environmentally friendly.

It requires the removal of a nonrenewable resource. But, green mining does exist, looking beyond day-to-day operations and offsetting of a mine’s footprint by investing in the environment and the community. The effective management of social and environmental issues during a mine’s life cycle ensures that its impact is minimised.

Mark Botha, the head of the WWF Living Lands Unit, says: “Mining entails giving a shared heritage to a private concern to make profit. The main issue regarding sustainability in mining is to ensure there is sufficient value for the public and not just for shareholders.”

He describes the current approach as very administrative and says it doesn’t result in the right outcomes that would benefit the broader public. “For example, it shouldn’t be about ticking a box because an environmental management plan (EMP) exists. [Rather] does the EMP contain the right measures and has it been scoped properly? Implementation should be monitored more carefully.”

Botha also says that South Africa is greatly underperforming in terms of water regulation and the pollution of resources. He points to the need for the right inspectors and effective penalties, noting that the current penalties are trivial in the face of the significant profits that many mining houses make.

Much of the environmental authorisation process was supposed to be moved into the National Environmental Management Act 1998 (Nema), aligning the environmental impact assessment requirements for mining with other types of development, but, the legislation is in a state of flux.

Melissa Fourie, the executive director of the Centre for Environmental Rights, says that a formal agreement between the departments of mineral resources and environmental affairs was codified into legislation that was passed by Parliament “but [Susan] Shabangu, minister of mineral resources, decided not to bring her part of this legislation into effect, thereby creating a stalemate between the departments …

It raises the question whether it is democratically acceptable not to put into effect legislation passed by the legislature.” Fourie says that the environmental assessment requirements in the MPRDA are inadequate. There has been less collaboration and research into mining environmental regulations, she says.

“The public participation requirements are far less stringent for mines and the MPRDA requires an environmental impact assessment (EIA) be completed within six months but you cannot complete a proper scientific assessment in that time.” Fourie says that mining poses an enormous threat to South Africa’s natural resources. “Mining is the single biggest generator of solid waste, most of which is hazardous, and pollution from mines is the biggest single threat to South Africa’s water resources”

She suggests more comprehensive collaboration between the mining industry and the government is required for this to be resolved because the legacy issues of 120 years of mining without proper environmental controls are so big. The issue, according to Fourie, is around compliance. “We have no guarantee that mining companies are in compliance with environmental legislation.

It’s extremely difficult for civil society organisations to get copies of mining permits, and the department of mineral resources regularly refuses to provide information about environmental compliance and enforcement action taken against mines,” she says. ‘There is a historical culture of secrecy around mining. We also know that the department is very under-resourced when it comes to compliance monitoring.”

Although Botha agrees with this lack of transparency, Stephainah Mudau, the environmental adviser at the Chamber of Mines, does not and says she has no problem obtaining publically availabe information from the government. “The role of the Chamber of Mines’ environmental department is to provide advisory services around policy, research or any issues regarding sustainability and environmental impact in the mining sector,” says Mudau.

She believes South Africa’s mining industry has environmental management policies that are among the best in the world. “There is a serious commitment to comply with national legislation and international standards. The larger mining houses are mostly self-regulating and the Chamber of Mines’ position is for maximum compliance.”

She agrees that there are practical challenges in terms of enforcement and compliance and that it’s an issue of capacity, common to most government departments, but, she does not agree with Fourie’s assessment of mining environmental requirements.

“The requirements are even more robust and comprehensive than for other sectors. They apply throughout the life cycle of the mine — which is not the case for other industries — and there is also ongoing monitoring,” says Mudau. “While the MPRDA does provide a six-month time frame for the EIA, the regulators also allow for extra time where needed.”

But Mudau views the duplication of environmental legislation and regulated activities as one of the biggest challenges. “Mining companies now have to fulfil the requirements of MPRDA and Nema which requires a lot of resources. This leads not only to duplication but [also] confusion.”

Another challenge is the management of acid mine drainage, specifically because of the legacy issues. “Mining companies that disappeared a long time ago did not rehabilitate their mines and this creates a burden for the state and mining houses operating in the areas concerned,” she says.

Botha believes that the environmental management standards applied by most of the major mining companies are good. “These are mostly large global companies that operate according to international standards and that recognise the benefits of long-term shareholder gain.”

The concern is about the smaller companies, which may not have sufficient financial resources and skills, especially the new companies. “Often, they are not in it for the long term and have no environmental track record,” says Botha. “New companies should be held to a performance standard linked to a bond. If they don’t meet the requirements, they lose the funds in the bond.”

Further suggestions for green mining improvement include doing more to offset the mining houses’ footprint. “While most groups are happy for the mine to rehabilitate the directly affected area, there is always a residual impact,’ says Botha. “Mining companies could be improving natural systems, such as threatened ecosystems and stressed catchment areas, beyond the actual site.”

Botha says companies should be looking at the true cost of sustainable mining. “There needs to be accurate quantification of financial provisioning. Funds are not sufficient nor are they used for the right purposes. It would stop short-term mining houses from entering the market.” Change will continue to be driven by the investors, says Botha.

Bryony Walmsley, the director of the Southern African Institute for Environmental Assessment, says there is a lot of scope for mining to make operations more sustainable. “Companies could be more creative. They should also be more focused on the impact of current operations, such as energy and carbon dioxide reduction and the conservation of water,” she says. “It’s not just about post-mining sustainability.”

‘Innovation is more than R&D’

Home is where the warranty is