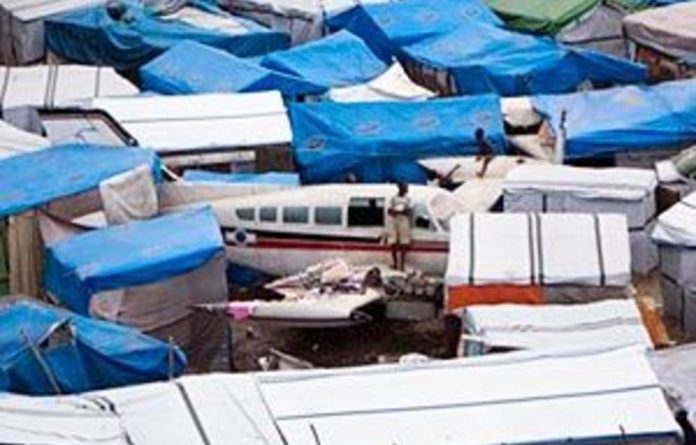 Haiti reeled from a spike in cholera deaths as authorities planned mass evacuations from squalid tent cities ahead of a major storm set to lash the Americas’ poorest nation, beginning on Thursday.

Tropical Storm Tomas was barrelling toward Haiti, threatening a direct hit early on Friday as a hurricane bringing “life-threatening flash floods and mudslides over mountainous terrain”, according to the US National Hurricane Centre (NHC).

A hurricane warning was issued, which means hurricane conditions are expected in the affected area within 24 to 36 hours, while tropical storm-force winds and rain were expected to buffet the Caribbean nation from late on Thursday.

“These conditions make outside preparations difficult or dangerous, and preparations to protect life and property should be rushed to completion,” the Miami-based centre warned.

To communicate his sense of urgency, President Rene Preval set out on a nationwide tour to get people living in high-risk areas to evacuate, as authorities closed schools and urged locals to relocate to safer ground.

“We have decided to shut schools temporarily ahead of the storm, because some of them will be used for shelters,” explained Miloudy Vincent, a top aide to the education minister.

But it won’t be easy: some of the 1,3-million already displaced residents of tent cities do not want to leave without guarantees of safe shelter.

Vulnerable and exposed
At one of the largest camps, Corail Cesselesse, residents were already gearing up to protest on Thursday against being forcibly relocated.

Much of Haiti’s population of just less than 10-million is vulnerable and exposed in a country dominated by mountainous erosion-prone terrain. Many live beside rivers, their main water source, but risk being swept away in storms.

International partners raced to get much-needed supplies, as US naval commanders ordered the USS Iwo Jima to Haiti with humanitarian aid.

The amphibious ship is equipped with 10 helicopters and a crew of 1 600, including medical and engineering teams ready to assist in relief efforts after the storm strikes.

A cholera epidemic, meanwhile, is spreading in unsanitary camps for people still homeless after the massive earthquake that struck the impoverished nation in January. The epidemic has claimed 442 lives so far, with a total of 6 742 cases. — AFP