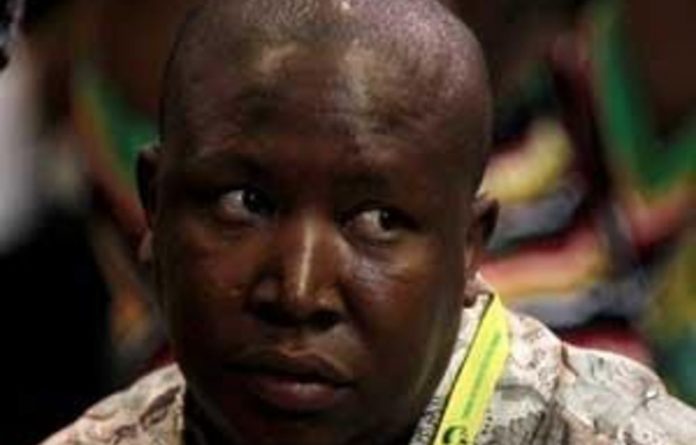 The African National Congress Youth League (ANCYL) may be serious about its warnings to those who create fake Twitter accounts in the name of ANCYL president Julius Malema, but it seems to be the only one taking it seriously.

After it announced its intentions in a press release to take action against the social networking site on Wednesday, the statement went viral, with many mocking its bizarre wording and grammar.

And, if one needed any proof that the warnings were not being heeded, new accounts, in the name of Malema, as well as Floyd Shivambu, the ANCYL spokesperson who composed the press release, were soon opened.

@Floyd_Shivambu’s first tweet was “Stop mocking my spelling. When we close Twitter you won’t be laughing anymore.” “Shivambu” was joined by @TheJuliusMalema, who tweeted “Don’t you come heer to my internet with your white tendencies.” This could be what prompted “Floyd” to tweet, “I will tell our President it is worse than we thought.”

The rules and regulations
But does the ANCYL have a leg to stand on, and should its threats be taken seriously?

Twitter does have a guideline regarding parody accounts, which it accepts as part and parcel of the social media platform. It states that the parody accounts should indicate that they are not the real person, or make it obvious that this is the case. It draws a distinction between “parody” and “impersonation”, where users attempt to fool people into thinking they are the real person. In its explanation of “Content boundaries and use of Twitter”, it says: “You may not impersonate others through the Twitter service in a manner that does or is intended to mislead, confuse, or deceive others.”

Furthermore, it states that accounts engaging in behaviours that violate the rules may be investigated for abuse. Twitter reserves the right to immediately terminate an account without further notice if the rules or terms of service have been violated.

The important point here is that a user can only be said to be guilty of impersonation if he or she intends to mislead.

This is sometimes seen in cases where someone sets up a fake Twitter account and tweets as if they are actually the celebrity they claim to be. Often these accounts gather hordes of followers, believing the Twitter account to be authentic. When brought to Twitter’s attention, such accounts are closed down.

However, Twitter has a more lenient attitude to satirical accounts, and a large number of them exist.

‘Let’s all agree to call it a whoopsie daisy’
One famous example of this is the BPGlobalPR account, which was started shortly after the Deepwater Horizon oil spill in the Gulf of Mexico. The environmental disaster caused havoc in the Gulf, killing sealife, destroying marine habitats and depressing the fishing and tourism industries in the surrounding areas.

The satirical BPGlobalPR account in turn created a public relations nightmare for BP. In May, one of its tweets stated “Catastrophe is a strong word. Let’s all agree to call it a whoopsie daisy.” But it was not shut down. In fact the account — which has more than 185 000 followers, and as of August this year had 10 times as many followers as the real BP account (@BP_America) — is still going strong.

Twitter even has special rules regarding parody and commentary.

These state that “Twitter users are allowed to create parody, commentary, or fan accounts [including role-playing]. Twitter provides a platform for its users to share and receive a wide range of ideas and content, and we greatly value and respect our users’ expression.”

It also states that Twitter does not edit or remove user content, except in cases where rules have been violated. Only fake accounts that “have a clear intent to deceive or confuse are prohibited as impersonation accounts and subject to suspension”.

BPGlobalPR, for example, tweets in a way that is obviously not standard practice for a global PR company. A tweet from October 19 stated “Chevron launched their ‘We Agree’ campaign today, calling on oil companies to clean their messes. Jerks.” So while the name and biography of this account may be misleading, there is no doubt that the tweets are satirical in nature.

Similarly the Malema and Shivambu accounts that exist are obviously satirical in nature. Very few people would be misled into thinking that these accounts are managed by the ANCYL, so the owners of the accounts cannot be said to be violating Twitter’s rules.

And if Twitter doesn’t shut down an account that takes the mickey out of a global conglomerate, it’s unlikely the social network will have much sympathy for the ANCYL.