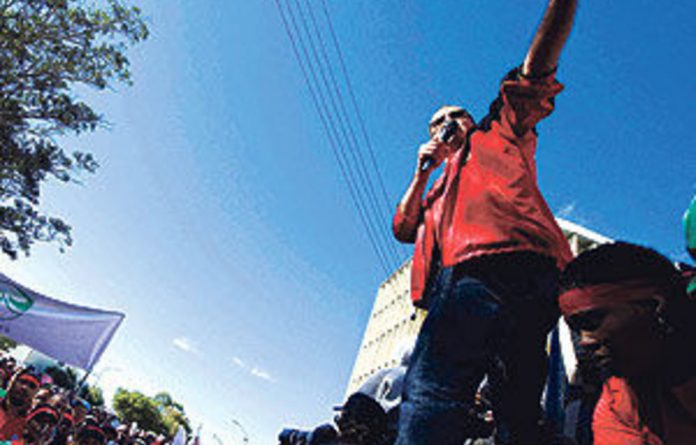 In the bitter fallout over its participation in last week’s civil society conference, Cosatu is torn between its alliance partner, the ANC, and 56 civil society organisations that expect it to give them access to the ruling party.

Cosatu, the Treatment Action Campaign (TAC) and health lobby group Section27 held a conference for non-government groups in Ekurhuleni in October, during which the government’s shortcomings and ways of redressing these were aired.

In an uncharacteristically emotional response the ANC accused Cosatu of following Zimbabwe’s Movement for Democratic Change and rejected the trade union federation’s plea that the conference was not about cementing opposition to the ruling party.

The conference agreed that 2011 will be a year of “mass mobilisation on economic policy and against unemployment, poverty and inequality”.

The municipal elections are due to take place next year and Cosatu traditionally plays a key role in supporting the ANC’s election campaign.

A source who helped craft the election strategy said the plan had failed to pass muster because it was too “national”, particularly on job creation. “The plan said how many jobs we have created overall since the last election. But people don’t want these broad generalisations; they want to know what’s changed in their localities.”

ANC spokesperson Jackson Mthembu said Cosatu had used the conference to rally support for its economic policy proposal, which was not considered at the ANC’s national general council, to put pressure on the ANC to accept it. “We never entertained it because the ANC is not a socialist organisation,” Mthembu said.

“They think if they can come up with the numbers of people who support their viewpoint, it will be the order of the day. That is why they are trying to mobilise others.”

Conference delegates endorsed Cosatu’s “Growth Path for Full Employment” document, saying it should serve as a “weapon of ­empowerment”.

He also took issue with Cosatu general secretary Zwelinzima Vavi’s reference at the conference to a “predatory elite” in the ANC. “If you don’t name names, you’re saying it’s all of us,” he said.

Cosatu president Sdumo Dlamini was taken aback by the ANC’s harsh response to the conference.

Conference declaration
“It would seem they have some information, which we don’t know about, that is making them act in this way,” Dlamini said, adding that Cosatu leaders would meet later this month to discuss the conference declaration and Cosatu’s further involvement. “Our central executive committee may say yes to certain things and no to others,” he said.

Cosatu’s conference co-hosts are, however, planning to hold the federation to account for the commitments it made at the indaba.

“We’re using them because they have better access to the ANC,” said TAC chairperson Nonkosi Khumalo.

“We’re hoping they won’t run scared now, but if they do we’ll remind them of their mandate — that it is not to the ANC but to the working class.”

Khumalo remarked that the ANC under Mbeki used to react in a similar way to civil society gatherings.

“They would say we’re funded by outsiders. But this conference was paid for by the TAC, Cosatu and Section27.”

Earlier this week Mantashe said organisations that originally funded liberation movements now funded “the division of liberation forces”. “The funding is normally directed to organs of civil society with an aim of forming opposition parties,” he said.