Qantas says A380 engine failure may be ‘design issue’ 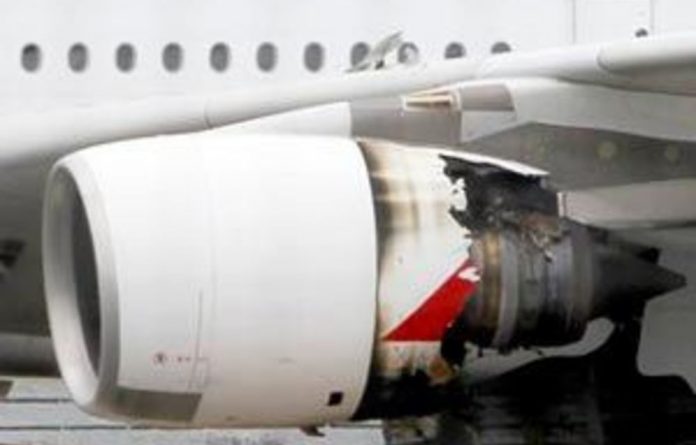 A faulty part or a design issue may have caused the explosion in an engine on a Qantas Airways Airbus A380, forcing it to make an emergency landing in Singapore, Qantas chief Alan Joyce said on Friday.

The engine failure on Thursday, which scattered debris over an Indonesian island, marked the biggest incident to date for the world’s largest passenger plane, in service only since 2007.

It forced Qantas to ground its fleet and other airlines to recheck their own A380s.

“We believe this is probably most likely a material failure or some sort of design issue,” Joyce told a news conference in Sydney.

Qantas has grounded its fleet of six A380s pending safety checks, which will take 24 to 48 hours to complete.

“If we don’t find any adverse findings in those checks the aircraft will resume operations,” said Joyce.

The Australian Transport Safety Bureau said on Friday there was no indication foul play had contributed to the incident on the Sydney-bound flight.

Singapore’s clearance of its 11 A380s — the second largest fleet in the world after Emirates — will be a relief for Airbus and engine maker Rolls-Royce, which lost more than $1,5-billion in combined market value on Thursday.

EADS shares gained 1% on Friday, after Thursday’s 4% fall, while Rolls-Royce shares fell a further 1,6% after a 5% slide the previous day.

German airline Lufthansa said it had withdrawn an A380 from a flight from Frankfurt to Johannesburg because it did not have enough time to check the engines before departure.

British A380 engine maker Rolls-Royce issued a statement urging operators of the aircraft to perform safety checks on its Trent 900 engines.

In a statement, EADS also told A380 operators using Rolls-Royce engines to have them inspected.

Airbus sales chief John Leahy told Reuters on the sidelines of the Chinese signing ceremony in Paris that he had not received any pressure from airlines about the A380’s safety.

“We have to find out the reason for the engine failure. The aircraft is operating the way it is supposed to,” Leahy said. One passenger aboard flight QF32 reported hearing a “massive bang” while photographs of the engine showed its outer, rear casing had been torn apart.

“The fact that it survived the damage is a credit to the design. Twenty years ago that would probably have taken the aircraft out of the sky,” said John Page, senior lecturer in Aerospace Engineering at the University of New South Wales.

Passengers also reported that a second engine on the stricken Qantas aircraft failed to shut down once on the tarmac, sparking fears it could ignite spilling fuel from the failed engine.

Second engine problem
Qantas chief Joyce confirmed the other engine had failed to shut down after landing but said it could have been affected in some way by the first engine mishap, which caused parts to fly off. “We are still investigating the causes of that,” he said.

Passengers said after landing they had been warned of the dangers of using any electronic device, as fire fighters sprayed the aircraft which was leaking fuel from a hole in the wing.

“Obviously in the back of your mind you’re concerned about a very hot engine next to leaking fuel,” passenger Christopher Lee said. “Obviously you’re in a state of anxiety.”

Qantas said its engineers, along with those from Airbus and Rolls-Royce, were working non-stop to determine what went wrong.

“Rolls-Royce have identified a number of potential areas,” said Joyce. “This issue does not relate to maintenance.”

Rolls-Royce had maintained the engines since they were installed on the aircraft, he added.

Qantas’s shares ended down 1% at Aus$2,86, underperforming the broader market which advanced 1,2% to a six-month high.

Commonwealth Bank aviation analyst Matt Crowe said there was unlikely to be any longer-term reputational damage, as investors had tended to “move on” from previous safety incidents, which have never resulted in a fatal crash for Qantas.

Joyce said it was too early to assess the financial impact of grounding its six A380s, but Crowe estimated the grounding could cost up to Aus$20-million in revenues if the planes remained on the ground for a week.

By comparison, the volcanic ash cloud that disrupted European air travel in April this year lasted about two weeks and cost Qantas Aus$46-million in costs and lost revenue. — Reuters