Why we need new colleges of education 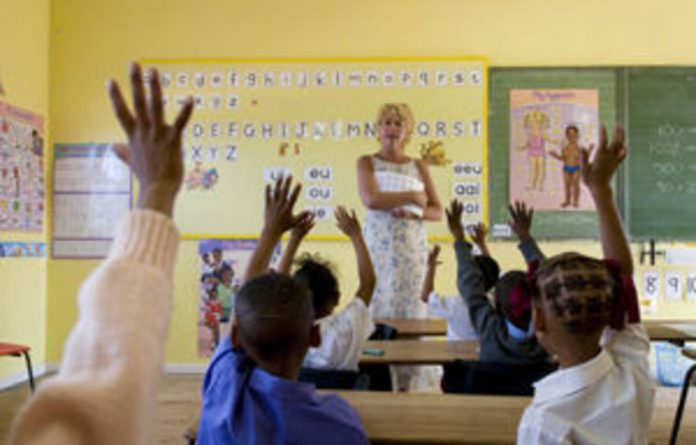 Yet what is being forgotten is that whatever the results turn out to be, their causes will lie in the past when the foundations for the present achievements should have been laid.

Consistently disappointing matric results and South Africa’s dismal showing in comparative international studies suggest they have not. The significance of the foundation phase (grades one to three), particularly for cognitive and language development, has been overshadowed by the heavy (and warranted) emphasis on the plight of maths and science.

The crisis, if we can call it that, is that — unless the situation confronting teacher training, especially for the foundation phase, is not faced realistically now, all the changes to the curriculum, all the efforts to improve the quality of learning and teaching in the rest of the system and all the attempts to improve maths and science — the matric pass rate and the post-school success rate will be for naught.

‘Sitting on a time bomb’
We are sitting on a time bomb. Although there is a general state of hysteria regarding the matric pass rate and “mud” schools, one of the most significant elements in the educational mix is passing under the radar. The foundation phase is the most important phase of any child’s school career. It is then that the foundations are laid down for literacy, numeracy and reasoning, without which success in the more advanced grades is impossible.

While it is widely acknowledged that there are serious shortages of maths and science teachers, it is not as readily understood that the situation in the foundation phase is as bad, if not worse; neither is it recognised how catastrophic this is for the rest of the system.

It is manifestly clear that the present system of teacher training is failing to produce sufficient numbers of new teachers for the education system. The figures speak for themselves. Depending on which pupil:teacher ratios are used, the shortfall for 2008 was between roughly 9 000 and 27 000.

Why are teachers leaving the profession and why are so few joining it?

A landmark Human Sciences Research Council (HSRC) national survey in 2005 showed that of 21 358 teachers in 1 714 randomly selected schools more than half (55%) had considered leaving the profession. Reasons given were inadequate remuneration, increased workload, lack of career development, professional recognition, dissatisfaction with work policies and job insecurity.

A parallel report by a ministerial task team, Educator Attrition and Mortality in South Africa, provided the first overview of trends based on primary data contained in government payroll databases and registers. Approximately 21 000 teachers had been leaving the profession annually for the preceding 10 years.

There is no reason to believe that these trends have changed significantly; in fact, the most recent data largely confirm them. Whichever way one looks at it, demand has dramatically exceeded supply.

Even more alarming was the picture of mother-tongue teaching in the foundation phase — where it is most needed — drawn by the HSRC study. Of the total number of students registered in 2007 for initial professional education of teachers (IPET) qualifications, 21.8% were studying to become foundation-phase teachers, but only 5.3% of total registrations for IPET foundation-phase courses then were African.

Foundation of cognitive learing
Furthermore, African students accounted for only 7% (520) of student teachers then expected to complete foundation phase IPET programmes in 2008. These figures have severe implications for the future staffing of schools, not only in the foundation phase but also for the whole school system.

Children with an African language as their mother tongue are placed at an unfair cognitive and intellectual disadvantage from the moment they enter the school system because of the shortage of teachers trained specifically to cater for their language and cognitive needs. And, as the record shows, few of them ever overcome that disadvantage.

It is now widely agreed internationally that every teacher is a language teacher. This means that language development is central to the entire teaching, learning and cognitive process.

Unless teachers are adequately trained in, and are fully aware of, the language implications of the processes they are involved in while they are imparting knowledge, understanding and stimulating intellectual growth, they cannot maximise the contact time they have in the classroom. This applies as much to the teaching of reading and writing as it does to the learning of calculating and reasoning.

The teacher education system has to have the means to train dedicated, fully qualified foundation-phase and mother-tongue teachers of all our official languages in significant numbers if any headway is to be made in addressing the deficiencies within the system as a whole. Our universities can do little to remediate what should have been put in place in the foundation phase. It is, in fact, not their job to do so and drains significant resources that could be put to more productive use elsewhere.

Simply stated, from an economic point of view, the foundation phase has to be supplied with adequate numbers of qualified and motivated teachers. Inefficiencies at the foundation level are not only wasteful, they also replicate themselves ­exponentially throughout the entire system.

How did we get here? To ensure that the teaching profession became fully degreed, the government decided to close all 102 colleges of education identified in the 1995 National Audit on Teacher Education and make teacher education the province of the universities.

Teacher training became a national as opposed to a provincial competence, with the result that provincial bursaries were no longer available for students wishing to enter initial teacher training. This is one of the major factors that has resulted in a significant fall-off of students applying to train for the foundation phase.

While in no way detracting from the dedicated efforts of the university staff involved in foundation-phase teacher training, it must be said that the foundation phase demands teacher trainers who have extensive practical classroom experience at that level. Teaching methodologies for the foundation phase, as well as the personal, practical and organisational skills demanded there, are of a different order from those required by the rest of the school system.

The foundation phase does not need teachers with the kind of subject-specific intellectual and theoretical understanding that is necessary in the senior phase (grades 10, 11 and 12). It needs practical generalists with a rigorous understanding of applied language skills (reading, writing, speaking, listening and thinking) across the curriculum. Above all, it needs teachers who are sophisticated users of their own mother tongues.

What to do?
An HSRC media briefing when it released its 2005 study revealed that many youngsters who wish to become foundation-phase teachers are intimidated by the demands university study would put on them. This does not imply they are intellectually inferior to those who opt for university courses, but that they have different priorities and interests.

The university study of theoretical issues may carry a certain social cachet, but ignoring the highly complex nature of intelligence and the ways in which it can manifest amounts to a misplaced prejudice. The skills necessary for teaching effectively in the foundation phase are not gained from abstract theory, but are rooted in pragmatic practice.

What to do? A new, specialised foundation-phase four-year diploma needs to be created to be taught at a small number of fully resourced colleges of education, not universities, with qualified teacher trainers who have extensive ­classroom experience; and the diploma must be supported by a bursary scheme that would enable students to pay back their loans through service.

Before I am accused of harkening back to a romantic golden age, let me say that as one of the authors of the 1995 National Audit on Teacher Education, I am fully aware of how bad the vast majority of colleges then were. We must now move forward.

Foundation-phase teachers do not require university training. A four-year diploma, with special emphasis on classroom practice and language and thinking skills across the curriculum, taught by teacher trainers with appropriate, extensive and recent classroom experience would equip teachers adequately for the tasks they have to perform. Recruiting appropriately skilled teacher trainers will be essential.

The emphasis in the first three years of this diploma should be on subject content, practical subject-specific methodologies and classroom management. The fourth year should be spent in full-time mentored employment (with salary and benefits) in a school that has a reputation for excellence.

One of the problems with the present system is that students are graduating and going straight into dysfunctional schools without any extended experience of how a well-run school operates. It is no wonder then that so many quickly become demotivated and either conform to the dysfunctional school norm in which they find themselves, or simply leave teaching altogether.

It is impossible to fix the entire system in one fell swoop. It is essential, therefore, that the establishment of a limited number of specialised colleges of education dedicated to the foundation-phase be prioritised, as the greatest economies can be gained by attacking the problems in our school system at that level.