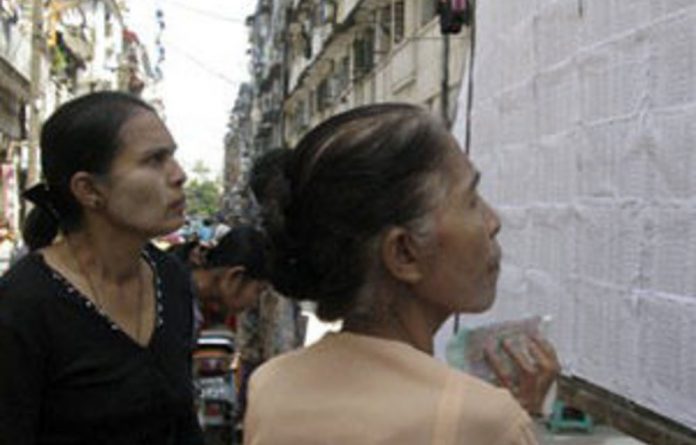 Confined to her crumbling lakeside home, long-detained Nobel peace laureate Aung San Suu Kyi poses little threat to Burma’s first election in 20 years on Sunday, but her possible release in a week could shake things up.

While the elections are drawing Western scorn for draconian curbs on pro-democracy parties and bans on foreign media, Suu Kyi’s scheduled release a week later gives allies China and South-east Asia a chance to praise Burma for a poll that otherwise faces widespread global condemnation.

Her release could also provoke grudging praise from the United States and Britain, and revive a debate over Western sanctions, although it remains unclear whether she will in fact walk free on November 13, when her house arrest is due to expire.

“What the generals do will send a message,” Britain’s ambassador to Burma, Andrew Heyn, told reporters in Bangkok this week.

“If the release is anything less than unconditional, that will make the [sanctions] debate different. We will be watching to see if this new government is old wine in new bottles or if it will be something different.”

Sunday’s ballot will see no real opposition to army-backed parties preparing to formalise decades of authoritarian rule in the former British colony.

It is unclear whether the government will run the risk of releasing the charismatic and influential figurehead of Burma’s fight for democracy, who has backed moves to isolate the regime.

Western governments have been typically guarded about their next moves if their demands for Suu Kyi and an estimated 2 200 other political detainees to be freed are finally met.

Critics say sanctions on the regime because of its poor human rights record have been a failure because Burma’s neighbours China, Thailand and India and other Asian nations have been pouring investment into the resource-rich country.

Splits on sanctions
Many US and European companies, aware of Burma’s vast natural resources and strategic location between China and India, are frustrated by the embargoes. Some are exploring how to navigate sanctions and it is almost certain there is pressure to review the sanctions and engagement policies.

Jim Webb, chairperson of a US Senate subcommittee on East Asia and one of the few Westerners praised by the Burma’s generals, said on October 27 Washington was split on whether to engage the regime and warned that with continued isolation, Burma would effectively become “a province of China”.

Sanctions aside, the role Suu Kyi might play, if freed, in Burma’s uncertain political landscape is a hot topic as new pro-democracy voices emerge to challenge what has effectively been her monopoly of the struggle against oppressive army rule.

Suu Kyi is still believed to have the same mesmerising influence over the Burmese public that helped her National League for Democracy (NLD) party win the historic 1990 election in a landslide, a result the military ignored.

The NLD boycotted this election because of restrictive rules governing a poll that Suu Kyi, who has spent 15 of the past 21 years in detention, said she “would not dream” of taking part in.

That stance has opened fissures within Burma’s anti-junta camp and put Suu Kyi and her now-defunct party on a collision course with pragmatists who see boycotts and confrontation as counter-productive.

Some breakaway NLD members formed a new party, the National Democratic Force (NDF), arguing that a tiny stake in the new army-dominated system was better than none at all.

“They see a window of opportunity opening up through the elections and have bravely shown that they are willing to handle all the hassle and provocation,” prominent Burma analyst and former diplomat Derek Tonkin wrote in a newsletter.

“They sense this is an historic moment which they should grasp, as the alternative of continuing confrontation in the traditional NLD style has led nowhere.”

But Aung Naing Oo, a Harvard educated Burmese academic, said it was unlikely Suu Kyi and her former party would fade away.

“Suu Kyi is still a threat to the generals, so they will still try to restrict her,” he said. “The NLD’s strategy will be to go underground, wait for the new government to make mistakes and take its chance to regain its political stake.” – Reuters