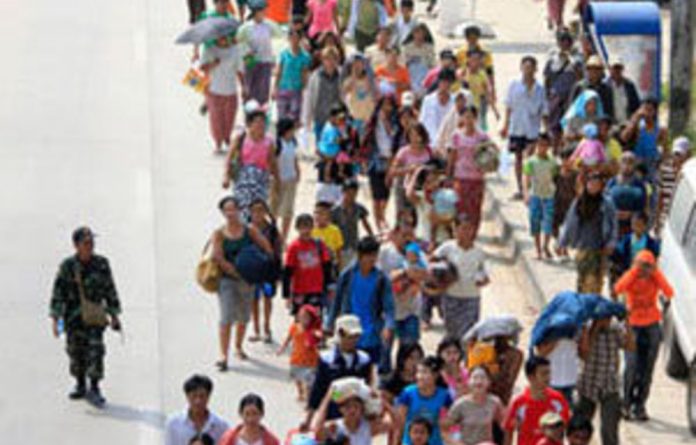 Burma’s main pro-democracy parties conceded defeat on Tuesday in the country’s first election in 20 years after the biggest military-backed party said it had won up to 80% of seats that were up for grabs.

The two largest pro-democracy parties accused the military junta of manipulating Sunday’s election, which has been condemned by the United States, Europe and Japan as a sham to entrench military rule behind a civilian facade.

The military’s political juggernaut, the Union Solidarity and Development Party (USDP), closely aligned with junta supremo Than Shwe, had won broadly nationwide, although official results have not been released, a senior USDP official said.

At least six parties have lodged complaints with the election commission, saying state workers were forced to vote for the USDP in advance balloting.

“We took the lead at the beginning but the USDP later came up with so-called advance votes and that changed the results completely, so we lost,” Khin Maung Swe, leader of the National Democratic Force, the largest opposition party, told Reuters.

The vote was held with Nobel laureate and pro-democracy leader Aung San Suu Kyi in detention and her party disbanded for refusing to take part in an election it said was unfair.

As the votes were counted, government soldiers cleared ethnic minority rebels from an eastern border town, a Burma army officer said, after clashes that sent about 17 000 civilians fleeing to Thailand.

The fighting erupted on Monday underlining the strains ethnically diverse Burma has faced for decades.

“We’ve been able to clear the town, especially the populated areas,” a Burma army officer told Reuters in Thailand by telephone from Myawaddy town.

He said 10 people had been killed and about 30 wounded in the clash in the town, a main gateway for trade on the 1 800km border with Thailand.

Worry over clashes
A clash also erupted along the border to the south, near the Three Pagodas Pass, and flared again on Tuesday, sending about 3 000 people fleeing into Thailand, a Thai official told Reuters. Several wounded civilians were among the refugees.

The rebels involved in the clashes are a splinter faction from a group that agreed peace with the government but balked at a bid to force them to join an army-run border security force.

Ethnic minority groups that have campaigned for autonomy for decades fear that with the election out of the way, the army will move to force them into line.

Analysts say more clashes could erupt in different areas including along the Chinese border.

China, building gas and oil pipelines from Burma to fuel its economy, does not want to see clashes disrupting commerce and triggering a flood of refugees and will be pressing all sides to avoid conflict, analysts say.

China has built up close political and business links with Burma while the West has for years shunned its leaders and imposed sanctions over the suppression of democracy and a poor human rights record.

US President Barack Obama said in a speech to India’s Parliament on Monday the Burma authorities had clearly stolen the election.

Burma’s neighbours and partners in the Association of South East Asian Nations (Asean) have been hoping the election would end the country’s isolation and remove hurdles it poses to greater cooperation with the West.

The Foreign Ministry of Vietnam, which this year is chairman of Asean, said the group welcomed the election as a meaningful step towards democracy, saying it urged Burma to “continue to promote progress toward reconciliation and democratisation”.

As the world marks victory over Japan Day, a remarkable story is told of a Nigerian soldier rescued by Rohingya villagers.
Read more
World

Burma's first sex education magazine has got the usually demure nation hot under the collar as it explores new-found cultural freedom.
Read more
Advertising
Continue to the category
Politics