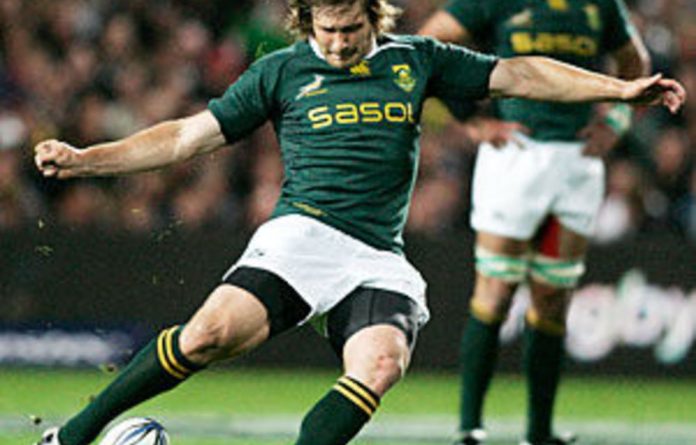 The Springboks have drafted Frans Steyn into the midfield for their Test against Wales at the Millennium Stadium on Saturday in the one change to the starting side that beat Ireland last weekend.

Steyn missed the 23-21 victory in Dublin that saw the world champions keep alive hopes of a first Grand Slam in 50 years after his French club, Racing-Metro, refused to release him for a match that fell outside the agreed International Rugby Board (IRB) window for November internationals.

The 23-year-old has replaced Zane Kirchner, who drops down to the bench.

“We pulled this team together at short notice for last week’s Test and they performed against Ireland, but we couldn’t ignore the experience of Frans Steyn,” South Africa coach Peter de Villiers explained. “He has only had two field training sessions with us to date so he is still slotting himself back in, but he has brought real enthusiasm to the squad and it’s a pleasure to have him back with us.”

Steyn is set to link up alongside Jean de Villiers after the former Munster centre trained on Tuesday despite concerns over an ongoing groin problem.

Meanwhile, stand-in captain Victor Matfield, leading the side in place of injured skipper John Smit, is set to become South Africa’s most-capped player when he runs out for his 103rd international appearance this Saturday, breaking the national record held jointly by Smit and Percy Montgomery.

Soft target
Wales were beaten 25-16 by Australia last weekend but caused the Wallaby scrum to give up seven penalties.

And De Villiers said he expected Wales — who’ve only beaten the Springboks once — would fancy their chances against a South Africa side that lost five of its six matches in the Tri-Nations.

“They have been bitterly disappointed on a couple of recent occasions when they felt they could have beaten us and they’ll be looking to put that right,” said De Villiers of a match that will also serve as something of a rehearsal for the two teams’ opening clash of next year’s World Cup in New Zealand.

“They’ll be hurting after losing to the Wallabies at the weekend and I’m sure they’ve targeted us as the soft target in their three matches against the Tri-Nations teams.”

De Villiers admitted: “We’ve had a tough year, but we’re only focusing on delivering another improved performance on Saturday and then the result should look after itself.”

The loose forward position on the bench has still to be decided as the Springboks wait on the fitness of Willem Alberts (calf strain).

*Note: TBC = To Be Confirmed