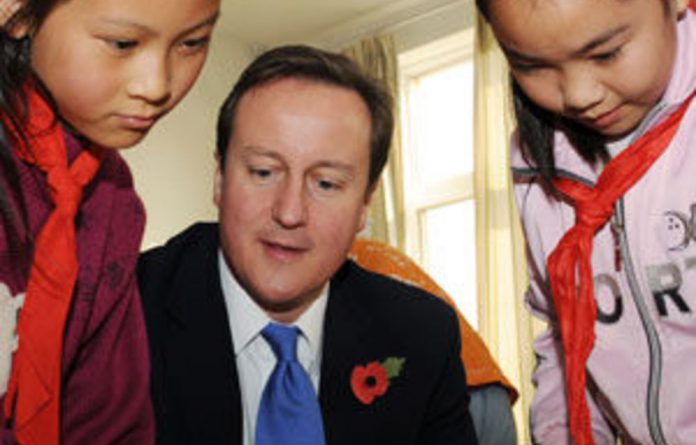 British Prime Minister David Cameron on Wednesday urged China to work closely with the G20 and introduce greater political freedoms on the final day of a trade mission shadowed by human rights issues.

Cameron said Chinese cooperation with the Group of 20 on trade and currency issues would “go a long way” to stabilising the world economy, but warned of a “dangerous tidal wave of money going from one side of the globe to the other”.

His speech at Peking University came on the eve of a leaders’ summit for the 20 biggest rich and emerging economies in Seoul set to be dominated by trade imbalances between China and the United States, plus a looming currency war.

The British premier — who is understood to have raised the case of jailed Chinese dissident and Nobel peace laureate Liu Xiaobo with Premier Wen Jiabao Tuesday — also urged “greater political opening” on human rights in China.

Cameron is the first Western leader to visit China since Liu was awarded the Nobel Peace Prize last month to the fury of Beijing and has faced pressure throughout the two-day trip to take a firm public stand on rights issues.

The speech, his final engagement in China, came following morning talks with President Hu Jintao and a visit to the Great Wall.

Rebalancing world economy
“If China is prepared to pursue further opening of its markets and to work with Britain and the other G20 countries to rebalance the world economy and take steps over time towards internationalising its currency, that will go a long way towards helping the global economy lock in the stability it needs for strong and sustainable growth,” Cameron said.

With China facing accusations from the West that it keeps the value of its currency artificially low to give its exporters an edge, the British premier also sounded a note of warning.

“The result has been a dangerous tidal wave of money going from one side of the globe to the other.”

He added that China “must” boost domestic consumption but acknowledged: “This cannot be completed overnight.”

Meanwhile, Hu gave a pre-G20 interview to South Korean media in which he said foreign countries should “face their own problems” and not cast blame elsewhere.

“China will try to run its own affairs and not blame its problems on others,” he said, according to China’s Xinhua news agency, which published the interview.

“China has attempted to avoid entanglement in global affairs in the past. But China’s size and global reach means that this is no longer a realistic choice,” said the 44-year-old, who took office in May.

Cameron’s visit comes a month before the Nobel Peace Prize ceremony in Oslo.

Countries including Britain have said they will not heed a Chinese call for Western diplomats to steer clear of the event. Beijing has said the decision to honour Liu is tantamount to “encouraging crime”.

Don’t want ‘megaphone diplomacy’
Liu (54) was jailed in December for 11 years on subversion charges after co-authoring Charter 08, a bold petition calling for democratic reform in one-party China that has been widely circulated online and signed by thousands.

Cameron insisted that being able to talk about human rights “makes our relationship stronger,” while acknowledging disagreements and differences between the two countries.

Defending his approach, a British official said such issues were “best raised in private — we don’t get into megaphone diplomacy but if there are issues to be raised, we will raise them”.

Cameron went into the trip, on which he took Britain’s biggest delegation of business leaders and ministers to China, saying he wanted to drum up deals worth billions of dollars.

Officials have not revealed a total figure for the amount of deals struck on the trip but it is thought to be in the low, single-figure billions of dollars.

The biggest deal announced was a $1,2-billion agreement between Rolls-Royce and China Eastern Airlines under which the British group will provide jet engines to power 16 Airbus A330 aircraft.

Cameron’s longer-term target is to double the level of trade in goods and services between Britain and China by 2015 from last year’s $51,8-billion.

His government is battling to reduce a record deficit having just imposed the steepest public sector spending cuts for decades. – AFP

A warder at a correctional facility has tested positive for Covid-19, sparking concerns about the effects of the pandemic on the whole system
Read more
Advertising
Continue to the category
Coronavirus