De Villiers puts Steyn at the centre of attention 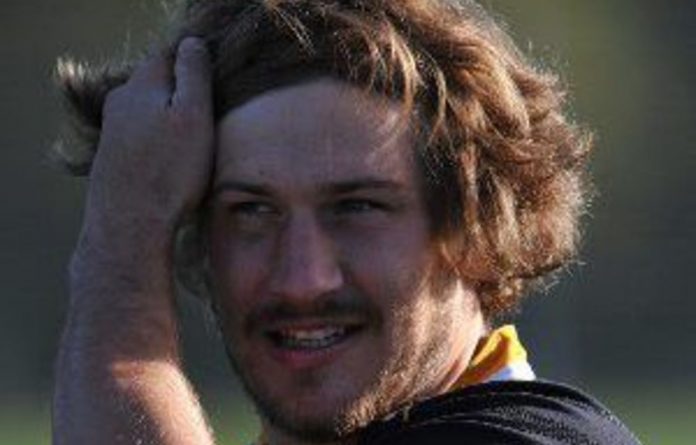 Springbok coach Peter de Villiers insisted he had no choice but to include Francois Steyn in the world champions’ midfield for their clash against Wales on Saturday.

Steyn, the one change to the Bok side that began a Grand Slam tour with a 23-21 victory against Ireland, missed last weekend’s match in Dublin after French club Racing Metro refused to release him for a fixture that fell outside the International Rugby Board’s November window for Test matches.

Zane Kirchner, usually a fullback, filled the midfield hole left by Steyn’s absence, while the Springboks’ missing centres, Wynand Olivier and Jaque Fourie, were among a list of 13 injured players who had to stay at home.

But Steyn is now available and De Villiers said his team simply could not afford to do without the 23-year-old’s star quality — despite the two of them having, at best, a strained relationship.

Steyn had said in late September that he was prepared to sit out the 2011 Rugby World Cup in New Zealand because of what he perceived as a lack of respect shown to him by De Villiers in cancelling several meetings. His ruffled feathers were later smoothed by a visit from another member of the Springbok management team.

De Villiers mum on spat
De Villiers made no mention of that when he explained why the youngster was back in the starting XV.

“You sit back and look at what a player is all about and if the talent is available you have to make use of it, you don’t want to leave talented players on the bench. Frans has that X-factor that is much-needed in games. He is a player who may be average for 60 minutes, but over 80 minutes he can pull something out of the bag.

“At this stage, with the World Cup around the corner, there are many things that come into consideration. What we saw of Zane was what we expected of him, we were not tested a lot in that area [by Ireland] but we were happy with what he did,” De Villiers added.

“Frans understands the defensive roles more as he has played the position more, and when a player like that comes back into the side he instils confidence in the players around him. There are two things you can’t buy in rugby. You can’t buy speed and you can’t buy talent, and Frans has that speed and talent.”

Steyn, who can also play at fullback or flyhalf, is set to partner Jean de Villiers in midfield after the former Munster centre trained on Tuesday despite a continuing groin problem.

Jean de Villiers looking forward partnership with Steyn
It is two years since Steyn started a test with Jean de Villiers alongside him since the 2008 loss to Australia in Perth.

But Jean de Villiers was looking forward to the duo resuming their partnership at the Millennium Stadium.

“With Frans being much more comfortable in the centre, Zane did a great job filling in there, but with the experience he brings it may mean we may change around a bit during the game,” Jean de Villiers said.

“He is a big physical boy at 110kg in the centre with great pace. But it will be tough, we know we are up against a great centre combination. They [Wales] haven’t named their team but the guys they can select from are very strong. We have played together a lot, maybe not in a 12-13 combination, sometimes he has been in the centre with me on the wing or he has been at full-back.

Team connection is vital
“But we have played together in different positions and the understanding is there and hopefully we can build on that and enter the game full of confidence,” Jean de Villiers added.

Stand-in captain Victor Matfield is set to become the most-capped Springbok of all time when he leads the side out for his 103rd Test appearance.

Wales, beaten 25-16 by Australia at the Millennium Stadium last weekend, are due to name their side on Thursday. — Sapa-AFP