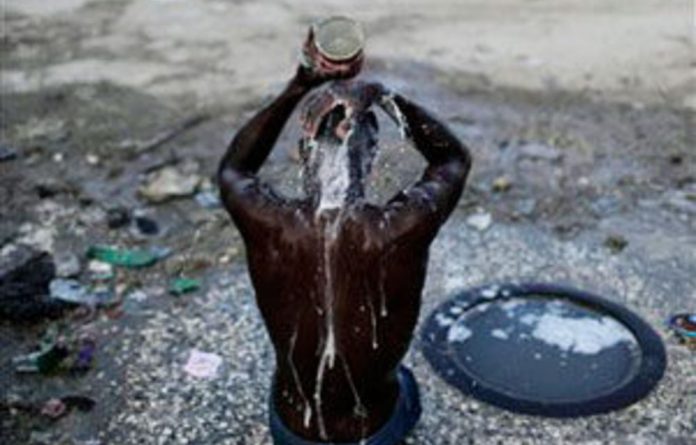 Haiti desperately sought on Wednesday to halt a cholera epidemic that threatens to spiral out of control after reaching the capital’s crowded slums, where 73 cases and one death have so far been recorded.

“The epidemic of cholera, a highly contagious disease, is no longer a simple emergency, it’s now a matter of national security,” the director of the Haiti’s health ministry, Gabriel Thimote, told a press conference on Tuesday.

Desperate scenes were described in the northern town of Gonaives, where about 60 people were said to have died in the past few days, many of them villagers who couldn’t make it to hospital as taxis wouldn’t take them.

“Sick people died on the way to the hospital, the bodies were covered in blankets and left near the town cemetery,” mayor Adolphe Jean-Francois said.

Deaths across the Caribbean nation soared close to 600 and Haitian authorities were warned to prepare for the worst if the acute diarrheal illness takes hold in tent cities crammed with earthquake survivors.

“Port-au-Prince is a large urban slum with very poor water and sanitation conditions. This is ripe for the rapid spread of cholera. We have to be prepared for it,” said top UN health official Jon Andrus.

Claude Surena, president of the Haitian Doctors’ Association, said that in addition to the one confirmed death in the capital, two more patients had died with cholera-like symptoms.

“These cases have not yet been confirmed by the laboratories,” he told AFP.

‘It’s coming’
Haitian health ministry chief of staff Ariel Henry said there was no large-scale outbreak in Port-au-Prince at the moment but warned: “it’s coming.”

The country’s first cholera epidemic in more than half-a-century surfaced in the Artibonite Valley in central Haiti on October 21, compounding the misery for a nation trying to recover from a devastating January earthquake.

Port-au-Prince has hundreds of makeshift camps where an estimated 1,3-million people displaced by January’s earthquake live in squalid and cramped conditions, sharing limited water supplies to cook and wash.

Authorities fear the bacterial disease, which is spread by contaminated drinking water or foods, could spread like wildfire through the camps and bring a second disaster to Haiti after the quake killed more than 250 000 people.

Although easily treated, cholera has a short incubation period and causes acute diarrhoea that can lead to severe dehydration and death in a matter of hours. — AFP