The battle over uranium: Just how bad is it? 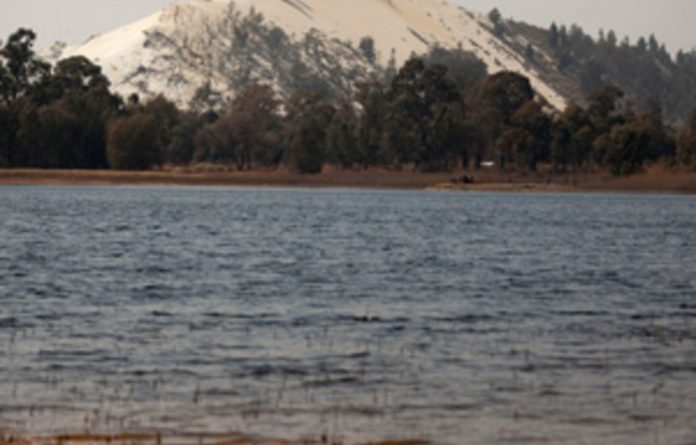 One of the most abundant heavy metals in the earth’s crust, uranium is a known radiological element and toxin. It is also a major by-product of gold mining, historically one of South Africa’s greatest economic undertakings. The country additionally began mining specifically for uranium in 1949, primarily for export to the United States and other nuclear-intensive countries throughout the Cold War.

As the conflict between East and West subsided, uranium mining waned, with the gold output from the Witwatersrand reef also declining. Today, hundreds of thousands of tons of uranium by-product sit in mine dumps scattered across the country, with 100 000 tons of the heavy metal in Gauteng’s Western Basin and Far Western Basin alone, according to Frank Winde of the North-West University at Potchefstroom.

Acid mine drainage (AMD) stemming from flooding mine basins or run-off from dumps can present a high rate of uranium contamination. In a 2009 paper, Winde states that the Wonderfonteinspruit, heavily affected by AMD decant originating in the Western Basin of the Witwatersrand, saw 3,6 tons of dissolved uranium dumped from 1997 to 2008, resulting in a 60% increase in the Donaldson Dam. The province’s radioactive Robinson Lake, also a product of Western Basin decant, shows levels more than 40 000 times the background uranium concentration for water, according to data from the National Nuclear Regulator.

Uranium has been linked to lung, bone and other types of cancers, including leukaemia, kidney failure, neurological defects including learning disabilities, immune suppression, birth defects, respiratory infections, and skin and eye allergies, according to the World Health Organisation (WHO). Most recently, uranium was found to be an endocrine-disrupting compound, meaning that it disturbs the natural activity of hormones, potentially affecting reproductive and immune function and acting as a carcinogen.

South African communities living near polluted waterways and mine dumps note increased rates of cancers, asthma, skin and eye irritation, kidney failures, birth defects, learning disabilities, and neurological disorders. Despite these complaints, “government hasn’t done any kind of epidemiological studies on highly affected areas like the West Rand to determine the pathways of pollution, of which there are numerous pathways — touch, drinking, airways — on human health,” says Democratic Alliance MP Gareth Morgan. “This is going to be a site of significant civil society action going forward and may very well result in significant civil claims in the future.”

Poorly understood
While the effect on health of high levels of uranium exposure are extensively documented due to the element’s use in major conflicts such as World War II and the Gulf War, effects from low dose, long-term exposure — such as those from contact with mine waste — are poorly understood. Due to lack of data, global uranium standards in drinking and agricultural water have varied over the years. Regulations also vary from country to country, with Germany recently reducing the amount of allowable uranium to 2 micrograms per litre, the lowest rate in the world. South African standards allow 70 micrograms per litre.

Critics contend that this variation is at least in part a result of pressure from the nuclear energy sector being dependent on uranium. According to Winde, the WHO raised the suggested amount of allowable uranium in drinking water when the International Atomic Energy Association (IAEA) noted an increase demand for the heavy metal and a resulting increase in price.

“That would imply that the WHO would somehow adjust its limits to meet the growing demand for uranium in a time when we need to satisfy that demand,” says Winde. While this is “disputable”, Winde points to a 1959 agreement between the WHO and IAEA in which both organisations promised to discuss their policies with one another before going forward.

A 2007 study by the German Society for Radiation Protection and the European Committee on Radiation Risk suggests that potential health effects due to low-level radiation have been severely underestimated, encouraging current estimations to be multiplied by a factor of 100 to 2 000. Studies have also primarily focused on radiological effects, rather than health effects resulting from toxicity, which can take place at much lower rates of exposure.

‘Proving cause and effect is hard’
Scientists suggest that comprehensive research is difficult to conduct. “In order to research this well you need to follow affected populations for 40 years or longer, but we’ve only know about uranium, or at least when using it in [industry], for 60 years,” explains Winde. The mobility of many mining populations further complicates, as well as the fact that “the latent period for some of the cancers is 10 to 40 years”, with other effects being cross-generational, continues Winde. “So to have proper epidemiological data … is difficult.”

According to Carin Bosman, former director of water resource protection and waste at the Department of Water Affairs, “proving cause and effect from environmental impact is one of the hardest things to do, and that’s what the mining companies rely upon. They say ‘these people will have liver cirrhosis because they drink and they will have messed up lungs because they smoke.’ It’s always other reasons why there’s a higher incidence of cancer, of stomach ailments … of learning disabilities.”

Given that the effects of low-level uranium exposure are still being studied, advocates claim that the precautionary principle as enacted under the New Environmental Management Act must be applied, in which the worse-case scenario is protected against.

Winde notes that as South Africa falls in line with the so-called global nuclear renaissance, sparked by an increase in uranium demand and pushing prices up tenfold between 2003 and 2007, old mine dumps are being re-mined for the metal, with other operations being set up primarily for uranium extraction, potentially creating new pathways of pollution.

“We are not very good at protecting the low-level, long-term exposure,” says Jo Barnes, an epidemiologist at the University of Stellenbosch. “If you contact little bits for every day for five years, 10 years, 20 years … will we see a drastic rise in cancers? Quite possibly, we don’t know. Will we see a drastic rise in liver cancer? Maybe, but we don’t know. We have to start preparing for the long-term now.”