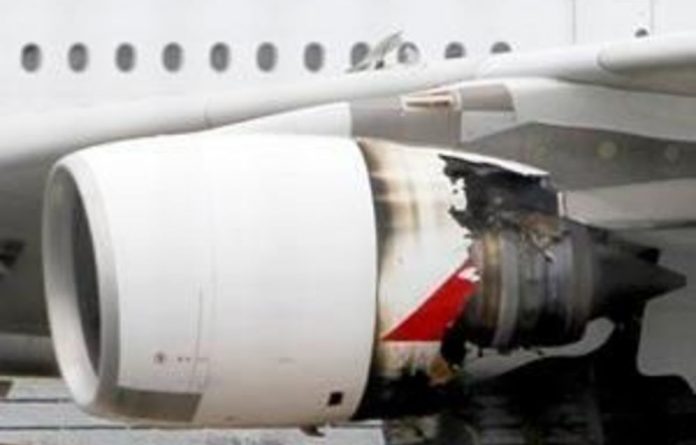 Europe’s aviation regulator said fire from an oil leak was the likely cause of last week’s engine failure of a Qantas A380 plane and ordered fresh inspections for superjumbos using Rolls-Royce engines.

Qantas grounded its Airbus A380 superjumbos until further notice on Thursday, a week after a mid-air engine blast prompted serious safety worries over the world’s biggest passenger jet.

The Australian carrier revamped its flight schedule to exclude the six flagship A380s, potentially for “weeks”, after the blow-out which also led to Singapore Airlines putting three of its superjumbos out of action.

Singapore Airlines, which also powers its A380 fleet with the Trent 900 engine, said it might need to substitute some of its A380s with smaller aircraft to meet the European directive for more stringent engine checks.

The Airbus A380 is the world’s largest passenger aircraft and has been hit by safety concerns after last week’s engine blowout, where a Rolls-Royce engine partly disintegrated mid-flight and forced the Qantas plane to make an emergency landing.

“Our A380 aircraft will still be grounded for the next 48 hours. At this stage we have no firm update when the aircraft will be in the air,” a Qantas spokesperson said.

The Qantas investigation has focused on oil leaks inside the Rolls-Royce engines.

“It would be fair to characterise this as a fairly major inspection regime. It can be done in a number of hours, but you are not talking about a quick turnaround, like two hours, it’s like an overnight,” said an aviation source.

“It would be difficult to see how this would not disrupt services, but only Singapore and Lufthansa can answer that question.”

The A380 engine troubles come as the global airline industry started recovering this year from the 2008 and 2009 economic downturn that drained travel demand and caused airlines to slash capacity and halt orders.

The aviation industry was also growing more confident as airlines in emerging markets stepped up to buy.

Qantas said on Thursday its six A380s would remain grounded for the time being and it was already complying with the new European directive, which would now have to be adhered to by other airlines.

Qantas also announced an updated schedule for its international network utilising its 250 aircraft. The airline said there would be minimal disruption to passengers, regardless of when its A380 re-entered service as a result.

Singapore not grounding A380S
Singapore Airlines said on Thursday it was in compliance with the safety directives but was not grounding the airliner.

“Where we need to, we will substitute A380 flights with a smaller aircraft in order to continue flying,” he said. “We are not planning flight cancellations.”

Singapore Airlines has 11 A380s in service. It said on Wednesday it would replace engines on three of its A380 planes after finding oil stains on them. — Reuters, AFP