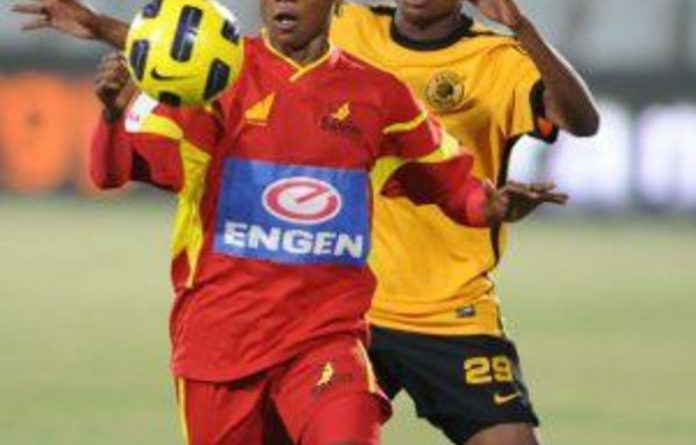 A shock 88th-minute goal from striker Sekou Camara saw Santos prevail 1-0 over Kaizer Chiefs in their Absa Premiership match at the Rand Stadium on Wednesday.

Santos grew stronger as the game neared the end and the much-fancied Chiefs left wondering how they lost a game they dominated for 75 minutes.

On an unusually cold and windy November night, the small crowd quickly grew tired of the Chiefs’ ineffective attack.

In the first half it was Chiefs who simply bullied the visiting Santos team.

Santos had nothing to offer on attack and had to defend a constant stream of Chiefs’ attacks.

After a shaky start to the game, the home team found their rhythm and pegged the visitors in their own half as they dominated territory and possession.

Chiefs were awarded a free kick 5m outside the Santos box, and Tshabalala’s powerful shot looked to have Santos keeper Tshepo Motsoeneng well beaten, only to strike the crossbar.

Chiefs midfielder Abia Nale wasted a good chance in the 17th minute when he latched onto a ball heading towards the Santos goal-line that drew Motsoeneng out, but the Santos keeper did well to block the cross.

Santos came out in the second half looking much better as they began threatening Chiefs’ defence for the first time in the game.

If Santos were eager, Chiefs were complacent. The home side produced flashes of good football, but they lacked creativity and desire in front of the goal.

Chiefs midfielder Renilwe Letsholonyane’s powerful shot from 25m out required a diving save from Motsoeneng in the 77th minute.

Santos should have scored the opening goal of the match when they surged forward and left the Chiefs defence trailing. As the cross came in, Santos midfielder Salmaan King was left with only the keeper to beat, but was unable to keep his shot on target.

Santos snatched the victory a few minutes later in the 88th minute when Camara headed the winner after Santos launched attack after attack.

Chiefs looked good for most of the game, but lacked a killer instinct in front of a goal and will be left regretting their missed chances.

Mboweni says no more funding for Zondo after the high...