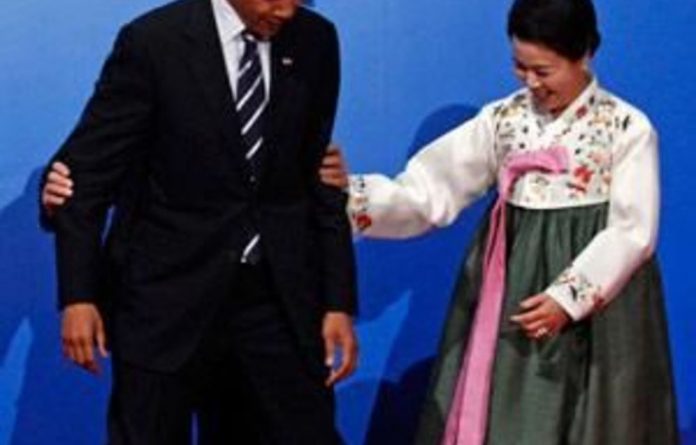 G20 leaders vowed on Friday to avoid currency manipulation and trade protectionism, but deep differences between China and the US prevented major progress in rebalancing the skewed global economy.

In a summit declaration, the leaders of the world’s biggest rich and emerging economies agreed to craft “indicative guidelines” to reorient trade between surplus and deficit nations.

Thanks to Chinese-led resistance to binding trade targets, that was far less ambitious than sought by the United States as the world’s richest power nurses a hangover from its worst recession since the 1930s.

US President Barack Obama renewed an offensive on the Chinese yuan, which critics say is kept deliberately cheap to support Chinese exporters at the expense of US jobs.

“It is undervalued and China spends enormous amounts of money intervening in the market to keep it undervalued,” Obama told a news conference, continuing a jobs-themed Asian tour after a mid-term electoral drubbing last week.

Obama, Chinese President Hu Jintao and the other G20 leaders warned that “risks remain” to the global economy and said that “uncoordinated policy actions will only lead to worse outcomes for all”.

Their statement pledged to move “toward more market-determined exchange rate systems” and to refrain from “competitive devaluation of currencies”.

They renewed calls for the World Trade Organisation’s “Doha round” of talks to be concluded next year, and expressed commitment “to resisting all forms of trade protectionism”.

The statement was only achieved after late-night negotiating sessions all week in Seoul, and risks being seen by financial markets as toothless, shorn of US proposals to limit trade surpluses and deficits to a specific level.

China, backed by other export titans such as Germany, launched a furious counter-offensive that intensified last week when the Federal Reserve instituted a $600-billion attempt to reflate the US economy.

They argued that the Fed’s “quantitative easing” policy was a back-door way for the US to depress the dollar and trade its way back to prosperity, at the expense of export-reliant countries around the world.

They told their finance ministers to write the non-binding guidelines “and pursue the full range of policies conducive to reducing excessive imbalances and maintaining current account imbalances at sustainable levels”.

Hu had presented his own counter-proposals in Seoul, calling on the US to adopt “responsible policies” and maintain a stable dollar.

The Chinese leader, who presides over the world’s second-largest economy and its largest exporter, demanded global resistance to trade barriers as he painted a bleak picture of the economic outlook.

“The international financial markets are volatile, the fluctuation in the major currencies is large, prices of commodities are high, and there is a clear rise in protectionism,” he said.

Accentuating the positive, South Korean President Lee Myung-Bak said the G20 had stared down critics who feared the world was headed for a “currency war” as countries jostle for trade advantage.

“We are now out of a so-called currency war,” said the G20 host, whose government had basked in the summit as an opportunity to showcase its economic transformation — and laid on a 50 000-strong security force to keep the peace.

Divisions in plain view
But divisions in Seoul were in plain view with China’s growing assertiveness in a variety of international forums, including the failed Copenhagen climate summit at the end of last year, again on display, delegates said.

British Prime Minister David Cameron said the agreement to work towards “indicative guidelines” on trade distortions was a small but necessary advance.

“This was never going to be solved overnight but the key thing is this — it is being discussed in a proper multilateral way without resort to tit-for-tat measures and selfish policies,” he said.

But Marco Annunziata, chief economist with the UniCredit Group in London, said the G20 had flunked its test after acting decisively to ward off a global panic in late 2008.

In the long run, “the worst the G20 could have done is to just diplomatically paper over conflicts and tensions that keep brewing more and more dangerously”, he told AFP. — AFP