G20 leaders near agreement, if not progress 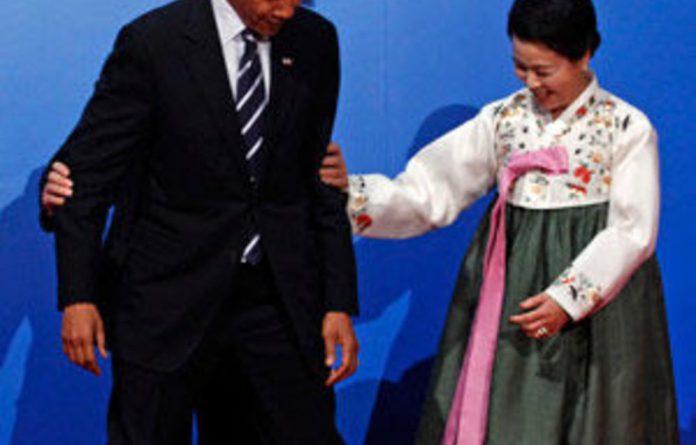 G20 leaders will agree to set vague “indicative guidelines” measuring economic imbalances at Friday’s summit but leave details to be hammered out in 2011, effectively calling a timeout after heated debate over currencies.

Negotiators laboured until the wee hours of the morning to thrash out an agreement their leaders could all endorse, despite deep divisions that were on public display in the run-up to the Group of 20 summit concluding later in the day.

G20 sources said the final statement was not expected to venture much beyond what was already agreed at a finance ministers’ meeting last month, but will call on the International Monetary Fund to develop a range of indicators to identify when global imbalances pose a threat to economic stability.

Finance ministers will consider the findings at a meeting in early 2011, according to a draft statement obtained by Reuters.

An earlier version of the document showed negotiators debating over whether those indicators ought to be “measurable” or “quantitative and qualitative”. In the end, neither phrase was included, suggesting the G20 failed to agree on the wording.

The G20 has fragmented as a synchronised global recession gives way to a multispeed recovery. Slow-growing advanced economies have kept interest rates at record lows to try to kickstart growth, while big emerging markets have come roaring back so fast that many are worried about overheating.

G20 leaders had high hopes for the Seoul summit, billing it as a chance to move toward “Shared Growth Beyond Crisis”. But tempers have flared over the US Federal Reserve’s latest bond-buying programme aimed at strengthening a shaky recovery, and Ireland’s worsening debt troubles served as a reminder that the financial system is far from fully healed.

A German government spokesman said finance ministers from Germany, Britain and France discussed the Irish debt situation, and will probably make a statement about it later on Friday.

Empty words’
US President Barack Obama and Treasury Secretary Timothy Geithner found themselves repeatedly defending the Fed’s easy-money policy at the summit, pointing out that a healthy US economy was essential to global growth.

They sought to refocus G20 attention on building a more stable world economy, less vulnerable to the boom-and-bust cycles that have marred the past two decades.

Central to that effort is smoothing out imbalances between cash-rich exporters such as China, which has amassed more than $2-trillion in reserves, and debt-burdened importers.

Although the United States drew the loudest criticism, China’s yuan policy remained a hot-button issue. Beijing allowed the yuan to rise this week, following a pattern of modest appreciation around big international events.

The US administration official struck a conciliatory note on Friday, saying China was trying to take steps to address US concerns about global economic imbalances.

“I think that if you look past some of the heat you’ve seen recently and you look at what’s happening in our very important relationship with China, I’m very encouraged by the progress we’ve seen,” he said.

Donald Straszheim, senior managing director at China Research ISI Group in Los Angeles, said he saw “no chance” that this summit could come up with any real substantive decisions on currencies or imbalances because no sovereign nation would take domestic policy instructions from abroad.

“China I think would be willing to sign on to the empty words of a standard communiqué — no to protectionism, yes to exchange rate reform, no to competitive devaluations,” he said. “This is easy but does not get one very far.”

However, Chinese President Hu Jintao, in thinly veiled criticism of Washington, called in a speech to the summit for countries that issue reserve currencies to adopt responsible policies and maintain relatively stable exchange rates.

Despite the acrimony, G20 leaders were eager to show they remained united and capable of cooperating to build a more stable global economy.

Dimitri Soudas, chief spokesperson for Canadian Prime Minister Stephen Harper, said when leaders sit down together they invariably make progress and Seoul should be no different.

“It was concerted action by the G20 that averted economic catastrophe and this obviously needs to continue, especially in this context of weakened and uncertain growth prospects,” he said.

Trump and Kim raise summit hopes after days of brinkmanship