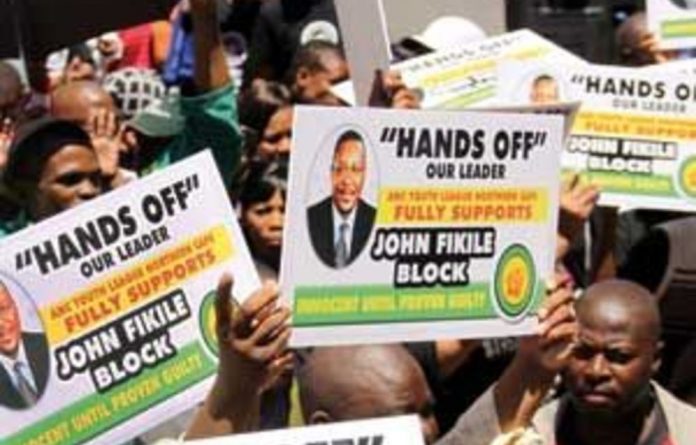 Block’s arrest last week on charges of corruption has set the cat among the political pigeons. His supporters claim he is the victim of a political conspiracy, but in an interview with the Mail & Guardian Gxoyiya dismissed this. “We won’t dwell much on the political conspiracy theory,” he said, although “it is a cause for concern to us that Block is still the finance minister”.

Gxoyiya said that, while Block was innocent until proved guilty, the image of the party and the government was a concern. “There is the public image to look after — that is the challenge we are sitting with,” he said.

“It is going to be difficult to explain to voters. [It would be] better for the image of government if the comrade steps down,” he said.

Cosatu insiders fear that Block’s arrest will allow the Democratic Alliance (DA) and the Congress of the People (Cope) to make gains in the Northern Cape.

But Zamani Saul, the ANC’s provincial secretary, said Block’s trial, due to start again in March next year, would not have any effect on the voters.

Block’s supporters said he was a “soft target” for Menzi Simelane, the National Prosecuting Authority (NPA) boss, who wanted to “polish his curriculum vitae”.

“Menzi wants to redeem himself. He has a battered ego because he knows there were a number of reservations about his appointment as national director of public prosecutions,” said Saul.
He said that the NPA had initially indicated that the state would not oppose bail, which would be set at R20 000, “but when we got into the court Menzi arrived and suddenly they opposed bail”.

Block’s apparently close relations with Fikile Mbalula, the sports minister, and Julius Malema, the ANC Youth League president, is said to be making supporters of President Jacob Zuma nervous because they fear that Block, who supported Zuma during the 2007 ANC elective conference, might not be counted on to support him for a second term.

“It looks like the ANC is making a turnaround about this guy that suggests he is an albatross for 2011 and 2012. There is a clear directive to act on this chap,” an alliance leader who supports Zuma said.

“But, although some provincial leaders indicated to [ANC secretary general] Gwede [Mantashe] that the Northern Cape will support Zuma, Block is attending Julius’s parties and supporting Fikile behind the scenes,” the leader said.

Some see Block as the first high-level casualty of the government’s clampdown on corruption, but the state’s opposition to granting him bail raised eyebrows.

“John is a sitting duck”, the alliance leader said. “They think they can donate him to show their fight against corruption.

“He is a strong person in the Northern Cape but in the context of national politics he is not that important. Block was too obvious in the way he was doing things so, while other people in similar positions have proxies, he was not very sophisticated in his dealings, making it easier to nail him.”

Block was found guilty last year of involvement in obtaining a fraudulent mining licence but is appealing the judgment.

An associate of his said Block and Mbalula remained close because Block served under Mbalula as a member of the youth league national executive committee.

But he insisted that Block’s arrest had nothing to do with the ANC elective conference scheduled for 2012. “John has always been someone who focused on the province,” he said. “Look at what happened to the Western Cape. We have learned that, if you focus too much on national politics, you lose the province.”

Some in the ANC say John Block is being protected for factional reasons, while those close to Pule Mabe say his image is being purposely tarnished.
Read more
National

A forensic auditor has faced Northern Cape ANC chairperson John Block's defence in a fraud and corruption case at the high court in Kimberley.
Read more
Advertising
Continue to the category
Politics