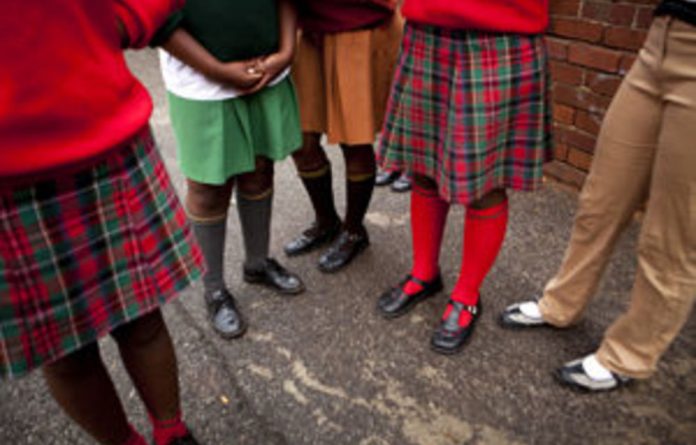 South Africans were outraged to hear that a grade eight learner was allegedly drugged and gang raped while her classmates stood around and filmed it on their cellphones — and that the police delayed the arrest of the boys because they didn’t want to disrupt their exams. But gender-based violence is endemic to South African schools and has been for many years.

In 2001 Human Rights Watch (HRW) released, “Scared at school”, an extensive report that examined sexual violence committed against girls in South African schools. It found that many were subjected to some form of violence — rape, abuse, harassment and assault — and that this was “an inevitable part of the school environment”.

The report also cited a study in the Gauteng area which found that eight in 10 young men believed women were responsible for causing sexual violence and three in 10 thought women who were raped had “asked for it”.

This kind of thinking about victims of sexual violence also occurs among girls and women, according to two female grade eight learners at the Jules High School, where the alleged gang rape took place.

“We think it’s her fault,” they said of the alleged victim. “She was drunk.”

Two grade 10 boys at the school were more concerned about the damage being done to the school’s name than whether the girl had been raped or not.

“I think she was enjoying herself, the way she was acting,” said one.

They were both there when the incident took place.

Many reports have been written on the subject since ‘Scared at school” was published, but the situation today remains much the same as in 2001, according to a group of researchers who presented a paper on gender and violence in South African schools at the United Nations Girls’ Education Initiative (UNGEI) conference on education and equality in May this year.

“The climate is far less hopeful than one would imagine would be the case after a decade of dedicated scholarship and advocacy,” the researchers wrote.

But the lack of a comprehensive national survey on gender-based violence in schools meant it was impossible to say exactly how widespread the problem was.

“It seems that we’re just lurching from crisis to crisis,” Lisa Vetten, the director of Tshwaranang Legal Advocacy Centre, said. “Something like this happens, everyone runs around shouting, then we forget about it. This case is an example of a much bigger problem.”

Joan van Niekerk, the manager of training and advocacy for Childline South Africa, agreed, saying it was an “enormous problem”. She cited a recent report by the Human Sciences Research Council which revealed that 34% of learners experienced sexual harassment and sexual abuse at school from peers and another 14% were sexually harassed by educators.

“These are amazingly concerning statistics, but what is even more surprising is that this research has not resulted in a national think-tank with education departments to plan and implement a strategy,” Van Niekerk said.

South Africa has one of the most progressive and liberal constitutions in the world, largely due to the Bill of Rights and its promotion of the equality of all citizens. But the practice is often far removed from the theory.

“South Africa is full of contradictions and one of these is the gap between the progressive legislation put in place to protect women and girls and the reality of the daily experience of violence and harassment of many women,” wrote the researchers at the UNGEI conference.

Behind the gender-parity policies, schoolgirls were still negatively affected by discrimination, they wrote. This could be attributed to, among other things, long-held patriarchal attitudes, the violent legacy of apartheid, social attitudes to women and girls, and a lack of education about equality and human rights.

While girls in South Africa had better access to schools than those in other African countries, that was often denied to them as a result of the gender-based violence many experienced at schools on a daily basis, the researchers said.

Sakkie Prinsloo, a senior lecturer in the department of educational management and policy studies at the University of Pretoria, described it in his 2006 paper on sexual harassment and violence in South African schools as “an invisible form of exclusion”.

The HRW report found that violence had a disruptive effect on the girls’ schooling and that some girls left school altogether. Those who remained chose to “suffer in silence”.

Yet the rights to human dignity, equality, freedom and a safe environment are enshrined in the Bill of Rights.

“We have a wonderful Constitution and one of the best bills of rights in the world,” Prinsloo said. “But, while it’s wonderful on paper, I think that everyone should make it part of their lives and live what it says. Every school has two very important constitutional duties — to provide a quality education and to ensure a safe school environment.”

Many researchers felt that the violence in schools would not change until the issue of violence in the broader society was dealt with.

“The biggest gains in addressing gender-based violence in and around schools will be made only when the political will is in place to address deep-seated gender prejudices in all aspects of South African life,” the UNGEI paper read. “We will not be able to change schools unless we transform our wider society.”

But something must be done to stop sexual violence, whether it is incidents like the one at Jules High School, educators demanding sexual favours for marks, or male learners groping girls in classrooms. As Vetten says: “What is important is that we must learn from the [Jules] case, and implement a considered strategy. This is happening all the time. Have we learned nothing from the last time?”

February 8 2010: A seven-year-old girl was repeatedly raped in the school toilets by three boys (one aged nine and two aged 11) who attended the same school.
February 19 2010: A girl in grade 11 at Bryanston High School in Jo’burg accused a fellow pupil of raping her. He allegedly coerced her into the toilet while she was waiting for a school play to start. He was suspended for seven days.
May 25 2010: A 14-year-old girl was raped, allegedly by her school friends, in Uitenhage in the Eastern Cape. She had bunked school with friends who later offered to escort her home. Police noticed the group behaving suspiciously in nearby bushes in the area and soon found the girl lying unconscious. Two boys, aged 15 and 18, were charged with rape. The pupils were under the influence of alcohol at the time.
June 9 2010: A boy from Mondeor and a girl from John Adamson High were at a house with friends, where they drank alcohol. The two had sex in the toilet of the house, which was recorded on a cell phone. After the school holidays, the girl discovered that the video had been widely circulated and laid a charge of rape against the boy. This week the Sexual Offences Court decided not to prosecute.
August 4 2010: Two 12-year-old boys were accused of continually raping at least three girls at the Pugishe Primary near Bushbuckridge. Parents said the sexual conduct had been happening since April this year. The rapes came to light when one boy asked another to assist him with “manpower because his wives were becoming many by the day”. Parents accused the school of trying to sweep the scandal under the carpet.
November 8 2010: An 11-year-old girl from Katlehong was allegedly raped by a 48-year-old school caretaker at her primary school on several occasions. He would give the girl sweets and chocolates after raping her. A school teacher discovered what had happened and reported the incident. The caretaker was arrested.
Sources: The Herald, West Cape News, The Sandton Chronicle, The Witness, News24, The Star and The Sowetan

In his budget speech at the beginning of the year Pravin Gordhan, the finance minister, announced that education would be the government’s top priority. It was allocated a whopping R165-billion, or 17% of the total budget.

Jules High School in Johannesburg’s Jeppestown is bordered by three streets. The entrance, apart from the graffiti on the walls (it is a high school after all), is not unattractive — oak trees fill the sky with their leaves.

But around the corner it’s a different story. Rubbish fills the street where the taxis wait to collect pupils. Broken, dirty window panes are visible from the road. The walls are grimy.

Teenagers loiter on corners, the boys checking out the girls, the girls exchanging gossip. Some lie down on the tarmac, playing chicken with passing cars.

The South African government is the seventh-largest spender on education on the continent but the country performed abysmally in the Trends in International Mathematics and Science study, ranking bottom in 1999 and 2003. In its first World’s Best Countries report, Newsweek rated South Africa’s education system 97th out of 100 countries.

So, with all that money being poured into education, where is it going? It doesn’t look as if much of it makes it to Jules.