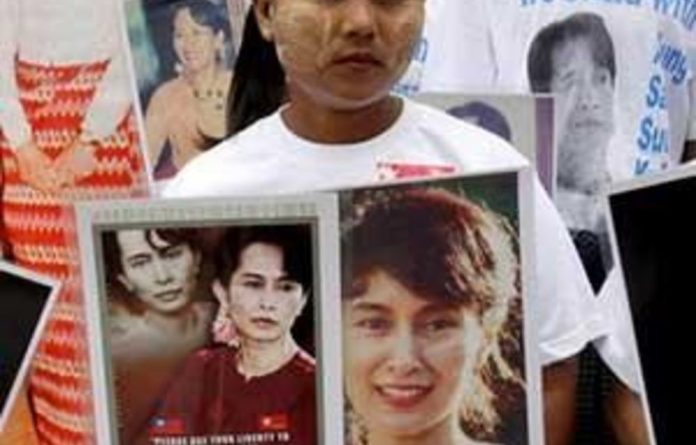 Detained Nobel Peace Prize laureate Aung San Suu Kyi was due to be freed from house arrest on Saturday, but there was still no sign the country’s army rulers were ready to release her.

The charismatic leader of Burma’s fight against military dictatorship remained in her crumbling lakeside home, despite rumours paramount leader Senior General Than Shwe had approved an order to free his arch enemy from seven years of house arrest.

Media reports, blogs and web boards went into a frenzy of speculation on Friday as unidentified government officials and army insiders spoke of her imminent release, but in one of the world’s most secretive countries, no one knew for sure.

There were doubts in Rangoon early on Saturday over whether an order to release her had been signed. Some questioned whether her party circulated rumours of the order to draw crowds and pressure the military junta to free her.

“Nothing has happened so far, but her house arrest expires today, so we think she will be released today,” Nyan Win, a lawyer for Suu Kyi, told Reuters.

Analysts said it was likely only Than Shwe and his closest allies knew the real fate of Suu Kyi, who has spent 15 of the past 21 years locked up because of her opposition to nearly half a century of military rule in the former Burma.

With the November 7 election, the first in 20 years, out of the way and won by a army-backed party, the generals could seek some international legitimacy by freeing Suu Kyi, daughter of the hero of Burma’s campaign for independence from Britain.

Such a move would be the first step towards a review of Western sanctions on the resource-rich country, labelled by rights groups as one of the world’s most corrupt and oppressive.

Breathing space
Freeing the 65-year-old pro-democracy leader could also divert some attention from an election widely dismissed as a sham to cement military power under a facade of democracy.

“The regime needs to create some breathing space urgently,” said a retired Burmese academic, who asked not to be identified.

“They may do that by releasing her and might think it will help improve an image tarnished by electoral fraud.”

But pessimists question whether the generals really care about their image when they are assured of diplomatic and economic support from their neighbours, in particular, China.

Releasing Suu Kyi, who has backed moves to isolate the regime, carries risks for the military as it seeks legitimacy for the election and for a new government that will be set up.

Suu Kyi is still believed to have the same mesmerising influence over the public that helped her National League for Democracy win the last election in 1990 in a landslide, a result the military ignored.

She could draw big crowds to the gates of her home in Rangoon and with a few words could rob the election of any shred of legitimacy it might have, possibly seeking to have the results annulled on grounds of fraud.

Many experts say the sanctions also benefit the junta, allowing generals and their cronies to dominate industry in the country of 50-million, rich with natural gas, timber and minerals with a strategic port in the Bay of Bengal

Trade with the West has been replaced by strengthening ties with China, Thailand and Singapore, whose objections to the regime’s human rights record are relatively muted.

“There are a lot of people with a lot at stake in maintaining the status quo,” said Sean Turnell, an expert on Burma’s economy at Sydney’s Macquarie University.

It would not be difficult for the generals to find a reason to extend her detention beyond Saturday, when a sentence imposed last year for the violation of a security law is due to end.

Her NLD party has been officially disbanded by the government after deciding not to contest the election. Her opposition to the poll could provide a pretext to detain her further.

They could also impose restrictions on her freedom that she would not accept.

Suu Kyi was just a few weeks away from being released last year when an unexpected visit by an American intruder, John Yettaw, robbed her of her freedom.

She was found guilty of harbouring Yettaw for two days, which breached a 1970s law protecting the state against “subversive elements”, a verdict critics said was intended to sideline her from the election. – Reuters