Braamfontein: from dumpster to state of the art 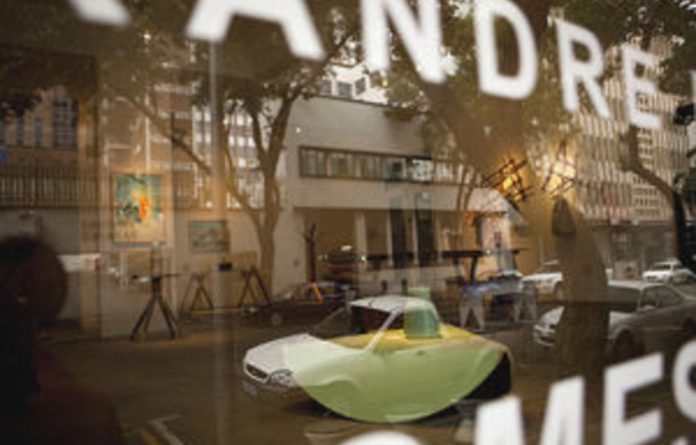 When the Co-op gallery opened more than a year ago, it was the only creative space on Braamfontein’s Juta Street.

In its vicinity, there was a car dealership, high-rise buildings housing students, a “hotel” that still charged hourly rates and the offices of a waste-collection company.

Fast forward to November 2010 and Juta Street has become the city’s newest and most vibrant creative district.

The galleries Brodie/Stevenson and Afronova have moved to Braamfontein; the old army surplus shop on the corner of De Beer and Juta has morphed into 70 Juta Street, a swanky creative space containing a coffee shop, a florist, an architectural practice, an interior-design studio and a film and camera company.

The mall, which has officially been opened, completes Juta Street’s metamorphosis; that and the news that the French Institute of South Africa, fashionista David Tlale, visual artists Wayne Barker and Johannes Phokela and iconic pianist Abdullah Ibrahim are to move into the area to establish their studios and offices.

Brodie/Stevenson has moved from, in the words of David Brodie, a –“peculiar part of Jan Smuts Avenue” to crouch at the foot of the Nelson Mandela bridge.

On the other side
The gallery Afronova, owned by Frenchman Henri Vergon, has also moved from Newtown to De Beer, an adjoining street. On the other side of Bertha Street — the road that leads to the Nelson Mandela bridge — graffiti artist Rasty and his partners Curio and Angel have moved to a bigger space, next to his former shop.

The Wits Gallery, to be housed on the corner of Bertha and Jorissen streets, is slowly taking shape, and will be opened next September or October, a development that Brodie describes as the “single most important event”.

Brodie is looking forward to a “dynamic exchange between himself, his artists and the Wits Gallery”. The Mail & Guardian spoke to Brodie on a Thursday mid-morning, a few hours before the opening of photographer Pieter Hugo’s exhibition Permanent Error. The decision to be in Braamfontein — “the most exciting part of Jo’burg at the moment” — was motivated by the “idea to relocate to a part of the city with lots of energy”.

Most of this energy exudes from the students who attend Wits University, Rosebank College and other tertiary institutions in the area.

“You sit here [in the gallery] and look at the bridge, an important marker of the relationship of the city with the northern suburbs,” Brodie says.

Connecting bridge
The naming of the bridge after the country’s favourite citizen is, of course, an attempt to connect the north and the south. The bridge connects the multitudes who live in the south and earn their bread in the north and the northerners who work in Jo’burg’s CBD.

Even though Juta Street sits in the shadow of the famous bridge, it has nothing of the saint’s halo. In fact, the offices of Pikitup, the city’s waste management company, are on Juta; that seemed to be ominous.

For some time, this particular street has been the proverbial dumpsite of Braamfontein. It was safe only during the day. As nightfall descended, so did an air of menace. The signs that Braamfontein could one day sprout into life have always been there; indeed, when the Alexander Theatre was reopened a few years ago, most people thought it was the moment.

A few productions later, it soon became apparent that Braamfontein, which already has the Joburg Civic Theatre and Wits Theatre complexes, wasn’t quite ready to have three theatre venues.

Months later, the top-end restaurant Narina Trogon on De Korte Street was opened, bringing suburbanites who wanted to eat out in a place that felt a bit like town, but without the city’s attendant terrors. Further down the street, Rand Lords, a high-end rooftop bar, hosts functions and parties for the city’s high-flyers.

Much of this renewal (or gentrification) of Braamfontein has been spear-headed by Southpoint, the property developer that owns and runs many apartment buildings in the area (as well as Rand Lords). The ingredients of a street life were always there, to be sure, thanks to the teeming student population. Braamfontein has boasted a pavement culture that is perhaps without parallel in the whole of Jo’burg.

Although pockets of street life exist elsewhere in the city, for instance on 7th street in Melville or at Arts on Main in Jo’burg’s inner city, there’s something not quite organic about a lot of it. Go to Arts on Main on, say, a Monday afternoon, and the only people you will see are the security guards.

Braamfontein is different; its life is lived on the streets: barber shops, newspaper kiosks, hotels, flats, fast- food restaurants, spaza shops and internet cafes are evidence of the people who call it home. Perhaps the Paris-born Vergon finds the Braamfontein vibe oddly familiar; Parisians, he says, “like to live on the street”.

Moving to Braamfontein
His decision to open his gallery in Braamfontein wasn’t motivated by monetary concerns. “If I was considering the business aspect, I would have gone to Parktown or Parkhurst,” he says.

It’s a decision that people questioned. Vergon says when some heard that he was moving to Braamfontein, “they thought it was a crazy decision”. But he and his fellow creatives are in Braamies to stay. His ethos reminds one of the proverb, “a man does not plant a tree for himself; he plants it for posterity”. So, Vergon and his fellow folk recently planted trees.

“We planted trees last week and one day they will be big,” he says, while showing off his gallery to visitors. “We have a chance to make an impact on the city, to make it enjoyable.”

Braamfontein has something endearing about it, something safe in its make-up. “Braamfontein isn’t scary for a lot of people,” Vergon says. It could be the stability that is gestured by Civic Hill, Constitution Hill beside it and Wits University down the road.

In spite of the shelter of being close to Constitution Hill, that bastion of South Africa’s democracy, Braamfontein is still part of the CBD and so fragments of fear still exist, which is why there are some who believe that people like Vergon “are idealists”. Vergon dismisses the idea, saying instead, it’s because “we are free”.

One of the first creative people to set up base in Braamfontein was Rasty, the graffiti artist. In the three years he has been around “much has happened”, he says. He and his business partners started with a shop that sold spray cans for creating graffiti and other paraphernalia, but now have a gallery space where graffiti and tattoo artists showcase their works.

“We want to be known as the place where cool is happening,” he says of a space that hosts monthly exhibitions by the denizens most in touch with street culture. “We have the kind of work you wouldn’t see in any other gallery space.

Everything we do has its foundations in street culture,” Rasty says. He’s wary of the sudden interest in Braamfontein and its possible consequences: “When we moved in, it was because it was a central spot, cheaply priced. Suddenly, it’s a cool space to be. We hope the renewed interest won’t squeeze out the young people,” Rasty says.

When renewal happens, squeezing out follows, but for now Braamfontein is just basking in the spotlight.