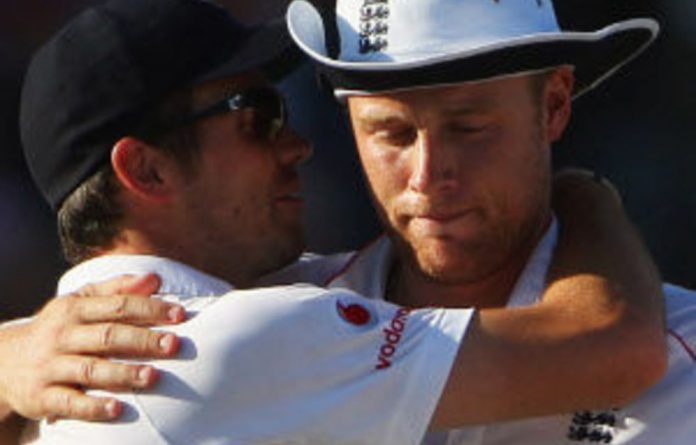 Ian Bell made a century and Alastair Cook and Paul Collingwood half centuries as England continued its impressive Ashes build-up on day two of its tour match against Australia A.

Bell was 121 not out and Collingwood 74 at stumps on a rain-affected day as England moved to 335-5 in reply to Australia A’s first innings of 230.

Bell’s century came from only 113 balls and he had hit 16 fours and a six while Collingwood, with whom he formed an unbroken 198-run partnership, had faced 128 balls. Cook scored 60 from 70 balls with seven fours.

Bell, Collingwood and Cook continued the strong form of England’s top order batsmen ahead of the first test against Australia starting at Brisbane on November 25. Captain Andrew Strauss has two centuries on the tour already, while Cook had played himself into form with a century and a 50 in his past two innings.

Strauss made 10 in this innings, while Kevin Pietersen was bowled for 5 but Jonathan Trott made a solid 41 in an 87-run third wicket stand with Cook.

The match, which was affected by rain in its first and last seasons on Wednesday, is due to continue until Saturday.

The fast bowler and free-swinging lower-order batsman, regarded as the central figure in Australia’s Ashes attack, batted with ease and aggression, hitting his 121 runs from 143 balls with 18 fours and a six. He then took 1-18 from seven overs.

Otherwise, it was not a day to boost confidence in Australia’s Ashes prospects. None of Australia’s batsmen, named in an expanded 17-man squad for the first Test, took the opportunity on Wednesday to bat themselves into the test side.

Captain Ricky Ponting ground out a dogged 27 from 53 balls for Tasmania against New South Wales while Shane Watson had scores of 6 and 15 and Simon Katich made one and 36 in the same match.

Mike Hussey made an 18-ball duck in the Western Australian innings in which Johnson starred. The failure increases pressure on Hussey to hold his place in Australia’s middle order. Marcus North made 17 from 51 balls for Western Australia.

Vulnerable Australia
Former test fast bowler Damien Fleming said a failure by selectors to make hard calls after the 2009 Ashes series loss to England had led to Australia’s decline as a test power.

“We lost the Ashes in 2009, no one got dropped, nothing there. I could’ve lived with Mike Hussey being dropped there,” Fleming said.

“From that Ashes defeat it was a chance to get some young players in with leadership potential so when Ricky Ponting does move on or gets tapped on the shoulder, we have actual options. We’ve got ourselves into a position where there’s no option besides Michael Clarke, and we’re in a very vulnerable position with batsmen at five and six.”

Clarke is not playing in the current round of Sheffield Shield matches because of a back injury.

Fleming suggested England’s loss to India in a two-test series in India last month had further damaged the selectors’ confidence.

“I reckon the team they picked for that first test in India was the team they wanted for the Ashes, and what’s hurt them is the form of certain players,” he said. 0- AP

How the Ashes got its name
Mention the word “Ashes” to any cricket fan and they know you are talking about a Test contest between England and Australia.

But cricket’s oldest rivals had been playing each other for five years before the idea of the Ashes was born.

It happened in 1882 when, in a one-off Test at The Oval, Australia, inspired by figures of 14 for 90 from Fred Spofforth, “The Demon”, who fought back to win a thrilling match by seven runs.

The Sporting Times reacted to Australia’s first win on English soil with a mock obituary written by Reginald Shirley Brooks.

It read: “In affectionate remembrance of English cricket which died at The Oval, 29th August 1882. Deeply lamented by a large circle of sorrowing friends and acquaintances. R.I.P. N.B. The body will be cremated and the Ashes taken to Australia.”

Ivo Bligh, later Lord Darnley, captained England to a 2-1 victory in the subsequent series in Australia and, according to many cricket histories, he was presented with an urn containing the Ashes of a bail used in the third Test by a group of Melbourne women.

However, it was subsequently suggested that the Ashes were those of a ball and in 1998 Lord Darnley’s daughter-in-law said they were the remains of her mother-in-law’s veil.

The urn itself was bequeathed to Lord’s owners Marylebone Cricket Club (MCC) on Darnley’s death in 1927 and became an exhibit in the ground’s museum.

Regardless of the result of the Ashes, the urn — which stands just four inches high — has remained at Lord’s.

The justification has been that the ashes were a private gift to MCC and not a sporting trophy.

But in order to remedy this perceived unfairness the MCC commissioned an Ashes-shaped crystal trophy which was first presented to Australia captain Mark Taylor after the 1998/99 series.

England currently hold the Ashes following their upset 2-1 win at home in 2009 which erased the nightmare of a 5-0 whitewash in Australia two years earlier.

The urn has only been to Australia on a couple of occasions, the first in 1988 for the country’s bicentennial celebrations.

The MCC had hoped the urn could return to Australia in 2003 but an X-ray taken at the time revealed several serious cracks, notably in the stem.

But, following repair work, it was taken on a tour of Australia to coincide with the 2006/07 series.

Six great Ashes moments
The Ashes have produced many notable moments since their inception more than a century ago.

1948: Bradman out for nought
The greatest batsman cricket has known, Australian hero Don Bradman had rewritten the record books during the 1930s with remorseless efficiency and came to his final Test innings before retirement needing just four runs for a career average of 100. But instead he was bowled for a second-ball nought by leg-spinner Eric Hollies.

No one though, before or since, has come close to Bradman’s mark of 99.94

1956: Laker’s 19 wickets.
Jim Laker’s haul of 19 wickets for 90 runs in the fourth Test against Australia at Old Trafford has never been bettered by any other bowler in the history of Test cricket.

Many Australians who were there remain convinced for ever more that the pitch had been “doctored” to assist Laker’s off-spin.

But even if the conditions were in his favour, Laker’s feat — which saw him take all 10 Australian wickets in the second innings — was remarkable.

It was made all the more so by the fact his Surrey colleague and left-arm spinner Tony Lock, who took the only other wicket to fall, was all the time trying to get batsmen out from the other end.

1972: Massie’s Match
Western Australia swing bowler Bob Massie’s haul of 16 for 137 would have been astounding at any time. That he took so many wickets on his Test debut, and at Lord’s, “the home of cricket”, to boot, made it almost the stuff of schoolboy dreams.

A succession of England’s best batsmen were left utterly bewildered by Massie’s late swing, whether from over or around the wicket.

Unsurprisingly the game was dubbed Massie’s Match, but sadly for the bowler himself he fell as fast as he rose and played just five more Tests.

1977: Boycott’s 100th first-class 100
Contrary and awkward and beloved by thousands of his fellow Yorkshiremen who saw in him the player they themselves might have become if only they had his dedication, Geoffrey Boycott was one of England’s best opening batsmen.

But he went into self-imposed exile from Test cricket in 1974, unable to stand being overlooked for the England captaincy in favour of Mike Denness.

However, he eventually returned to England duty in 1977 and at his Headingley home ground, in front of his adoring fans, scored his 100th first-class hundred when a textbook on-drive off Greg Chappell went for four.

1981: Botham’s five for one
So immense was England all-rounder Ian Botham’s impact on this series it became known as Botham’s Ashes.

His innings of 149 not out at Headingley and 118 at Old Trafford were both, in their different ways, thrilling efforts.

But in between those two centuries, Botham produced a stunning bowling display in the fourth Test at Edgbaston.

Australia, set just 151 for victory, were in command before swing bowler Botham took five wickets for just one run in 28 balls to seal an astounding 29-run win.

1993: Warne’s ball of the century
Rarely can one delivery have resonated for so long as Shane Warne’s first ball in Ashes cricket.

Mike Gatting, one of England’s better players of spin, was at the crease when Warne produced a spitefully sharply dipping and turning leg-break which pitched outside leg-stump and clipped the off-bail.

Warne was on his way to becoming one of the all-time greats and England in particular were in thrall to the Victorian.

2005: Flintoff’s sportsmanship
While the rest of the England team euphorically celebrated a nailbiting two-run win at Edgbaston that saw them level an Ashes series they’d eventually win 2-1, Flintoff took time out to drop down to his haunches and offer some consoling words to not-out batsman Brett Lee, who’d so nearly won the match for the Aussies.

It was proof that the spirit of cricket was more than just a trite phrase and the gesture made Flintoff a national hero in two nations. — Sapa-AP, AFP