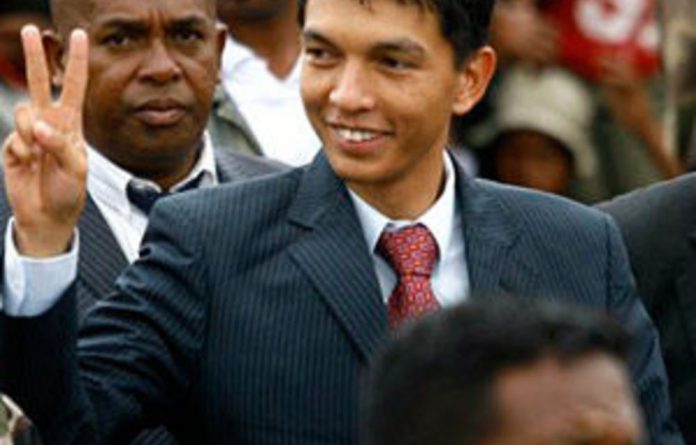 A small group of rebel soldiers who threatened to topple Madagascar’s government were holed up in their barracks on Thursday as the Indian Ocean island awaited the next move in the latest coup plot.

President Andry Rajoelina, who drove former leader Marc Ravalomanana into exile in March 2009 and held a referendum on Wednesday to legitimise his rule, has dismissed the rebels as an irrelevant minority and military leaders have backed him.

There was calm across the city of faded French colonial grandeur and the international airport, which the rebels had threatened to seize on Thursday, was running normally with no security forces visible.

Political pressure on Rajoelina increased however, with former president Albert Zafy, who was at the centre of failed efforts to broker a power-sharing deal between Rajoelina and Ravalomanana, saying Rajoelina should quit.

“We support the action of the rebel officers. Andry Rajoelina and [prime minister] Camille Vital should resign and not cling on to power,” Zafy told Reuters.

“If there are officers who say things are bad, it is because corruption, bad governance and a lack of respect for the people are proven,” Zafy said.

The group of about 20 officers said on Wednesday they had set up a military council to run the Indian Ocean island.

‘Thanks to God that I’m still here’
Rajoelina, Africa’s youngest leader, appeared unruffled when he spoke to reporters late on Wednesday after the military top brass rallied behind the government and promised a swift crackdown on any mutiny.

“There was a letter threatening me with death if I didn’t resign. It is thanks to God that I’m still here,” he said.

It was not immediately clear whether the army chiefs backing the government would try to negotiate an exit for the dissidents, or use force to nip the rebellion in the bud.

The military has endured several rifts since the 2009 coup. One of the rebels, General Noel Rakotonandrasana, initially backed Rajoelina’s power grab and became armed forces minister. But he was sacked in April following rumours of a planned coup.

Referendum results trickle in
The political crisis has hammered the economy in the world’s fourth largest island, where foreign firms are developing its oil, nickel, cobalt and uranium deposits.

The price of nickel climbed 1,83% to $21 945 at 8.27am GMT extending gains after the tension in Madagascar helped push prices up 5% on Wednesday.

The island hosts Sherritt International’s Ambatovy project that is due to be completed by January 2011 and produce 60 000 tonnes of nickel a year once it hits full speed.

The unrest occurred the same day Madagascar voted peacefully on a new draft constitution that would lower the minimum age for a president to 35, allowing 36-year-old Rajoelina both to stay in office until elections slated for May 4 2011, and run again.

While analysts expected the referendum to pass, they said a low turnout would do little to help Rajoelina’s attempts to legitimise his power grab in the face of widespread international censure.

Results were expected to continue trickling in on Thursday from across the world’s fourth largest island.

The first provisional results late on Wednesday from a handful of polling stations in the region gave the “Yes” camp a commanding lead, but with turnout of just 33%.

Rajoelina swept to power on the back of protests against Ravalomanana’s increasingly autocratic rule. But his failure to deliver on populist pledges has eroded his popularity. – Reuters

Rajoelina and Ravalomanana have been locked in a fiercely personal duel for power, coming first and second in the preliminary election in November
Read more
Africa

Rajoelina has returned to power after he won 55.66% against 44.34% for Marc Ravalomanana in the run-off vote held last week
Read more
Africa