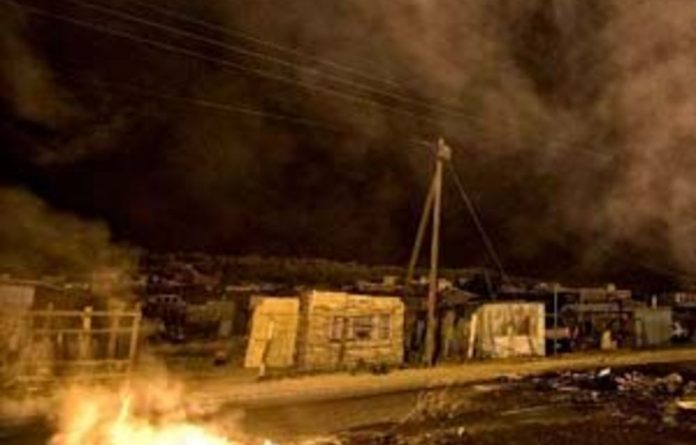 The African National Congress Youth League (ANCYL) has openly thrown its weight behind continuing service delivery protests in Khayelitsha township, which turned violent when vehicles were stoned and a City of Cape Town bus for the physically disabled was ­petrol-bombed.

While there was initial confusion about who was involved, Andile Lili, the treasurer of the ANCYL in the Dullah Omar region, said residents had invited the league to take part in the protests, which took to the streets last weekend.

The barricading of roads in Mew Way in the township’s TR section has disrupted traffic and there have been growing reports of stone-throwing and torching of vehicles.

The ANCYL has come under fire for piggybacking on the protests to weaken the Democratic Alliance’s hold on the Western Cape.

The violence follows last month’s five-day protest against living conditions in townships, including Khayelitsha, organised by social movement Abahlali baseMjondolo. But Msonke Poni, Abahlali’s regional chairperson, said he was concerned about the continuation of the protests and the fact that they were becoming violent.

But Lili insisted the league’s involvement was not part of the ANC’s campaign for next year’s municipal elections. “We haven’t even started campaigning. We’re leading the people because they have hope in us and we have the energy to fight for them,” he said. “People from formal and informal settlements are joining in because they’ve just had enough of the lack of service delivery and broken promises by the Western Cape government.”

Lili lashed out at Western Cape premier and DA leader Helen Zille, saying it was propaganda that she had been chosen World Mayor in 2008. She was selected because she was white, he said.

Lili insisted that the league did not approve of the violence, which arose from anger. A meeting this week would decide whether the protests would continue non-stop for 14 days, he said. In spite of Lili’s open admission of the ANCYL’s role, Luvuyo Hebe, the ANC chairperson in Khayelitsha’s ward 190, denied that the party was involved in organising the protests.

Residents had simply had enough of appalling living conditions, he said. Hebe said he was arrested last week after being wrongly accused of damaging the Khayelitsha community hall. “There was no case against me as I haven’t been involved in the protests,” he said.

However, he did say that the ANC supported the aims of the protest. “The premier is not helping the African people,” he said.

Cape Town mayor Dan Plato agreed that parts of the township stood on sodden, low-lying areas that were not habitable, but he said residents had not heeded council advice to erect shacks on solid ground.

Plato said he had recently met top local leaders, including the Khayelitsha development forum and all ward councillors. “I was told these protests had nothing to do with service delivery, that it was about vigilantism, hooliganism and barbarianism,” he said.

“I was told the metro police and the South African Police Service were not doing enough about the violence.”

Plato said many ward councillors were “living in the shadow of death threats. A créche was closed by the protests the other day. And now a Dial-A-Ride bus for the physically disabled has been burned. How long can the police tolerate it when people throw stones and petrol bombs?”

The Western Cape minister of community safety, the DA’s Albert Fritz, said two people had been arrested on public violence charges and would appear in court shortly.

Service delivery protests on the Cape Flats are partly the result of an African National Congress (ANC) campaign aimed at giving the impression that the Democratic Alliance (DA) does not care about the poor, DA leader Helen Zille said on Friday.

Zille said service delivery in Khayelitsha, where council vehicles were set alight last week, was bedevilled by conflict within communities about “who should benefit, who should move to make way for installation of underground services, who should get to work on the project, etc”.

“But in the present situation there is an additional dimension,” she wrote in her weekly newsletter SA Today.

“Local government elections are due in about six months, and hundreds of local activists are competing with each other be the chosen candidate for their ward, or to secure a place on the list.”

‘Protest action is the ANC’s way of unseating the DA’
She said leading protest action had therefore become a way for would-be candidates to build a profile.

“In the ANC-dominated wards of Cape Town, there is yet another dimension at play because the ANC is determined to do whatever it takes to unseat the DA-led coalition in the city.

“Their agenda is to create the illusion of spontaneous community anger at lack of service delivery to reinforce the lie that the DA does not care about the poor.”

Zille conceded that service delivery in Khayelitsha is “by no means perfect”.

“But one thing is certain: there would be far more of it if it weren’t for service delivery protests,” she said.

“It is beyond irony that services are destroyed in the name of service delivery protests,” she said.