Red sails in the sunset 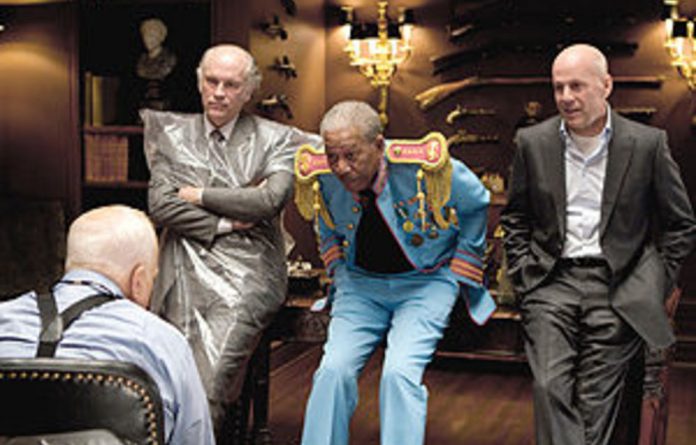 A month or two ago we had The Expendables, with a 63-year-old Sylvester Stallone doing action for oldies; this week we have Red, putting Bruce Willis (55) back into kick-ass action and adding some oldie action heroes in the form of John Malkovich (57), Morgan Freeman (73) and Helen Mirren (65).

These two swallows have spurred speculation about a new summer of Hollywood roles for ageing actors in action movies, where they can pretend to be as active and energetic as their rivals 30 years younger. But old is not new.

John Wayne hung on to his stardom as a gun-totin’ western hero until he was at death’s door. His last film, The Shootist (made in 1975 when he was 68), played on his great age and his declining health (he had cancer) to portray an old gunfighter on his last legs but still shooting straight.

More recently, Clint Eastwood’s magnificent Unforgiven (1992) dealt with both ageing warriorhood (he was 61) and the retrospective myth-making of the western narrative.

Men in Hollywood have long had more chances to age yet stay in movies than women. Cary Grant was 59 when he romanced a 34-year-old Audrey Hepburn in Charade (1963), but at least he retired soon after that. Others have not been so wise.

The idea of Dustin Hoffman, at 71, romancing Emma Thomson, 22 years his junior, in Last Chance Harvey, is mildly disturbing. But Sean Connery played James Bond for one last time at 53, and was smooching Catherine Zeta-Jones (then 30), never mind jumping off buildings, at age 69 in Entrapment.

We will have to wait and see whether those female stars doing action roles can rework them for their later years — perhaps in 25 years’ time we’ll have Angelina Jolie at age 60 redoing the karate kicks and cliffhanging stunts of Salt. I foresee Salt VI: The Final Battle, or perhaps Jodie Foster in Clarice Starling’s Last Case, due on our screens in about 2025.

The “final battle” or “last case” idea hovers around Red, perhaps in acknowledgement of its stars’ great age. It’s a bit like those crime-caper flicks in which the master criminal is persuaded out of retirement for one last great heist. At the same time, its final moments jokingly suggest fresh new adventures for its leads.

Willis plays a former CIA operative (“Red” apparently stands for “retired, extremely dangerous”) who, as is usual in non-crime films, is not so much persuaded as driven out of retirement.

If this were a more serious or at least non-comic film of the Bourne variety, someone close to him would have to be assassinated to chase him from his hidey-hole and back on to the shoot-out circuit, but Red is luckily more of a comedy than that.

So Willis’s character is hounded from retirement by a squad of killers unexpectedly sent to rub him out. He still has the almost superhuman skills he obviously developed during his long years of more formal employment, so he gets away — and now has to answer the questions of who’s trying to kill him and why.

These questions are the conceptual motor for the plot that follows. (By the way, we are informed later in the movie that the hit squad is made up of freelancing South Africans. Do I hear a chuckle?)

On the way, Willis naturally picks up a pulchritudinous younger woman (Mary-Louise Parker, a mere 49) who is now in danger of kidnapping, torture and so forth, so he has a “love interest” to yank about after him as he runs around evading bullets.

He also reconnects with old former colleagues who can help him. Freeman is predictably wise and twinkly; Malkovich is predictably nutty. Mirren, less predictably, has gun-totin’ skills. (One of these people is dying of cancer, so guess who gets to have the macho-sentimental supreme-sacrifice moment.)

Willis does most of the running around and displaying of martial-arts capabilities; the others are somewhat more sedate, though they are of course extremely good marks people.

As in so many action movies, they can take out an opponent with one neat shot while whole teams of enemies are raking them with machine-gun fire. But we have to accept that as Hollywood action-hero convention, just as we have to accept very quick recovery from incidental wounds.

At least Red plays its action (and its interaction) for laughs, and enjoyably so; The Expendables tried in places, but mostly it had the unfunny effect of a surgery-tightened face straining to shape a smile.

Willis is now bald, but at least he has good skin. And he seems in reasonably good shape, so a bout or two of fisticuffs is not entirely implausible. It’s his acting that is implausible and his mugging between action moments that is irksome: he appears to have acquired more ham with each wrinkle.

Malkovich and Mirren are fun, being highly intelligent actors, but Parker as the kidnappee and “love interest” (she’s the lady in Red; Mirren’s one of the boys) takes the honours for most attractive screen presence.

She has an unusual face, with a quirky look and a wry, offbeat manner; we really should be seeing more of her in the movies.

Perhaps she needs to learn to handle some very big guns.