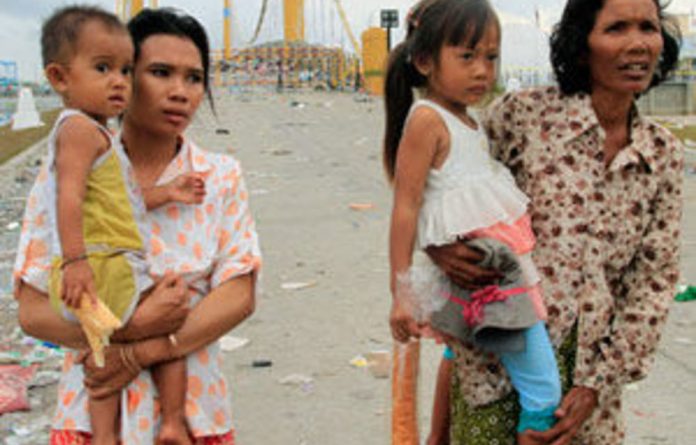 A stampede on a bridge in Cambodia’s capital killed at least 345 people when thousands panicked, pinning and trampling revellers on the last day of a festival marking the end of the rainy season.

The stampede began late on Monday on a small bridge lined with lights connecting Phnom Penh to an island where a crowd had gathered to celebrate the water festival and watch a concert.

Survivors said panic set in when several revellers were electrocuted. Police said some had shouted that the bridge was about to collapse, triggering the melee.

The victims suffocated or were trampled and some survivors said they were wedged into the crowd of living and dead for hours. Police sprayed water so survivors could drink, some said.

“It was packed. People were pushing each other and I fell,” Khon Sros (19) told Reuters from her hospital bed. “People were shouting ‘go, go’.”

She said some people had leapt off the bridge into the water to escape but she had been pinned in the crowd from her waist down until police pulled her out.

“One man died near me. He was weak and didn’t have enough air.”

Thousands of people had been eating in outdoor restaurants and were crossing the bridge to return to the city centre.

State television said at least 240 of the dead were women.

“I thought I was dead,” said Touch Theara (38) stuck in the crowd for three hours.

“Police sprayed water at us. We were just opening our mouths to drink,” she said.

Prime Minister Hun Sen apologised for the disaster in which at least 329 people were hurt. He ordered an investigation as television footage showed relatives weeping over the bodies of the dead piled one on top of the other.

“This is the biggest tragedy in more than 31 years after the Pol Pot regime,” he said, referring to the Khmer Rouge, whose agrarian revolution from 1975-1979 killed an estimated 1,7-million people in Cambodia under the command of Pol Pot.

“I ask you all to understand me and forgive me for this very bad situation.”

The prime minister declared Thursday a day of mourning.

Rows of dead
Emergency crews carried lifeless bodies and laid them out in rows for identification.

A paramedic tried to revive one victim before giving up in frustration. Other rescuers helped the injured into a fleet of ambulances as the rescue went on through the night.

Hun Sen urged the country to remain calm and ruled out terrorism as a cause for the catastrophe, which took place on the third and final day of the Bon Om Touk water festival.

The festival is the biggest carnival in a city that was for years starved of entertainment as it recovered from Khmer Rouge rule and years of war and isolation.

It marks the end of the life-giving rains when the swollen Tonle Sap river changes course and begins flowing back out of Cambodia’s great lake into the Mekong river and down to the South China Sea in southern Vietnam.

Flashing coloured lights along the sides of the small bridge at the heart of the disaster lit a road strewn with shoes, clothes and possessions dropped in the crush.

The bridge connects the capital to Koh Pich, or Diamond Island, a small stretch of land filled with new exhibition centres, restaurants and stalls.

It is particularly popular with women shoppers during the festival, when traders offer discounts on clothes and other goods.

The stampede was the world’s worst since January 2006, when 362 Muslim pilgrims were crushed to death while performing a stoning ritual at the entrance to the Jamarat Bridge near Mecca in Saudi Arabia. – Reuters