A farmer versus the mines 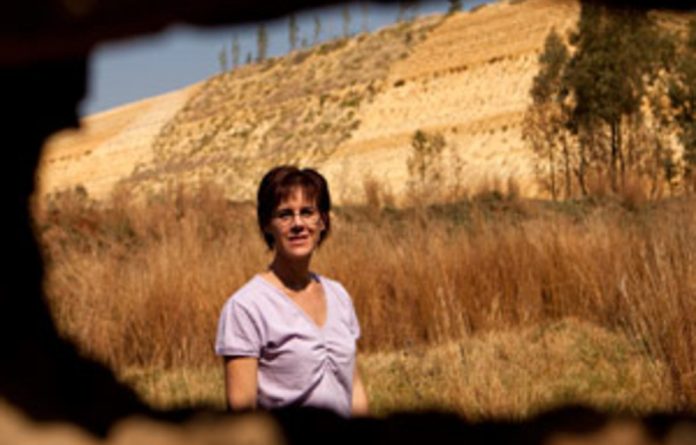 Renee Potgeiter is an animated woman.

She greets my colleague and I at the door of her small office tucked at the back of her sprawling property with her brown hair aflutter, a wide-eyed, beautiful baby clinging to her waist. She speaks rapidly — almost too rapidly and I find myself straining to hear every word — her arms flailing, her slim body constantly moving.

Much of Potgeiter’s boundless energy is currently wrapped up in anger. After buying a peat farm seven years ago, Potgeiter and her family began to worry about small but significant reports of acid mine drainage within the region.

“We saw a newspaper article in the Sunday Times about the Sterkfontein Caves — and my dad came to me and he said ‘what is this, look into this!’ I sat in front of my computer and I typed in ‘acid mine drainage’ and low and behold, wow! We had no idea this was happening.”

The Potgeiters farm is located near the Wonderfonteinspruit, in between Carltonville and Potchefstroom on the Far West Rand, which straddles Gauteng and North-West. The spruit is contaminated with mine waste, stemming both from local operations as well as Gauteng’s West Rand AMD decant which began in 2002.

While debates continue as to just how polluted the water is, Frank Winde of the North-West University at Potchefstroom notes that “[uranium] levels in water resources of the [Wonderfonteinspruit] catchment have increased markedly since 1997 even though uranium loads emitted by some large gold mines in the Far West Rand were reduced”.

‘No life forms here’
Environmental activist Mariette Liefferink was told by a consultant with the Department of Water Affairs who did testing of the Boskop dam, which sits on the lower end of the Wonderfonteinspruit, “there are no life forms there, there’s no chlorophyll … her personal opinion is that the water is not fit for drinking purposes.”

Despite an amalgamation of evidence, “there is action”, says Potgeiter. “What’s the point of showing that something is a problem if there’s no action to change it?”

Unfortunately for the Potgeiters, peat is known for its absorption qualities, soaking up carcinogenic heavy metals such as uranium as well as sulfates (salts). Peat is widely used within mushroom farming, prompting local producers to import from outside of the region, according to Potgeiter. “The public at large are not going to take the risk of eating mushrooms that has been grown with peat from a wetland with uranium.” In December 2007, the Potgeiter’s peat operation closed down.

The Potgeiters are not the first farm to be affected, and this isn’t a new problem either. A 1957 report by the Chamber of Mines to the Council for Scientific and Industrial Research noted potential problems with both de-watering, or pumping, basins of the gushing Witwatersrand in order to reach underwater gold, as well as “re-watering,” or decant. According to Liefferink, the government decided: “profits incurred by the mines, and therefore the government, were more substantial than the loss to the agricultural sector. Boerholes dried up, fountains dried up, it had severe impact on the farming community.”

“This whole area was written-off in favour of the economic value of mines,” says Potgeiter.

‘It’s inhumane to slowly murder people’
Beyond economic impact, the family’s health, environment, and livestock are in jeopardy. “We’ve got through a hell of a lot of animals on this farm,” says Potgeiter. “Most of them end up with kidney failure. They don’t last very long.” While her parents are avid gardeners, they had to stop growing their own vegetables because her mother was experiencing “stomach aches and aching fingers”. These symptoms stopped when she began eating produce grown outside of the area. The family also has “serious problems with diarrhea”, a side effect of high levels of sulfate consumption.

Potgeiter is most concerned about her eight-month-old baby, who happily gurgles and squawks through most of our conversation, looking attentively around the room and lovingly at her mother. “[My daughter] is a concern, because with the different elements you’ve got in your water — your cadmium, your nickel — those are carcinogenic, so it is a very real threat,” she says. “I don’t want to do anything that’s going to jeopardise my child’s future.”

Potgeiter took precautions during her pregnancy, especially in light of bio-accumulation, in which substances such as heavy metals accumulate in a mother’s body, potentially being passed on to her child at heavier concentrations. “What I feel is very important is that I had the choice,” she says. “I could drink bottled water while I was pregnant, I could eat vegetables that weren’t from the community, thereby ensuring that my child had the best chance possible.

“It’s a choice that other people don’t have because they’re not given the information,” she continues. “It’s inhumane to slowly murder people, and not be given the freedom of choice.”

When asked if she’d consider moving off the property in light of these concerns, Potgeiter replies “Of course, but it comes down to economics. We can’t sell our property, because knowing what we know if we sell it and the next farmer can’t farm, they’ve automatically got a case against us … You’ve got to disclose everything, and who’s going to buy? You can’t grow anything, you can’t sell anything, you can’t get rid of your property.”

Slow response
Given the slow government and industry response, “We’re past the point of mitigation,” says Potgeiter. “The only option now is legal action.” The family is taking DRD Gold to court, claiming that the company did not take necessary environmental precautions, thereby polluting the Wonderfonteinspruit and surrounding area.

While Potgeiter is hopeful that the case will pave the way for others to litigate, she also notes that many won’t speak out because of potential economic ramifications. Potgeiter has received death threats, encouraging her to keep quiet, “because the minute it goes into the newspaper, all of a sudden nobody wants to buy vegetables from this area”. While litigation could potentially result in millions of rands in reparation, it could equally result in a long, protected battle that favours the mines. “Because it’s such an uphill battle, most people would rather keep quiet, because how do you find the money for litigation? All this strain and stress to go through this long, drawn-out process,” she says. “We’ve been in litigation now for three years, and we’re only in our second issuing of summons.”