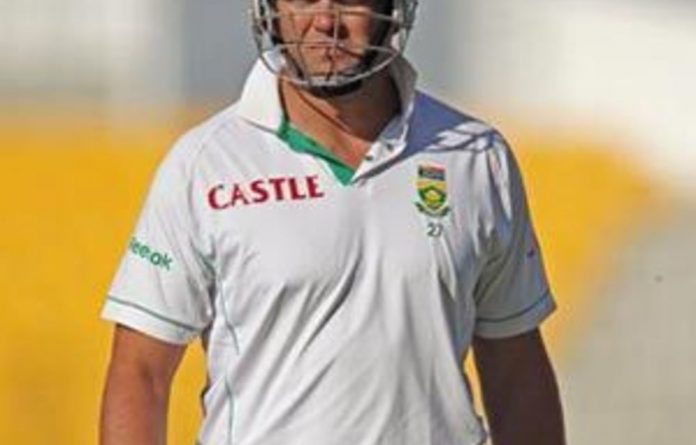 South Africa’s stand-in skipper Jacques Kallis laid into the flat pitches used during their test series against Pakistan in the United Arab Emirates, insisting they are not good for test cricket.

Twice the Proteas dominated the match, yet twice they were thwarted by the slow nature of the pitch and the resistance of Pakistan’s middle order. South Africa managed just three wickets as they pushed for victory on the final day in Abu Dhabi, while only three wickets fell in total on the final two days in Dubai.

Kallis, who was deputising for Graeme Smith as the regular skipper sat out with a finger injury, felt that the pitch in Abu Dhabi was so flat that it was good enough to play another test on straight away without gaining a result.

“The groundsman needs to ensure the game of test cricket stays healthy and produces a good contest between bat and ball,” Kallis said.

“Our spinners bowled well but there was absolutely no turn on that pitch and no pace either. Any team would have struggled to take 10 wickets, today, out there.”

Kallis cashed in on the pitches himself, scooping the man of the series award after scoring 323 runs over the two tests at an average of almost 108.

As frustrating as it was to draw the series 0-0 he felt that the Proteas had performed well, and that the results would come when they encountered more helpful conditions back home.

“I think the guys will take a lot out of the series and have got some good runs under their belt. The bowlers did not take as many wickets as they would have liked but the wickets played a role in that. As a unit, we’ve gained a lot of confidence.”

Although he felt that the pitches were an important contributing factor in the series ending in stalemate, Kallis also had praise for the way Pakistan performed after coming into the series without three banned players.

Most of the batsmen made contributions at some stage of the series, with youngsters Azhar Ali and Asad Shafiq backing up the more experienced players Younis Khan and new skipper Misbah-ul-Haq.

“I think we had them under pressure in the whole series and the Pakistan cricketers, especially the youngsters, came in and performed really well. Their cricket is looking positive,” said Kallis.

But he couldn’t help reinforcing his point about the pitches at the end: “They put in big performances and showed that they have the determination needed to survive in big games, though the tracks were flat.” — Cricket365