‘King of the dancehall’ to perform in Johannesburg 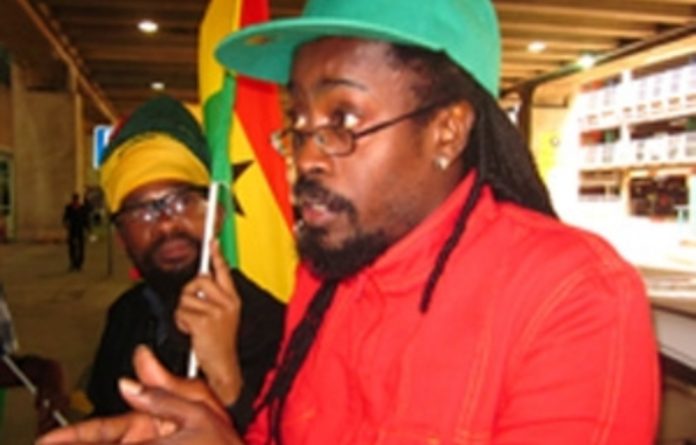 Anthony Moses Davis, better known as Beenie Man, received a warm welcome from fans at OR Tambo International airport on Wednesday, ahead of his ragga performance on Thursday.

The self-styled king of the dancehall was greeted by a troop of dreadlocked fans waving Rasta flags at the airport’s international arrivals terminal.

Bennie Man : Poses for the camera upon his arrival at OR Tambo International airport on Wednesday. (Nathi Gamede, M&G)

The ragga DJ may no longer be the dancehall superstar that he was back in the 1990s yet his body of work is still huge, his reach so wide and his style so distinctive that it has provided a template worked on by a new generation of DJs who have come after him.

The Jamaican-born Grammy award-winner started toasting at the age of five, encouraged by his uncle Sydney Wolfe, who played drums for Jamaican reggae legend Jimmy Cliff.

This marks his second visit this year after he performed in Zimbabwe’s capital Harare.

Dancehall champion Antony B, singjay Lutan Fyah, Jah Mason and Serbian-born muso Coyote will no longer be performing with Beenie Man as they missed their flights, according to Zingiswa Sigaba, managing director of Milla events and communications.

“They have sent a formal apology and there will be a show hosting them very soon”, Zingiswa Sigaba told the Mail & Guardian on Thursday.

Ticket prices dropped
The artists will perform at Newtown Square before heading to Cape Town, where they will perform at Blue Downs Stadium on Hindal Road on the Cape Flats. Doors open from 6.00pm.

King of the dancehall: Smiles at the crowd during his performance at Newtown Square on Thursday in Johannesburg. (Karabo Keepile, M&G)

According to Sigaba, ticket prices have now been dropped to R100 and if you already bought a ticket for R180 you can bring a person for free.

“This festival strengthens the relationship between the Jamaican contemporary reggae music and South African local reggae music … [It] further serves to prove that both countries share the same history on music that speaks to social issues and cultural experiences, post the slavery and apartheid years that both countries were facing,” Sigaba added.

Homophobic lyrics
In 2004, after being stopped by police at Heathrow airport and the cancelling of a concert in England, Beenie Man issued an apology through his record company.

It said, “While my lyrics are very personal, I do not write them with the intent of purposefully hurting or maligning others, and I offer my sincerest apologies to those who might have been offended, threatened or hurt by my songs.”

The apology was dismissed as a stunt by gay rights’ campaigners.

However, in 2005, gay rights group OutRage! suspended their opposition to Beenie Man after he agreed not to play songs featuring homophobic lyrics, and he performed in London that year.

Later, Beenie Man claimed that he was not homophobic and that his lyrics had been misconstrued. He said that his references to homosexuals referred to the rape of boys by child molesters.

In 2007, it was reported that Beenie Man had signed the Reggae Compassionate Act, a petition organised by the Stop Murder Music campaign, agreeing to renounce homophobia and desist from writing and performing lyrics promoting violence against gay people.