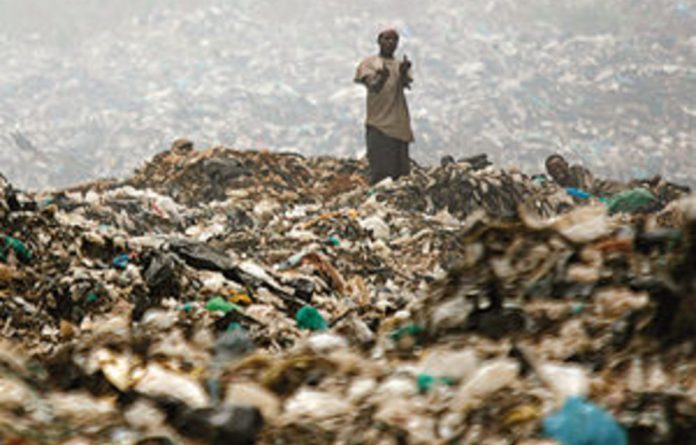 Bent double, Mwangi Mboya (25) crooks his neck under the sty door and upends a bag of waste for the sow inside.

Fat yet nimble, she scurries over, seven four-day old piglets dangling from her undercarriage.

It’s a scene that any farmer would be familiar with. Except that this is taking place on a dumpsite, Dandora landfill, outside Nairobi.

“Here, if I sell seven to eight pigs a year, I can make 50 000 Kenyan shillings [about R4 400] because I can collect all their food for free,” said Mboya, looking down on to the piglets suckling on one of her two sows.

Eight kilometres from the city centre, Dandora is a 13-hectare heap of unprocessed household, factory and hospital waste. The dumpsite was created more than 30 years ago and 2 000 tonnes of rubbish are dumped here daily, even though it was declared a health hazard for the neighbouring slum settlements as far back as 2001.

“It’s a health hazard and security hazard,” said Father John Weboota of the Comboni Missionaries, which works in the slum parish of Korogocho, which borders the site.

“People are selling drugs there and the police are afraid to go in, so crime is high. And more and more people are coming to our clinics with preventable diseases. All because of the dump.”

Medical consequences
A complex cocktail of chemicals means that the dumpsite often spontaneously combusts, sending smoke into the air and the lungs of the people who live beside it.

Medical records collected by the Kutoka Network, a group of Catholic parishes working across Nairobi’s slums, show that between 2004 and 2009 the number of patients treated at the Catholic dispensary increased by 44%. Respiratory cases went up from 765 to 3 356 in the same period.

Meanwhile, a report commissioned by the UN Environment Programme (Unep) three years ago warned that the residents of Dandora risked contracting killer diseases due to toxic substances from the dumpsite.

It examined 328 children aged between two and 18 years of age living around the dump and compared soil samples from the site with those from another location outside Nairobi.

High levels of lead
Half the children tested had concentrations of lead in their blood that exceeded internationally accepted levels, while 42% of soil samples recorded lead levels almost 10 times higher than those in unpolluted soil (more than 400 parts per million compared with 50).

“There are so many companies dumping here at very low prices that they just don’t care. And because they are paying taxes to the council to dump here, it has no incentive to close the dump down and set up a proper site further outside the city,” said Weboota.

Councillor Charles Atula rejected this and said that the authority had bought an alternative site outside the city. “We are just waiting for bidders,” he said, adding that an advertisement would appear in the local press soon. But even if it does, the Kenyan National Development Plan doesn’t call for the dumpsite to be closed until 2012, although the Nairobi council said that it would not be completely decommissioned until 2017 under the management masterplan for the city.

“So there are very conflicting views out there,” said Henry Ndede, programme coordinator for Unep’s Kenya country programme. “Either way, it will be at least 2012 until we begin sorting out Dandora. That might mean turning it into a sorting site for rubbish before it goes elsewhere for processing, or even tapping into the methane created by the site.”

That might mean a slightly healthier future for the people who live on its edges. But many are so used to the income they generate from it, whether it is farming pigs on low overheads or collecting plastic, that there is even nostalgia for the place.

“We don’t get sick here” insists Mboya. “We have resistance. But if the dumpsite goes, we will get sick.”

Driving in Nairobi a test of nerves — and patience