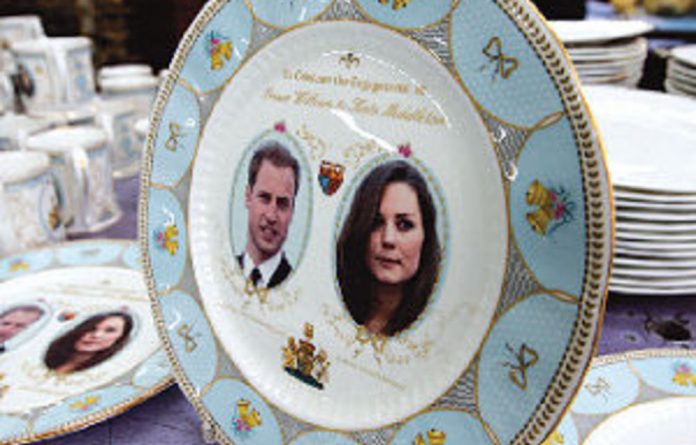 Prince William and Kate Middleton’s engagement on November 16 has already sent Chinese factories whirring into production, knocking out souvenirs to mark the great event. Asda was first to pay its respects, filling its shelves with a £5 commemorative mug.

Souvenir tea towels, plates, spoons and key rings will inevitably follow. Even Prince Edward’s wedding to Sophie Rhys-Jones triggered 120 lines of merchandise. But the vast majority of it will be worthless, says Eric Knowles, ceramics expert on BBC1’s Antiques Roadshow.

“One of the most popular items brought to us is the mug produced to celebrate the coronation of Edward VIII in 1936. People always think that because he abdicated, the mugs will be worth something, but in truth they were produced in huge numbers and are worth just a few pounds.”

Fergus Gambon, director of British ceramics at auctioneers Bonhams, says the vast majority of royal items presented for valuation are worth next to nothing. He says buyers really need to go back as far as Queen Victoria’s coronation before items become truly valuable.

“If you have a mug celebrating Queen Victoria’s coronation in 1838, these are much more collectable and can make very good money — anywhere between £400 and £600, depending on condition,” Eric Knowles suggests.

Queen Elizabeth’s own wedding to Prince Philip in 1947 was perhaps the last time when souvenirs were not produced in such vast numbers that it made them virtually worthless.

“If you look at memorabilia dating back to the last time Britain had a royal wedding during a period of austerity, 1947, that tends to be worth a bit more because there was less money around and less of the material was produced. There’s a popular Minton vase produced to celebrate the royal wedding that is quite big. These are now worth £300 to £400.” But if you are looking for something that really will prompt the gasps you have to go back 300 years.

Bonhams is preparing to auction what is probably the most valuable piece of royal memorabilia on the market. A Meissen teapot decorated with the coat of arms of Sophie of Hanover, the mother of King George I, which dates from 1713-14, is considered the earliest surviving dateable piece of Meissen porcelain and has an estimated value of £200 000 and £300 000.

Items made for use by the royal family themselves are where the big money is. “There is a famous dinner service that was commissioned for use at William IV’s coronation. Sadly it took the Rockingham factory in Yorkshire so long to produce it that by the time it was delivered, he was dead. Plates from this service are very collectable and would fetch £8 000 to £10 000.

“Pieces made for royal consumption are to be distinguished from those made as commemoratives, where values are usually lower, although items featuring portraits of monarchs in early English Delftware can sell for many thousands,” says Gambon.

The new leader of the Inkatha Freedom Party. Respect. The ‘royal couple’. Did anyone warn them about xenophobia?
Read more
Friday

Caught between the deep blue sea and devilish Libyan crooks

Three young men among 800 African migrants survived not only the wiles of the smugglers, but also a shipwreck in the Mediterranean Sea.
Read more
World

Marriage falls out of favour in Europe

Experts blame the economic crisis and changing social attitudes for the decline in weddings among young Europeans, as well as the falling birth rate.
Read more
World

King Tuheitia has rejected an offer to meet Prince William, wife Catherine and their baby Prince George on the UK royal family's trip Down Under.
Read more
Advertising
Continue to the category
Coronavirus