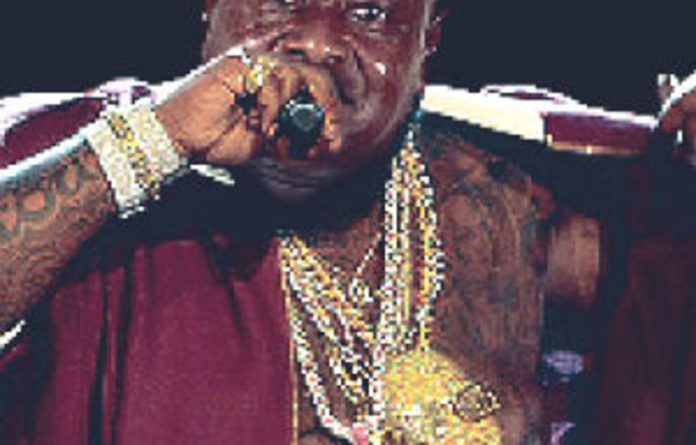 Ugandan President Yoweri Museveni has joined Robert Mugabe as yet another ageing African president who has been forced by elections to use hip-hop imagery to win the hearts and minds of the youth.

As campaigning heats up ahead of next February’s presidential poll, Museveni’s campaign song, Ekyevugo-Mpa Enkoni (“Give Me the Stick for Herding Cows”), has become popular in Uganda, both on the airwaves and on the internet. But in a country where 80% of graduates fail to find employment, some young Ugandans are unimpressed by the leader’s attempt to connect with the young, not least because he is thought to be 66 years old and has been in office for no fewer than 24 years.

Already, doctored photographs lampooning him have begun to appear.

They feature a half-naked president in hip-hop gear.
Earlier this month State House in Kampala issued a statement complaining that several media houses, especially those in the broadcast sector, had “picked on” the song to portray the president as a DJ, while some telecommunications organisations had converted it into a ring-tone.

“The president’s intention of reciting Mpa Enkoni was to emphasise African values to the youth and not for votes,” a statement signed by Tamale Mirundi, the press secretary, said.

“We, therefore, think that the pictures portraying the president as a DJ are in bad faith. Some of our people cannot tell the difference between computer-generated images and actual pictures.”

Museveni, addressing a group of youths he hosted at State House last month, recited the rhyme, drawing a comparison between modern rap and Kinyankole traditional kyevugo.

The Mail & Guardian recently reported that, apparently in preparation for elections in Zimbab­we, slated for next year, Mugabe had appeared in music videos talking to teenage rappers and rattling off street lingo over house beats.

One song, a speech once made by the octogenarian president mocking exiled Zimbabweans doing deadbeat jobs in foreign lands, has been autotuned over throbbing dance rhythms.

Providing the music is a group called The Born Free Crew, an allusion to Zimbabweans born after independence. Mugabe’s rap predictably received rave reviews in the state-owned Herald newspaper.