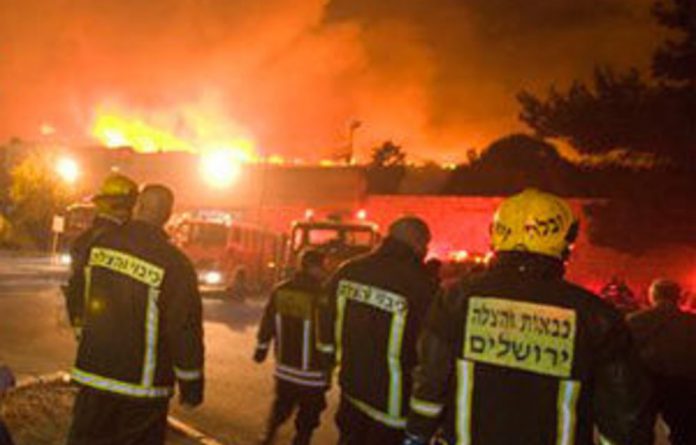 International firefighting teams were on Friday helping Israel battle a huge forest fire close to the port of Haifa which has killed at least 42 people and forced mass evacuations.

European planes and helicopters swooped over the Israeli woodland, dumping tonnes of seawater on to the flames, but the blaze continued to burn out of control for more than 24 hours after it started.

The largest fire in Israel’s history scorched more than 2 800 hectares of drought-stricken land, destroyed houses and exposed severe shortcomings in the country’s ability to tackle such an emergency.

The blaze took hold early on Thursday and Israel launched an international appeal for help just hours later when it became clear its own ill-equipped fire service could not cope.

At least 16 countries swiftly heeded the call, including Turkey, which put aside diplomatic differences to send two firefighting planes.

“I think this symbolises an unprecedented response to our request for international help,” Israeli Prime Minister Benjamin Netanyahu said after chairing an emergency cabinet meeting.

In a statement to Reuters TV, Netanyahu thanked those “standing shoulder to shoulder” and showing “solidarity with Israel,” telling neighbours Jordan and Egypt, Arab states that have peace treaties with Israel, “we are deeply grateful”.

Netanyahu also thanked Turkish Prime Minister Tayyip Erdogan for sending help, in what was the first time the pair had spoken in person since Netanyahu took office 18 months ago.

Once-solid relations with Turkey hit a low point in May when Israeli commandos killed nine Turkish activists while storming their boat destined for the blockaded Gaza Strip.

“I told Erdogan that we appreciate the major efforts during this time and I am sure that this will be a gateway to improving relations between the two countries”, Netanyahu said.

Might burn for days
As darkness fell after a second day of firefighting efforts, Israel’s fire chief said the flames might burn on for days.

“We are far from bringing it under control,” national fire chief Shimon Romach said. “I don’t believe we will be able to overcome it even tomorrow.”

Israeli media said 4-million trees had been lost so far in the blaze which was visible from the Mediterranean shore. Authorities told Haifa residents to shut their doors and windows to keep out the thick smoke.

Police also ordered the evacuation of 17 000 people from the Carmel Ridge, where the fire was focused, forcibly removing some locals who refused to leave their property.

Most of the victims were trainee prison officers, killed on Thursday when their bus was engulfed by flames as they headed towards a prison to help evacuate 500 inmates.

The first of the dead, many of them young men and women, were buried on Friday, Israeli flags draped over their coffins.

As the fire progressed, fanned by strong easterly winds, there was barely concealed anger that so many lives were lost in a country that spends billions of dollars a year on weaponry but significantly less on its emergency services.

“What would we have done if faced with dozens and hundreds of missiles that might have ignited fires in several areas, including urban areas with multi-story buildings?” asked the top-selling daily, Yedioth Ahronoth.

Some Israeli newspapers speculated that the fire might have been started deliberately, and one suggested it might prove to be the “worst terror attack” in Israel’s history.

Israeli police were still investigating whether the blaze was caused by arson or negligence, the country’s police chief David Cohen told reporters. — Reuters