For Strauss-Kahn, hard to quit IMF amid debt crisis 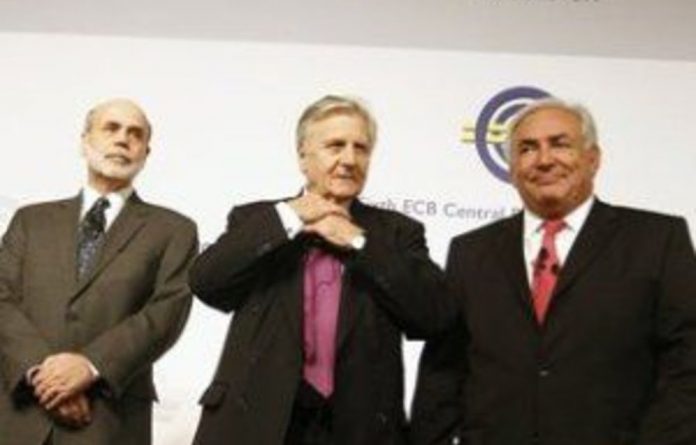 Abandoning his perch above the International Monetary Fund (IMF) to plunge back into French politics is a delicate decision for Dominique Strauss-Kahn as his institution battles a eurozone financial crisis.

Will he leave or won’t he? The question is racing through France and Washington as Strauss-Kahn is three years into his term as IMF managing director, with two more still to go.

Speculation about the former Socialist finance minister picked up volume last week after fellow Socialist Segolene Royal threw her hat into the ring for the 2012 presidential election.

DSK, as he is known, has come under mounting pressure to declare whether he will give up his job with the IMF to run for the presidency against President Nicolas Sarkozy, the presumed candidate of the centre-right UMP party.

Sarkozy beat Royal in the 2007 run-off vote but his popularity has plummeted amid scandals and unpopular pension and economic reforms, while opinion polls back Strauss-Kahn for president.

At the Washington headquarters of the 187-nation IMF, the subject of whither DSK is raising red flags. IMF spokespersons and delegations are dodging the question.

“There are a lot of rumors,” a representative of one of the European Union’s 27 member countries told Agence France-Presse, speaking on condition of anonymity and praising the IMF chief’s performance in confronting the eurozone debt crisis.

“Whether he will leave is a political subject, I refrain from commenting on that. Again he’s doing a very good job and we hope he’ll continue to do it,” he said.

Time for new leadership
Strauss-Kahn (61) should be, it seems, the last European elected to the post for a long time.

Speaking in the Indian capital of New Delhi Thursday, the IMF chief said he was sure the six-decade-old traditions of leadership of the IMF and sister institution the World Bank had run their course.

“The so-called agreement between the United States and Europe whereby the IMF head was European and World Bank president was an American is over,” said Strauss-Kahn, a vocal advocate of giving more weight to emerging nations to reflect their importance to the global economy.

But Europe is in dire need of the IMF, which has been a bulwark in helping to stabilise the public finances of the European Union.

“One of the great works of Mr Strauss-Kahn was to have the IMF come into the euro area,” said Adam Lerrick at the American Enterprise Institute, a Washington think tank.

Quick compromise expected
The economist however ruled out a “war of succession” that would consume time and energy of IMF member nations.

“If turmoil continues on the markets, it won’t be the time to have a huge diplomatic debate in the midst of a financial crisis,” he said.

“There will be a quick compromise. They could pick a European to serve for a year and a half, until when Dominique Strauss-Kahn’s mandate is supposed to end,” he added.

That would allow time to focus on the Chinese, Indian, Brazilian or Mexican candidates who have been the target of press speculation for the past several months.

Strauss-Kahn is keeping his cards close to his chest.

On the 2012 presidential race, he indicated he would not be a candidate to German magazine Stern on November 17. “I’m going to see my term as IMF managing director through to the end. And the term ends in 2012.”

But he has not ruled it out, telling French radio RTL “in certain circumstances, I could rethink this question” on February 4.

He also has hinted he has been giving the matter of his departure some thought. “It’s not a given that the day when I have an answer to this question, I’m going to give it through the media,” he told French public radio France Inter on November 15. — AFP

The loan, which is repayable over five years at an interest rate of 1.1%, comes with various self-imposed conditions such cutting the public wage bill and rationalising support to the state-owned entities
Read more
Coronavirus

The Covid-19 pandemic provides a chance to reflect on, reimagine and reset the global economic system
Read more
Coronavirus

This time, the IMF is not to be feared

The International Monetary Fund’s emergency funding is cheaper than other options and is low risk. The Reserve Bank creating money to finance government debt is a better option
Read more
Africa