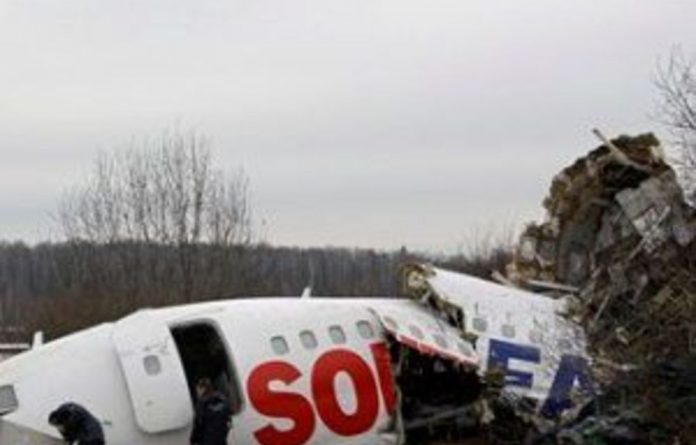 Russia on Sunday named two passengers killed in a Moscow plane accident amid reports that human error could have caused the Russian-made aircraft’s engines to fail, forcing it to crash land.

The Dagestan Airlines plane bound for Makhachkala in the North Caucasus region of Dagestan with 169 people on board rolled off the runway at Domodedovo airport Saturday and broke into three pieces, killing two and injuring more than 80.

Moscow transport investigators named the dead as Roza Gadzhiyeva, the mother of a judge in Russia’s Constitutional Court, and Gadzhimurad Magomedov, the brother of the president of Dagestan, Magomedsalam Magomedov.

The Interstate Aviation Committee, which examines aircraft after crashes, said on Sunday it had opened the plane’s black boxes and discovered “fluctuations in the fuel supply to all three engines” shortly after takeoff.

Two engines cut out minutes later, it added, but said that contrary to earlier reports, one continued to run until landing.

Investigators opened a criminal probe into failure to follow safety procedures and said on Sunday they were examining all scenarios, but reports questioned whether human error was responsible.

A source close to the investigation told the RIA Novosti news agency the crew decided to take off despite two defects on the plane, without elaborating.

Human error
The crew possibly forgot to switch on fuel pumps while taking off, allowing air to enter the system, a law enforcement source told the Interfax news agency.

“All the specialists agree that probably the reason for what happened was human error,” the source told Interfax.

The head of the Russian Aviation Agency, Alexander Neradko, said Saturday that the pilot had to land the aircraft in difficult weather conditions with low cloud hiding the runway lights until the plane was close to the ground.

The airline’s general director, Mirza Omariyev, said Saturday in televised comments that the Tupolev-154 plane, dating from 1992, had a major refit in 2009 and was flown by an experienced crew.

The plane transported the Belgian national football team to a friendly match with the Russian football team in November, Omariyev said.

The team were photographed beside the plane, which carried the logo South East airlines as part of rebranding launched this year.

RIA-Novosti news agency quoted an anonymous source inside Dagestan Airlines as saying that the company’s Tupolevs were in bad shape.

“Most aircraft and notably the Tupolev-154 have totalled many hours and should be replaced. This incident, with three engines failing, again shows that the company should tackle flight security in a different way,” said the source.

The airport where the plane took off, Vnukovo, said its staff thoroughly checked the plane before the flight. After the accident, it checked the fuel container used to refuel the plane and found no problems.

The Tupolev-154 has a chequered record, with the most recent crash in April when a plane carrying Polish president Lech Kaczynski and 95 others came down in fog in northwestern Russia, killing all on board.

The bodies of the two people killed in Saturday’s crash were flown to Dagestan in a chartered plane on Sunday, the Russian Aviation Agency told the ITAR-TASS news agency.

The health ministry said on Sunday that 54 people remained hospitalised after the crash, five in a serious condition. — Sapa-AFP