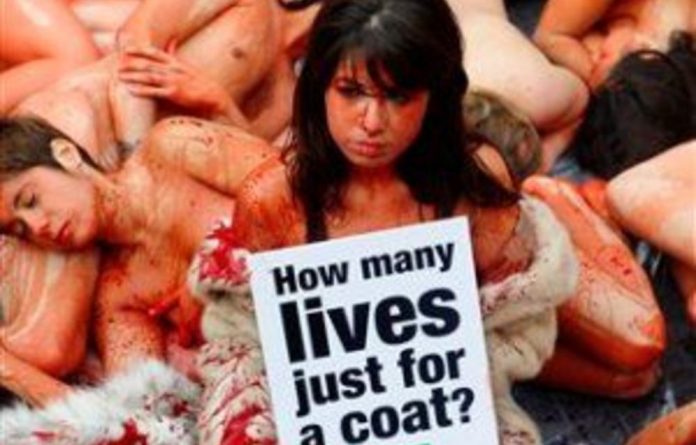 About 50 animal rights activists staged a naked protest on Sunday at a square in Spain’s northeastern city of Barcelona to denounce the torture and slaying of animals to make fur coats.

Representing the number of animals that it takes to make a fur coat, the men and women, covered in red paint that resembled blood, lay down and curled up on top of one another at Sant Jaume in the historic centre of the city.

“How many lives just for a coat?” read a black and white sign held by a young woman.

“People who are sensible to animal suffering see garments made from fur as acts of cruelty and pain, not as luxury items. Animals need their fur, we don’t,” said Leticia Olivares, a spokesperson for international animal rights group AnimaNaturalis which staged the demonstration.

Millions of foxes, minks, otters, beavers, lynxes and other species are raised in captivity in small cages or captured and then killed in brutal ways such as drowning or electrocution to make fur coats, according to the group.

Spain along with Greece, Germany and Italy are key manufacturers of fur garments, according to the group.

In Spain fur farms are mainly in the north of the country, while the fur clothing industry is found mostly in the region of Catalonia where Barcelona is located. — Sapa-AFP

South Africa is working towards establishing a publicly-funded universal health service and now, amid the coronavirus pandemic, is the time to implement it
Read more
Advertising
Continue to the category
Politics