Westwood triumphs to remain number one 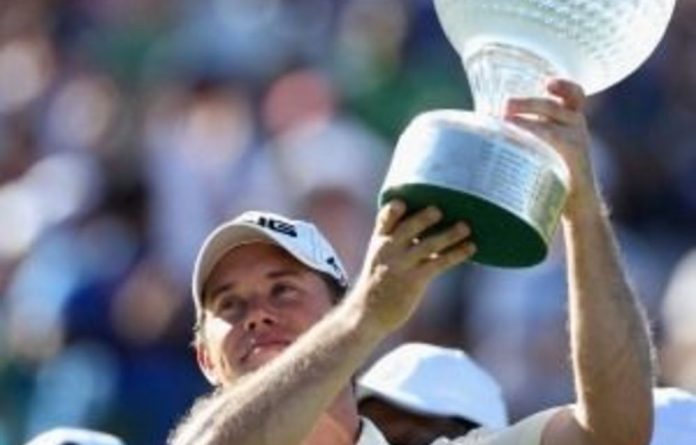 Lee Westwood of England shot a final-round 68 on Sunday to win the Nedbank Golf Challenge by eight strokes and remain world number one going into the new year.

The 37-year-old needed a top-two finish at the northwest South African resort to ensure he stayed ahead of American golf icon Tiger Woods, who was poised to win the Chevron World Challenge in California later on Sunday.

Westwood chipped into the hole from behind the green at the final hole to finish a four-under round of 68 on a high and dogged South African Tim Clark carded a 71 to snatch second place.

It was the second tournament triumph of the year after the mid-year St Jude Classic for Westwood, who lists cars, cinema, snooker and backing second-tier English football club Nottingham Forest among his interests.

“What a wonderful way to finish my season — chipping in at the last hole. I have come close to winning this tournament and finishing first today is very special,” said Westwood.

“I took nothing for granted going into the final round as sometimes a big lead (five strokes) can put more pressure on you, but birdies at nine and 10 set me up nicely for the back nine.

“My caddie Billy Foster deserves a lot of credit for this victory. He always gives me the right information and we are going to have a great Christmas staff party — the two of us.”

South Africans battle for second place
Trailing Irishman Padraig Harrington by two strokes after the opening round of the 12-man invitation tournament known as the African Major, Westwood fired an eight-under 64 on the second day and never looked back.

He stretched his advantage to five strokes three rounds into the pursuit of a record $1,25-million first prize and was never threatened over the final 18 holes on another hot, early summer day at Sun City.

Long before the final putt dropped, the battle was not for top spot but the runner-up place between Clark and fellow South African Retief Goosen at the par-72 Gary Player Country Club.

“Only your wife and your pet remember when you finish second,” joked South African golf legend Player as the struggle unfolded, but there was a $210 000 gap between runner-up and third places.

And Clark, recovering superbly after being the only golfer over par after the opening round, who finished closest to Westwood as he compensated for less distance than rivals off the tee with accuracy and a clinical short game. — Sapa-AFP