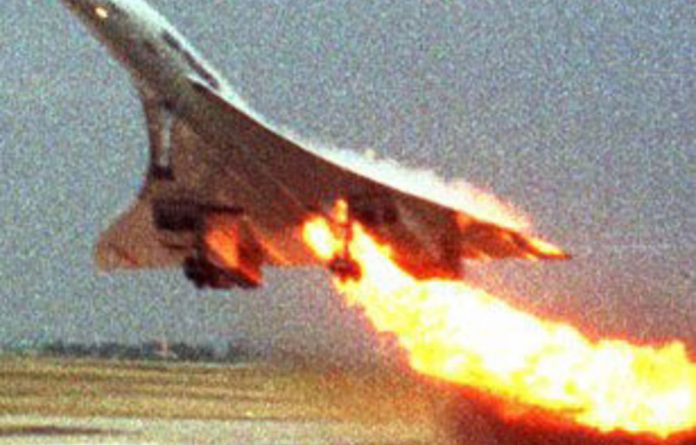 A French court fined Continental Airlines on Monday over the 2000 Concorde crash in which 113 died, but did not jail anyone over a disaster that effectively ended commercial supersonic air travel.

The court found the US airline criminally responsible for the Paris crash, caused by a piece of metal that fell from a Continental DC-10 and later shredded the supersonic jet’s tyre, which led to a fire in the fuel tank.

Continental was ordered to pay a fine of €200 000 for the crash and to pay Air France a million euros in damages.

His supervisor, Stanley Ford, accused of approving Taylor’s work without checking it, was acquitted, as were three French aviation officials, including the former head of the Concorde programme, 81-year-old Henri Perrier.

Perrier — who directed the Concorde programme at Aerospatiale, now part of EADS, from 1978 to 1994 — had been accused of ignoring warning signs from a string of incidents on Concorde planes before the accident outside Paris.

Ball of fire
Flight 4590 to New York smashed into a hotel in a ball of fire just after take-off from Charles de Gaulle on July 25 2000, killing 100 passengers and nine crew on board and four people on the ground.

The court said the officials were guilty of “no serious misconduct” after being accused of failing to draw lessons from exploding tyre incidents that dogged Concorde from 1979 to when the fleet was permanently grounded in 2003.

The officials had made design changes to strengthen the supersonic jet’s tyres but not the fuel tanks.

Continental had denied that the titanium strip triggered the disaster by shredding Concorde’s tyres, with lawyer Olivier Metzner insisting the supersonic jet had already been on fire for 700m of runway.

Metzner swiftly said that the US airline would appeal the verdict, slamming a ruling that “only protects French interests”.

He maintained throughout the four-month trial hearings that ended in May that Concorde operator Air France’s maintenance was negligent and the plane should never have been allowed to fly.

But the court ruled that “none of the evidence collected or witness testimony corroborates” this theory, instead criticising Continental for its “defective maintenance”.

On hold
A separate suit by Air France against Continental for commercial damages has been on hold pending the outcome of the criminal trial.

The prosecution had demanded a fine of €175 000 for Continental and suspended jail terms for the two Americans as well as for Perrier, who was absent from court because of health reasons.

A French accident inquiry concluded in December 2004 that the disaster was partly caused by the strip of metal that fell on the runway from the Continental plane that took off just before the supersonic jet.

The Concorde ran over the super-hard titanium strip, which shredded one tyre, causing a blow-out and sending debris flying into an engine and a fuel tank and setting it on fire, according to investigators.

During their 27 years of service, the jets suffered dozens of tyre blowouts or wheel damage that in several cases pierced the fuel tanks — a flaw that Perrier’s team and the French civil aviation were accused of missing. — AFP