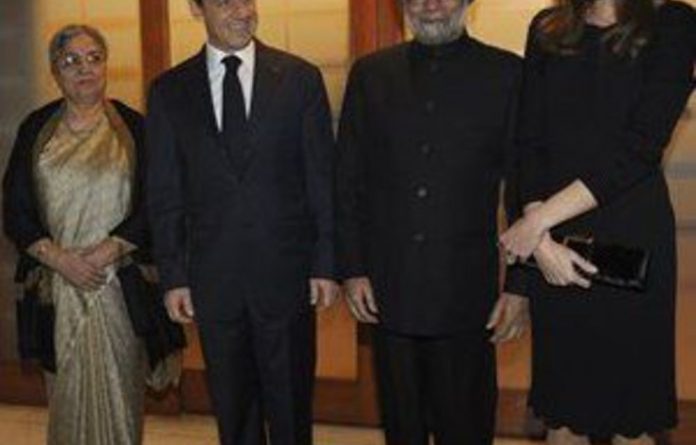 French President Nicolas Sarkozy was to hold talks with Indian Prime Minister Manmohan Singh on Monday in New Delhi, with a new deal on nuclear power set to be the centrepiece of the meeting.

The president is on a four-day trip to India where he is seeking deeper commercial ties while acknowledging his hosts’ increased role on the world stage.

British Prime Minister David Cameron and United States President Barack Obama have both swept through India with similar messages recently, as Western nations look for export opportunities in a fast-growing country seen as a natural ally in Asia.

Sarkozy heads a delegation of six ministers and around 70 chief executives, including the bosses of aircraft and defence groups Dassault Aviation and the European Aeronautic Defence and Space Company (EADS), as well as the state-controlled nuclear conglomerate Areva.

Areva is set to sign a “framework agreement” with India’s Nuclear Power Corporation which will firm up orders for two reactors for a plant in the western state of Maharashtra, a source in the French presidency said.

Areva hopes to supply six reactors in total for the $22-billion project, which was recently cleared by the Indian environment ministry.

Arms sales
France is also seeking a slice of the billions of dollars earmarked by India for a military upgrade, but competition is fierce among foreign arms manufacturers, and officials in New Delhi have said no contracts would be signed on Monday.

Sarkozy’s visit is his first to a G20 state since France took the presidency of the group of developed and major developing economic powers.

During a dinner with Singh on Sunday, the Indian premier pledged his “support” for Sarkozy’s G20 programme, which includes overhauling the global monetary system and combating commodity price volatility, the presidency source said.

Sarkozy and his wife Carla Bruni, a singer and former model, went sight-seeing at the ancient city of Fatehpur Sikri, outside New Delhi, on Sunday after a romantic sunset visit to the Taj Mahal on Saturday.

The French leader last visited India in 2008, just before he married Bruni, and he vowed then to return with her to see the Taj Mahal, located in the city of Agra 200 kilometres from New Delhi.

“It was Bruni’s first visit to the Taj and she seemed completely floored by what she saw,” the Times of India reported on Sunday.

Bruni, who is a goodwill ambassador for the Global Fund to Fight Aids, tuberculosis and malaria, is expected to visit an Aids project on Monday.

Trip around India
Sarkozy began his Indian trip in the southern city of Bangalore, a major technology centre, where he reiterated France’s support for India to gain a permanent seat on the United Nations Security Council.

He also welcomed cooperation in space that will lead the two countries to jointly launch satellites to monitor the climate and oceans next year, and expressed a desire for more Indians to study in France.

He completes his visit on Tuesday with a trip to Mumbai, India’s commercial capital that was hit by Islamist militant attacks two years ago in which 166 people were killed.

Sarkozy’s visit to India comes between that of US President Barack Obama last month and ahead of trips there by Chinese Premier Wen Jiabao and Russian President Dmitry Medvedev. — AFP

Something has changed in the public reading of character. A celebrity's capacity for bullying is read by the audience as honesty
Advertising