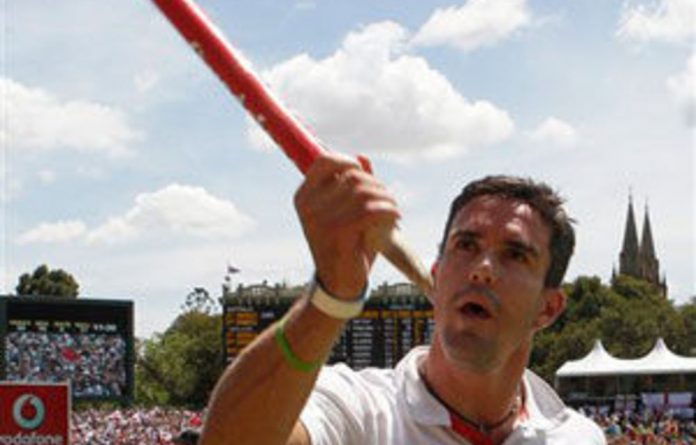 England won the second Ashes Test by an innings and 71 runs to take a 1-0 lead in the five-match series after dismissing Australia’s last six batsmen for 66 runs in the first session of the final day on Tuesday.

Graeme Swann completed a five-wicket haul and James Anderson took two wickets in two balls as the tourists’ took their first Test victory on Australian soil since the 2002/03 tour and a first series lead in Australia since 1986/87.

“We never gave them a look in in the game,” England captain Andrew Strauss told reporters. “We need to enjoy this and savour it, because it was a special victory for us … but it’s important that we don’t let the Australians back in the series now.

“We know the game of cricket and we know it has a way of biting you if you start patting yourself on the back too much.”

Australia resumed on 238-4, having lost the key wicket of Michael Clarke to part-time spinner Kevin Pietersen on the last ball of day four.

With Clarke, his team’s best player of spin, back in the pavilion, the Australians were always going to struggle on a fifth-day pitch providing turn for Swann.

No gritty fightback
Any hopes of a gritty fight back to salvage a draw were extinguished quickly when Mike Hussey, who had been the pick of Australia’s batsman in the series to date, attempted a rash pull shot off the bowling of England quick Steve Finn.

Anderson took the easiest of catches at mid-on to remove Hussey for 52, then struck with his own bowling, dispensing with Brad Haddin courtesy of an outside edge for 12. Anderson then trapped Ryan Harris lbw for his second golden duck of the match on the next ball, though he was denied a hat-trick when Xavier Doherty fended off a short-pitched delivery on the first ball of his next over.

In between Swann had accounted for the out-of-form Marcus North with a plum lbw, although he was forced to call for the TV umpire after his appeal was refused, to give England three wickets in four deliveries.

The spinner then delivered the coup de grace, clinching a comprehensive victory by bowling both Doherty for five and Peter Siddle for six to finish with 5-91 and leave the Australians all out for 304.

The final dismissal prompted wild celebrations on the pitch as the players rushed to embrace as England’s “Barmy Army” of cricket fans roared with delight.

“It’s better this year for the English, I watched it on TV last time and it’s nice to reverse fortunes,” Swann said, referring to their match at Adelaide four years ago when the English batsmen were skittled for 129 runs in the second innings on the way to defeat.

‘It’s a bad loss for us’
Australia skipper Ricky Ponting, who was dismissed for a golden duck and nine runs in his 150th Test match, paid tribute to the quality of England’s performance.

“No doubt it’s a bad loss for us, there’s no hiding that fact, an innings and 71 runs having won the toss on a good Adelaide wicket, probably just about says it all,” he said.

“They’ve outbatted us, outbowled us, and outfielded us this entire game … We’re going to have to be at our very best if we’re going to work our way back into this series.”

England suffered a blow before play commenced with the news that fast bowler Stuart Broad had been ruled out of the rest of the series with a torn abdominal muscle.

“He’s distraught and we’re distraught that he’s going to be leaving us because he’s a big part of our team both on and off the field,” Strauss said.

“He’s been one of the mainstays of our bowling attack for quite a while now and he’s got all the ingredients to bowl well in Australia. We’re devastated for him.”

Australian batsman Simon Katich is also likely out for the series with an Achilles injury, the Australian team said shortly before England wrapped up the victory.

“It’s a big loss for us, no doubt,” said Ponting. “He’s been one of the leading openers in Test cricket since he forced his way back into the team. He’s an experienced player and a great character to have around the team.” — Reuters