A case of truth, lies and videotape 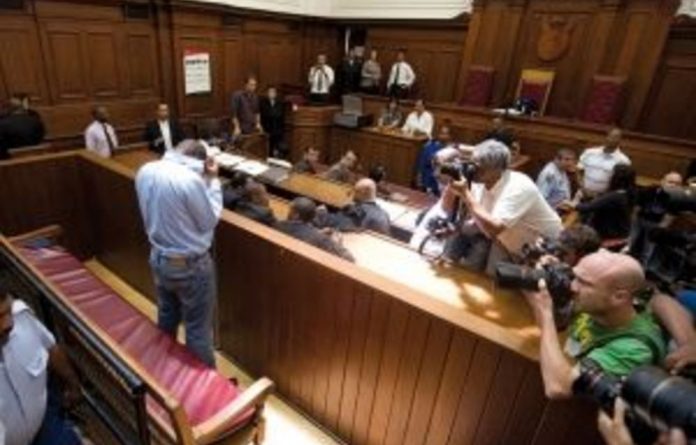 Police have collected damning evidence from a hotel closed-circuit television video of British tourist Shrien Dewani handing sentenced murderer Zola Tongo a small plastic bag, which the taxi driver will testify was the R1 000 cash he allegedly paid him for his role in the premeditated killing of Anni Dewani.

A Mail & Guardian investigation has revealed that the video was captured on security cameras at the five-star Cape Grace hotel in Cape Town, where the honeymoon couple had been staying.

Shrien Dewani was revealed as the alleged mastermind behind the death of his wife Anni in a dramatic turn of events in the high profile honeymoon murder case. View our slideshow as events unfolded at the Western Cape High Court on Tuesday December 7 2010.

Reliable sources close to the case said the video was dated November 16 this year, which was two days after 28-year-old Anni Dewani’s body was found in Tongo’s VW Sharan taxi in Khayelitsha with a single bullet wound to her neck. Thirty-year-old Dewani flew out of Cape Town that same night, free to leave the country because he was not yet a suspect in the murder investigation.

In another major breakthrough for the police, the M&G has been informed, they picked up another suspect early in the investigation, who has now turned state witness. The man did not take part in the fake hijacking, but acted as a middleman, putting Tongo in touch with Mzwamadoda Qwabe, who police claim was one of the two gunmen hired to ambush the car.

Dewani told the police the couple had been hijacked after taking a late-night detour in Tongo’s taxi to Gugulethu township, where many residents do not venture out after dark because of the area’s spiralling crime levels.

Police began focusing on Dewani only shortly after he left the country, following the swift arrest of the four other suspects.

When the M&G broke the story three weeks ago that Dewani was also a suspect in the police investigation into his wife’s murder and would be charged and arrested if he returned to South Africa voluntarily, or be extradited to face trial, the police issued no denials.

On Tuesday night Dewani handed himself over to the Bristol police and was arrested on a South African extradition warrant. When he was granted £250 000 bail in the Westminster Magistrate’s Court in London, the South African authorities immediately lodged an appeal.

Sources close to the case say police are not, at present, looking at the possibility that money might have been a motive for the murder. But problems that emerged during the honeymoon are now considered key to unravelling the case, they say.

Although South Africans who have lost loved ones to crime frequently moan about the slow police response in murder investigations, in this high-profile case the police have worked with astonishing speed, compiling compelling evidence that they intend to use against Dewani if he is extradited to face trial and against murder accused Xolile Mngeni and Qwabe.

Legal sources say this is due in no small part to the fact that the hand-picked team of crack police from the Hawks unit, led by Captain Paul Hendrikse, are renowned for their success rate in solving cases.

On Monday in the Western Cape High Court Tongo implicated Dewani, describing in his statement read out in court how Dewani had hired him to find hitmen to murder his wife. The taxi driver hung his head and cried in court as he was sent to jail for 18 years in a pre-determined plea and sentencing agreement he signed with the state. Tongo received a mere R1 000 for his part in the plot.

Some of the compelling evidence the police have gathered in the murder investigation includes:

Video
Sources who have viewed the high-resolution CCTV video said Dewani walks into the room “with a little plastic bag” in his hand. Tongo walks in next and is handed the plastic bag by Dewani. The taxi driver then sticks the plastic bag under his clothes and goes into the toilet. Police believe this is where Tongo counted the money. Dewani leaves the room after Tongo goes to the toilet.

The video tallies with Tongo’s statement before court this week, in which he claimed he met Dewani after the murder of his wife.

“Subsequent to the deceased’s death, I met with Shrien Dewani at the hotel on November 16 2010, where I received R1 000 as payment for my role in orchestrating the murder, robbery and kidnapping of the deceased,” he said in the court papers.

Records of a CCTV video of a prior meeting between the two men at the hotel have also been recovered, the M&G has learned.

Cellphone messages and calls
Other evidence stockpiled by police against Dewani, Mngeni and Qwabe includes a comprehensive trace on cellphone calls between the men, the M&G has learned.

The electronic signature determines by triangulation where the accused were at the time of the calls and the time it took to travel between the cellphone towers.

Police also have damning SMSs sent by Tongo to Dewani and Dewani to Tongo on the night of the murder.

In his statement read out in court by the director of public prosecutions in the Western Cape, Rodney de Kock, Tongo stated that Dewani had devised the hijacking plot. On the night of the murder, he said, the gunmen were not waiting at the agreed spot in Gugulethu on their first drive into the township. Tongo then drove out to the Strand and contacted the gunmen. The couple ate their last meal together at the Surfside Restaurant before proceeding again to the township.

“While driving, either on the way to Somerset West or on our way back, I sent a text message to Shrien Dewani not to forget about the money,” admitted Tongo in his statement read out in court. “He answered by way of a text message that the money was in an envelope in a pouch behind the front passenger seat.”

Tongo’s statement claimed the plan was that he and Dewani would be released unharmed from the vehicle. The taxi driver will testify and allege that the money discussed in the texts and left in the vehicle was the R10 000 that had been promised to the killers.

Police torture
While sources close to the case claimed that both murder accused Mngeni and Qwabe had, in separate interrogations and confessions, implicated Dewani in the murder plot to kill his wife, the attorneys representing the two men, Vusi Tshabalala and Thabo Nogemane, declined to comment. Both attorneys claimed to the M&G last week that their clients had been tortured or assaulted by police. It is expected these torture claims could result in a trial within a trial to test the admissibility of the confessions obtained by police.

‘Section 204’
The evidence of Tongo and the “section 204” state witness in the case will prove vital in the upcoming murder trials.

“Shrien Dewani had no involvement in the death of his wife Anni,” said Montgomery. “He is devastated by her murder and the false allegations that have been made against him and welcomes the chance to clear his name through the courts”.