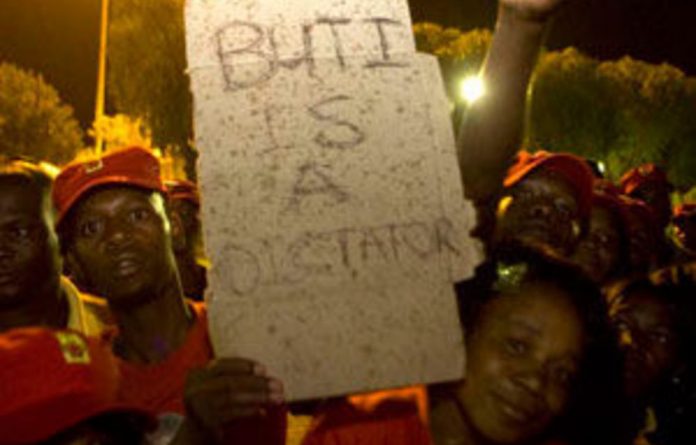 The Young Communist League (YCL) will emerge out of its congress strong and united, President Jacob Zuma said on Sunday.

“You need to put any differences you may have had aside, and forge ahead with efforts to build unity,” he said.

Speaking at the closing rally of the YCL national congress in Mahikeng, North West, Zuma said the tripartite alliance must move together to build a nation free from hunger, disease and poverty, and a country in which there was security, jobs and comfort.

“That is what unites all of us, both communists and non-communists within the ANC-led alliance. We all seek the creation of a better life for all our people.”

He said in the process of work and life of the alliance, communists must stand out in many different ways, in the manner in which they do things.

He said other qualities of a communist were that they are disciplined and honest.

The police were called to restore order at the congress on Saturday when chaos broke out between delegates, with at least four delegates hospitalised.

Learning from Cuba
Zuma also told the rally that SA has a lot to learn from Cuba.

“This is just a small, poor island that has been facing an economic blockade for over 50 years now.”

However, the amount of work that it does at an international level was outstanding.
“Its contribution to the education and health spheres in the world is phenomenal. Cuba is a major producer of doctors and other health care professionals.”

He added that Cuba does not just produce doctors but also provides training of young people as medical professionals for SA and other parts of Africa.

“One of the major lessons we must glean from Cuba is the depth of their internationalism and patriotism, and how they successfully balanced these two to produce good citizens for their country and the world.”

He said the Cuban value system was based on patriotism, national pride and a very deep sense of national history, culture and was also based on an ethic of hard work. — Sapa