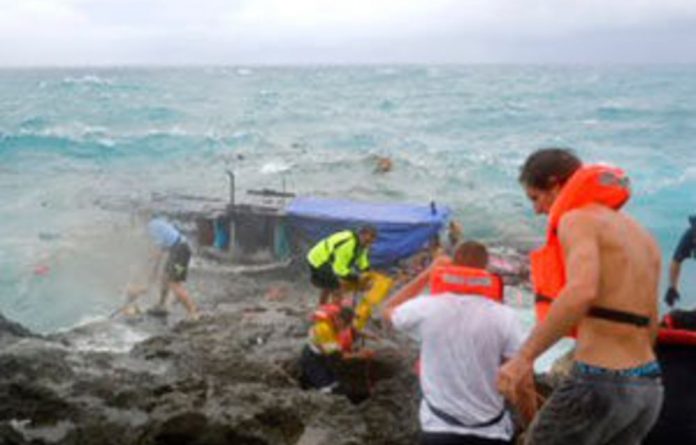 A timber boat carrying asylum speakers smashed onto rocks on Australia’s remote Christmas Island on Wednesday and dozens of passengers were feared drowned trying to swim ashore after being pitched into stormy seas.

Television footage showed the boat rammed bow first onto the rocks, splintering and sinking, and its passengers being smashed by waves against the rocks.

Local media said 41 people had been rescued, but some 30 were still missing after the boat was destroyed around 6am local time.

“A number of people have been rescued, but sadly some bodies have been retrieved,” Australia’s acting Prime Minister Wayne Swan told reporters. “This is a serious incident.”

An Australian navy boat and a Customs vessel were helping to rescue people, while Christmas Island residents threw life jackets into the stormy sea.

“Local people [were] trying to assist and throwing life lines out but the horrendous conditions of the ocean at the moment wasn’t allowing anybody to get close,” witness Michael Foster told Sky News television.

“You didn’t want to be anywhere closer to the cliff face because it’s razor-sharp and the four-metre swells were throwing people around. I would suggest I saw about 30 who didn’t make it.”

Christmas Island, south of Indonesia, is a regular destination for refugee boats, and is home to Australia’s main offshore immigration detention centre. — Reuters