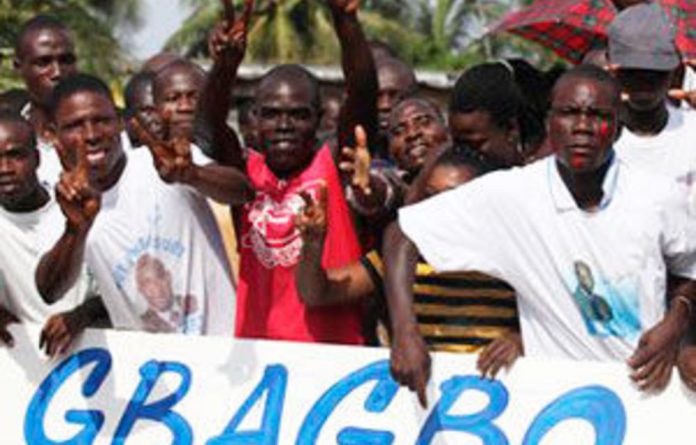 Tension mounted between Côte d’Ivoire strongman Laurent Gbagbo and the international community on Monday, as the United Nations complained of rights abuses and the European Union slapped sanctions on him.

Gbagbo has rejected demands he cede power to his rival, Alassane Ouattara, and has instead ordered UN peacekeepers to leave the country, stirring fears the fragile West African state might plunge back into chaos.

The UN has refused Gbagbo’s order to withdraw its 10 000-strong Unoci force, and its chief human rights official accused Gbagbo’s security forces of involvement in dozens of alleged kidnappings and murders.

The European Union decided on Monday to slap visa bans on Gbagbo and 18 of his inner circle, diplomats said. The measure will take up to 48 hours to come into force, and a decision to freeze assets for the 19 will be taken separately.

Both Gbagbo and Ouattara claim to have won last month’s election, and both have had themselves declared president, but the incumbent has so far retained control of the official armed forces and of Abidjan’s ministry buildings.

Ouattara has been recognised as president by the international community, and is supported by the former rebel movement that controls Côte d’Ivoire north of the 2003 ceasefire line that divides the country into two armed camps.

But in the south, home to the government and the cocoa ports that dominate Côte d’Ivoire’s economy, his movements are limited to the grounds of the Golf Hotel, a luxury waterfront resort in Abidjan protected by UN “blue helmets”.

Meanwhile, in the poor suburbs of the city, there are reports of gangs in uniform raiding houses at night and “disappearing” suspected Ouattara backers.

On Sunday, UN High Commissioner for Human Rights Navi Pillay expressed concern about “the growing evidence of massive violations of human rights” in the restive West African country since Thursday.

“In the past three days there have been more than 50 people killed, and over 200 injured,” she said in a statement issued in Geneva, vowing “to ensure that perpetrators are held accountable for their actions”.

“Abducted persons are reportedly taken by force to illegal places of detention where they are held incommunicado and without charge. Some have been found dead in questionable circumstances,” Pillay added.

‘He needs to hold back his troops’
Paris also urged Gbagbo to restrain his forces, and warned Licorne would protect France’s estimated 15 000 expatriate citizens in Côte d’Ivoire, where they still have major economic interests 50 years after independence.

“If he does not want to have deaths on his conscience, he needs to hold back his troops,” Foreign Minister Michele Alliot-Marie told French media on Sunday.

But, rather than showing any signs of preparing to back down, Gbagbo has instead hardened his position and his most notorious lieutenant has embarked on a series of daily rallies around Abidjan to stir up hard-line supporters.

Youth minister and “Street General” Charles Ble Goude, who is under UN sanctions for “acts of violence by street militias, including beatings, rapes and extrajudicial killings”, vows to fight for Côte d’Ivoire’s sovereignty. — AFP

Faced with jihadist breakthrough in Burkina Faso, neighbouring states in the Gulf of Guinea increasingly fear attacks in their own territories
Read more
Advertising
Continue to the category
National