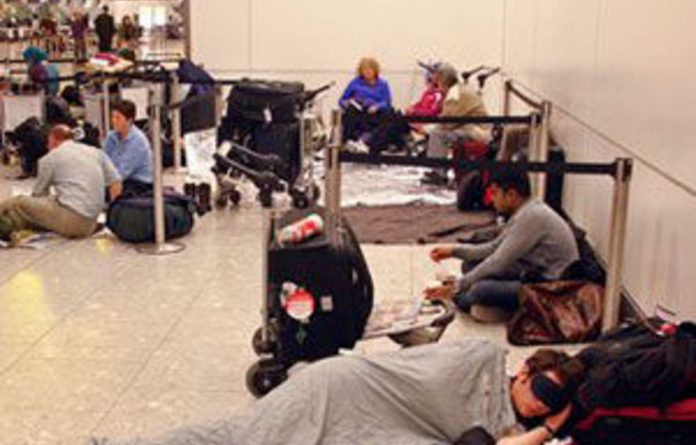 Heavy snow disrupted the Christmas holiday getaway in Europe, forcing the continent’s biggest airports to close and thousands of stranded passengers to spend the night on terminal floors.

In London, Paris, Frankfurt, Amsterdam and Brussels, flights were cancelled and airports warned of backlogs spilling well into this week, with snow and ice frustrating travel plans across Europe on the last weekend before December 25.

Hundreds of passengers had to sleep in terminals after becoming trapped in no-man’s land when their flights were diverted from affected airports and they were without a visa to leave transit lounges.

Heavy snow and thick ice all but closed London Heathrow, the busiest international passenger air hub in the world, over the weekend and travellers faced a third day stranded on Monday as arctic conditions sparked fresh flight delays and cancellations.

Britain’s roads and railways were also hit by the harsh winter weather, with some roads made impassable after drivers abandoned their vehicles in heavy snow and passengers being ejected on to freezing platforms from broken-down trains.

With forecasters predicting this month could be the coldest December for a century, Britain braced for further problems on Monday with up to 20cm of snow expected in some places.

At Heathrow, disappointment turned to anger and frustration for Christmas travellers as their wait dragged on. Some said they were running out of money, while others reported lengthy queues for toilets and plug sockets for cellphones.

Trevor Taylor, who had been waiting with his wife and two young sons for a flight for Singapore for two days, described conditions at Terminal 5 as “absolute mayhem”.

“Frustration is building up. I’ve been sleeping on a knobbly marble floor and every space you can see is taken,” the 37-year-old said.

There were a handful of arrivals and departures from Heathrow on Sunday, and the airport warned that disruption was set to continue.

Knock-on effects
A statement from Heathrow, which is operated by BAA, said the airport would provide a limited service from 6am GMT on Monday, but warned of knock-on effects from the weekend shutdown.

“We expect further cancellations and delays in the coming days, as airlines move diverted aircraft and crew back to their normal positions,” it said.

Hundreds of passengers also slept at London’s Gatwick airport on Saturday, although the situation there was improving on Sunday.

Other major airports, including London Stansted, London Luton, Birmingham, Glasgow and Bristol also faced delays and cancellations due to the weather.

Car breakdown service AA predicted it would answer about 14 000 call-outs on Sunday, double the average. Part of a major train route between London and Edinburgh was suspended, leaving hundreds of passengers stranded.

Airport authorities said about 3 000 people would spend the night in the terminal buildings. About 40% of Roissy flights from 3pm GMT were cancelled, affecting about 13 000 waiting passengers.

But the situation was expected progressively to return to normal on Monday, with Secretary of State for Transport Thierry Mariani stating: “Tomorrow’s [Monday] weather forecasts are better so hopefully we’ll get there.”

Mariani lashed out at British Airways, which he said had turned down an offer of places on Eurostar for its customers blocked in Paris after the closure of Heathrow.

The poor conditions forced Eurostar to cancel six of its trains between Britain, France and Belgium, the company announced, as other rail services warned of delays.

In The Netherlands several hundred people spent Saturday night at Amsterdam-Schiphol airport, where air traffic continued to be severely disrupted on Sunday.

In Belgium about 1 500 people were to spend a second night at Brussels airport, after up to 3 000 passengers slept there Saturday. Most of them were on 18 rerouted flights bound for Heathrow.

Sunday was Belgium’s 18th day of snowfall since the start of November, beating the previous record set in 1945.

One person died in the hardest-hit southern Wallonia region when the roof of a barn collapsed under the weight of snow.

In northern Italy the situation was improving after two days of chaos on the roads and in airports in Tuscany.

In the Balkans, four people froze to death over the weekend. Two men, aged 72 and 50, were found near Banja Luka in Bosnia, while an elderly couple were found dead by their neighbours in Serbia. — AFP