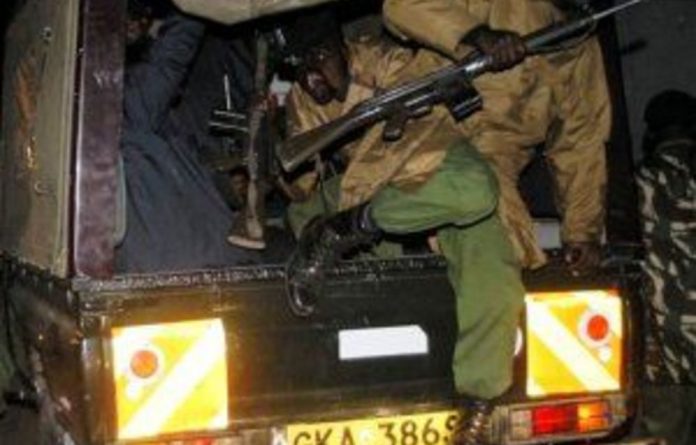 A bomb exploded on a bus in central Nairobi on Monday during a security search before it left for the Ugandan capital Kampala, killing three and wounding 23, Kenyan police said.

“Two more people have succumbed to injuries in hospital, the death toll is now three, including the owner of the luggage that exploded in the bus,” a senior Kenyan police officer at the scene told reporters.

“Twenty-three other people are admitted to hospital with various injuries,” he added, speaking on condition of anonymity.

He said a man who had abandoned a piece of luggage on a nearby street was arrested.

“We are now trying to link this luggage to the attack on the bus,” he said.

Kenyan Police Chief Mathew Iteere did not explicitly call the blast a terrorist attack but mentioned “an explosive device” in a piece of luggage as the source of the explosion.

An official with Kampala Coach Ltd said the attacker was among those wounded or killed by the blast, which went off when the suspect hastily abandoned his bag after realising that all luggage was being searched by security staff.

“Security guards were screening people when the explosion occurred. It came out of a bag that was at the entrance” of the bus, the man said.

“The owner of the bag abandoned his luggage there and, as he tried to escape, the explosion occurred and he was among those who were seriously wounded and taken to hospital but I understand he has passed away,” he added.

Uganda’s police chief, Kale Kayihura, had told AFP that the threats emanated from the Shebab, a Somali insurgent group which has pledged allegiance to al-Qaeda, and the Allied Democratic Forces, a Ugandan Islamist group.

His Kenyan counterpart said however that it was too early to link the Nairobi attack to the threats received by Kampala.

The al-Shabab claimed the coordinated bomb attacks and warned that any country supporting the central Somali government it is battling in Mogadishu and the rest of Somalia would be a target.

The motive behind the attacks on the police remains unclear and Kenya said it had asked the Federal Bureau of Investigation (FBI) to help it probe the incidents.

Following the attacks, Kenyan police arrested hundreds of people in the Eastleigh neighbourhood, an area overwhelmingly populated by Somalis.

“We have beefed up security in all parts of the city, particularly on congested streets and bus terminals. We want to ensure a similar attack does not occur,” he said.

At this time of year, Nairobi residents flock back to their hometowns upcountry for the holiday season while large numbers of tourists arrive to enjoy the warm weather on the coast and wildlife sanctuaries. — Sapa-AFP

Although the overall rate of conflict has remained steady in Africa during the past 10 weeks of the pandemic, the nature of this is changing in subtle but significant ways
Read more
Advertising
Continue to the category
National