Knysna on the rocks 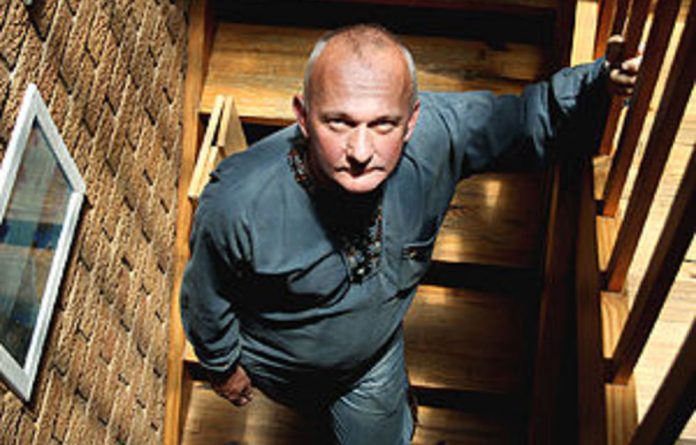 Peter Farrands is packing his vinyl record collection into a borrowed trailer.

Rust patches show through the lid and he wonders if it will keep rain out for the move to Pretoria.

Just a day before our interview, he earned his open-water diving licence between the Heads, the famous bronze cliffs of sandstone that flank the mouth of Knysna’s vast tidal estuary.

His tattooed arms and the parrot that sits on his shoulder make him an unlikely portrait of a teacher, but Farrands has a doctorate in English and teaches Cambridge history, literature and music to private students.

Several of his pupils have earned the distinction of reaching the worldwide top 10 in their Cambridge A-level examinations, and he has the certificates to prove it. Even so, his hourly rates are modest. At R145 an hour, the father of two boys earns R12 000 in a good month.

“Last year, it was going well,” he says. “But during the course of this year, more and more students couldn’t pay. Their parents are people whose businesses collapsed during the recession. When a father is a builder and he is not getting paid, I don’t get paid.”

Because he felt he couldn’t make the necessary commitment to the few students he had left, he resolved to leave and head for Pretoria, where the market is bigger. He hopes to return to the town he loves in a year or two.

“One just needs to drive around the industrial area and town,” says Ian Stewart, a chartered accountant and proprietor of Outeniqua Financial Services, “to see how many places are empty and how many houses are for sale. I see it with clients. I see how they struggle. Things are tough.”

For sale signs have become fixtures. Many are dilapidated and faded with age. Sellers try to refuse the low prices buyers offer for as long as possible. Many buyers can’t obtain credit to fund their purchases. “A luxury three-bedroom house recently sold for R1,5-million, in an upmarket suburb where empty stands commanded R1-million not two years ago,” says Stewart.

Distress
Pezula, the region’s most luxurious hotel and private residential estate development, has been fighting unions over retrenchments all year. It has ceded the unprofitable golf course to its residents’ association and has placed some of its most expensive accommodation — such as a three-mansion estate overlooking Noetzie beach, asking price R56-million — on the market.

Commercial and industrial properties are also in distress. Duncan Simpson, a principal at Huizemark, has sold them in Knysna for 30 years.

“Rental space has never been so readily available,” he says. “Landlords are negotiating rentals at less than last year’s rents. Certainly no increases are being achieved, since many businesses are just hanging on. The only increases I’ve seen are salary increases for municipal employees. Property sales have virtually come to a standstill, because companies are reluctant to invest in property where the rental stream is not guaranteed, while the holding costs escalate annually.”

Both Simpson and Stewart attribute the vacancies to a number of factors. Steep hikes in rates and taxes and water and electricity tariffs have gone in large part to fund a R135-million salaries bill that dwarfs the town’s R68-million capital expenditure budget. Neither has anything but harsh words for the million-plus pay packets of the town’s senior managers, while local residents and businesses are struggling. They claim to see no evidence of council money being spent in the townships and informal settlements around Knysna.

Another cause is the tighter regulation of the financial industry. “The control on granting credit,” says Simpson, “has resulted in banks that strangle businesses that have been around for many years, but now cannot obtain credit to fund their inventories.”

Though Knysna hosted not one but two teams during the World Cup, this expected boon brought little respite. Few business owners credit it with enough impact to justify the town’s expenditure on improved facilities.

Lynn Wallace, who runs Laguna Grove, says that while her self-catering apartments were booked full for the annual Oyster Festival she saw no business for the remainder of the World Cup period.

“On the positive side,” says Simpson, “we are seeing many foreign tourists now, which is unusual for this time of year. This trend was similar after the Rugby and Cricket World Cups, when tourists came six months later to have a good look around. But, unlike previous years, we don’t see many overseas investors coming into the market yet.”

‘Feeling the pinch’
Not only property and tourism but also the entire town, from food retail to home maintenance, is feeling the pinch. In the residential suburbs and townships, qualified builders, electricians, carpenters, painters and tilers are sitting idle.

Shaheed Isaacs has taken up car maintenance and works days at CRS Towing to make ends meet. But it wasn’t always this way.

“I’m a builder by trade,” he says. “I used to build houses and stuff. But from last year March, building started going down. Now I’m just surviving. No fireworks, everything’s just down, down, down.”

Isaacs lives in Hornlee, one of several working-class townships that form part of Knysna. “The skill was coming out of places like Hornlee and Nekkies and, for over a year, they’ve been sitting at home,” he says.

Holiday-house owners don’t even figure into his calculations for a potential market, and even the locals are keeping the available work tightly within networks of friends.

“Developers know exactly what the situation in Knysna is like,” he says. “So they exploit the fact that locals are undercutting each other just to make a living. Then a guy from George or Port Elizabeth comes in with farm labour or foreigners, and undercuts even them. In Hornlee, you’ll see the men sitting on the street corners.”

Stewart believes the municipal government’s modest capital expenditure won’t make much difference: “It depends who’s going to do the work. I don’t think it will filter down to most people in town. It will mostly go to the big guys from out of town, who always get this work.”

If the unemployed do survive, Isaacs explains how: “A lot of these people have wives and children who work as domestics, house sitters, shop cashiers and so on. The women keep the families going at the moment. There’s just no work for the men. Some catch fish to sell, but that’s also difficult nowadays because you need permits and all that stuff.”

Farrands is heartbroken to leave Knysna. His boys love it there, and it offers a great environment to raise them. It may be cold comfort to him but at least he is able to leave. As Isaacs puts it: “The people with lots of money can stay where they want, but the guys on the streets in Hornlee sit with nothing.”

Ivo Vegter is a freelance writer who lives in Knysna

Despite the DA having more seats in Knysna, the ANC has chosen the town’s mayor
Read more
Business

Heat is on insurance companies

South African treasures that should be on your radar

Silver Town: The picture of devastation

DA to oust mayor for voting against caucus instruction