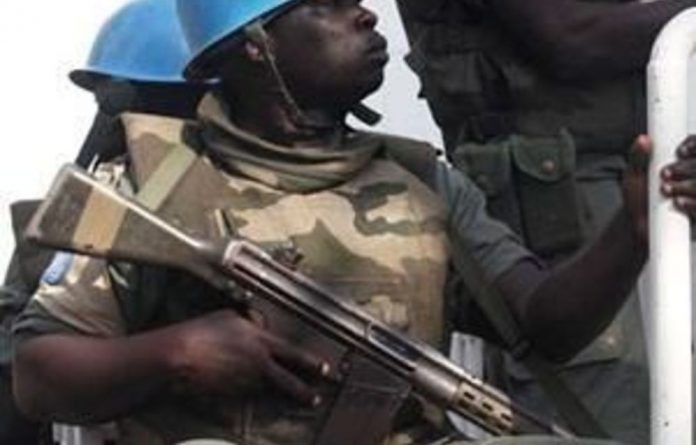 West African heads of state threatened on Friday to use force to oust incumbent Côte d’Ivoire leader Laurent Gbagbo unless he cedes power to a rival widely credited with having won a presidential election.

A violent stand-off over the result of the vote has killed nearly 200 people and threatens to tip the West African state, the world’s top cocoa producer, back into civil war.

After a meeting in Nigeria to discuss the crisis, leaders of the regional bloc Ecowas said they would send an envoy to tell Gbagbo, who has been president for a decade, that he must step down or face “legitimate force”.

Gbagbo’s government foreign minister Alcide Djedje told Reuters that his government was ready to meet the Ecowas envoys, saying that there was no need for a military intervention.

“What will an intervention force do? Whom will they attack? Do they plan to assassinate President Laurent Gbagbo?,” Djedje asked, adding that the military option was not unanimous within the heads of states of the bloc.

Djedje, a former Côte d’Ivoire ambassador to the United Nations, said Gbagbo’s government will meet the envoys on a date still to be decided, to explain their position and possible solution to the crisis.

World powers and African states have heaped political and financial pressure on Gbagbo to relinquish power after the November 28 vote in which electoral commission results showed he lost to rival Alassane Ouattara.

“In the event that Mr Gbagbo fails to yield this imputable demand of Ecowas [to stand down], the community will be left with no choice but to take other measures, including legitimate force,” a communiqué released by Ecowas said.

The bloc also said it would convene a meeting of member states’ defence chiefs of staff to plan for potential action, should Gbagbo not bow out.

The United States and European Union have imposed travel sanctions on Gbagbo and his inner circle, while the World Bank and the West African central bank have cut off his funding in an attempt to pressure him to step down.

But Gbagbo has shown no sign of caving in. He insists he won the election after the Constitutional Court, which is headed by one of his allies, threw out hundreds of thousands of votes from pro-Ouattara constituencies.

The stand-off turned violent last week after brief gun battles between government soldiers loyal to Gbagbo and rebels who now back Ouattara.

The impasse between Gbagbo and Ouattara has caused the deaths of more than 170 people, according to the council.

Money crunch
Gbagbo also faces a cash crunch that could make it hard for him to continue paying the wages of soldiers who back him, after the West African regional central bank cut his access to funds.

Ministers from the Central Bank of the West African Economic and Monetary Union said on Thursday that the bank would no longer recognise Gbagbo’s authority, and that access to funds would only be given to Ouattara’s “legitimate government”.

Ahoua Don Mello, spokesperson for Gbagbo’s government, said on state television on Friday that the decision to recognise Ouattara’s authority was illegal and could have severe consequences for the monetary union.

On Wednesday, the World Bank decided to freeze about $800-million in committed financing, strengthening expectations that Gbagbo may soon struggle to pay wages — including to troops.

Military support for Gbagbo is regarded as one of the main reasons he has been able to defy calls to step down.

Côte d’Ivoire’s $2,3-billion bond due in 2032 fell to a record low on Thursday as investors worried that the country would not meet a $30-million bond payment on December 31.

The turmoil in the country has pushed cocoa prices up to recent four-month highs, disrupting export registrations and raising the possibility that fighting could block transport and shipping.

Risk of war
Charles Ble Goude, leader of the powerful pro-Gbagbo “Young Patriots” movement, said earlier on Friday that sending in a military intervention force could rekindle war in Côte d’Ivoire, which is still partitioned from a 2002-03 civil conflict.

“In a union such as Ecowas, when one country is in difficulties, you don’t come and start a war in that country, but try to help find a solution. I don’t know what would be the objective of an intervention force. Kill Ivorians?” Ble Goude said in an interview on RFI radio.

In New York, the UN General Assembly recognised Ouattara by unanimously deciding that the list of diplomats he submitted to the world body be recognised as the sole official representatives of Côte d’Ivoire.

That appeared to bolster Ouattara’s claim to be the legitimate leader of Ivory Coast and deepened the isolation of Gbagbo, UN diplomats told Reuters.

The United States, United Nations, European Union, African Union and Ecowas have all recognised the provisional electoral commission results showing Ouattara as the winner. Washington and Brussels have imposed sanctions on Gbagbo and his coterie.

Deteriorating security in the former French colony led France this week to urge its 13 000 citizens there to leave.

The Dutch Defence Ministry said on Friday it was sending a warship to Côte d’Ivoire that could be used to help evacuate European expatriates if violence escalates. – Reuters